From Infogalactic: the planetary knowledge core
Jump to: navigation, search
For other people of the same name, see Alexios Komnenos (disambiguation).

Alexios Komnenos, latinised as Alexius Comnenus (Greek: Ἀλέξιος Κομνηνός), was the eldest son of the Byzantine emperor John II Komnenos and his wife Eirene of Hungary. He was born in February 1106 at Balabista in Macedonia, was made co-emperor with his father at 16 or 17 years of age and died on 2 August 1142 [1] at Attalia, Pamphylia. He was an elder brother of the emperor Manuel I Komnenos, and had a twin sister, Maria Komnene (plus other siblings).

Alexios was made co-emperor by his father in 1122, but died in 1142. This was the year before his father's death as the result of a hunting accident. The reign of John II is less well chronicled than those of his father, Alexios I, or successor, Manuel I, and coverage of the life of his son Alexios is very sparse.

A panegyrical poem by Theodore Prodromos was addressed to John and his son on the occasion of the coronation of Alexios. It hailed both rulers as "kings born of kings and emperors, reformers of old customs and privileges, with whom the august throne and sceptre-bearing are a paternal acquisition, a matter of inheritance."[2]

His final illness is described: "...of the severest kind and of short duration, took the form of a rushing fever attacking the head as though it were an acropolis."[1] The location of Alexios' death, at Attalia, suggests that he was on campaign with his father, who had established this city as a base from which to pacify the inland areas around Lake Pousgousē (probably the modern Beyşehir Gölü).[3] Alexios' younger brother Andronikos was charged with escorting the body back to Constantinople, however, while discharging this duty, he too was taken ill and died.[4] 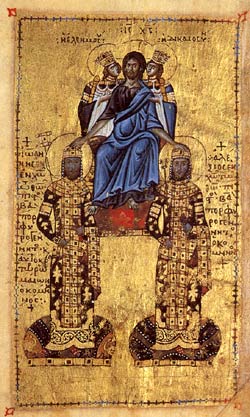 The identity of his wife is uncertain. It is possible he was married twice, the first wife being Dobrodjeja Mstislavna of Kiev, a daughter of Mstislav I of Kiev, and the second being Kata of Georgia, a daughter of David IV of Georgia. While both women are known to have married members of the Komnenoi family, several theories have been suggested as to the identities of their husband or husbands.[5]

His daughter Maria Komnene married the pansebastos Alexios Axuch. He was the son of John Axuch, the megas domestikos (commander-in-chief of the Byzantine army), who was a close friend of John II.[6] Alexios Axuch served as Duke of Cilicia and protostrator.[7] However he eventually fell out of favor with Manuel I Komnenos in 1167. John Kinnamos and Niketas Choniates report that the accusations against him included practice of witchcraft. He and an unnamed "Latin" wizard were accused of causing the pregnancy of Maria of Antioch, the Empress consort, to result in a miscarriage. They supposedly managed to do so by providing drugs to Maria.[8] Alexios ended his life as a monk.[7] Maria Komnene, "wife of Alexios the protostrator" was mentioned in a seal. According to the Dictionnaire historique et Généalogique des grandes familles de Grèce, d'Albanie et de Constantinople (1983) by Mihail-Dimitri Sturdza, this Maria was suffering from insanity by the end of her life.[9]

They were the parents of John Komnenos "the Fat", a short-lived rival emperor to Alexios III Angelos. Theodora Axuchina, wife of Alexios I of Trebizond, is considered a possible daughter of John the Fat.[7]