From Infogalactic: the planetary knowledge core
Jump to: navigation, search
For the heads of the Russian Orthodox Church of the same name, see Patriarch Alexis of Moscow (disambiguation).

Aleksey Mikhailovich (Russian: Алексе́й Миха́йлович; IPA: [ɐlʲɪˈksʲej mʲɪˈxajləvʲɪtɕ]; 29 March [O.S. 19 March] 1629 – 8 February [O.S. 29 January] 1676) was the Tsar of Russia during some of the most eventful decades of the mid-17th century. His reign saw the Russian invasion of Polish–Lithuanian Commonwealth and war with powerful Sweden during the Deluge, the Raskol schism in the Russian Orthodox Church, and the Cossack revolt of Stenka Razin. On the eve of his death in 1676, the Tsardom of Russia spanned almost 2,000,000,000 acres (8,100,000 km2).

Born in Moscow on 29 March 1629, the son of Tsar Michael and Eudoxia Streshneva, Alexei acceded to the throne at the age of sixteen after his father's death on 12 July 1645. He was committed to the care of the boyar Boris Morozov, a shrewd and sensible guardian sufficiently enlightened to recognize the needs of his country, and by no means inaccessible to Western ideas.

Morozov's foreign policy was pacificatory. He secured a truce with the Polish-Lithuanian Commonwealth and carefully avoided complications with the Ottoman Empire. His domestic policy was scrupulously fair and aimed at relieving the public burdens by limiting the privileges of foreign traders and abolishing a great many useless and expensive court offices. On 17 January 1648 Morozov procured the marriage of the tsar with Maria Miloslavskaya, himself marrying her sister, Anna, ten days later, both daughters of Ilya Danilovich Miloslavsky (1594–1668).

Morozov was very unpopular however, regarded as a typical self-seeking 17th-century boyar, and was generally detested and accused of sorcery and witchcraft. In May 1648 the people of Moscow rose against them in the so-called Salt Riot, and the young Tsar was compelled to dismiss them and exile Boris to the Kirillo-Belozersky Monastery. Four months later, Boris was secretly allowed to return to Moscow, where he subsequently managed to regain some of his lost power.[1]

The popular discontent demonstrated by the riot was partially responsible for Alexis' 1649 issuance of a new legal code, the Sobornoye Ulozhenie.

From the very beginning of his reign, Alexei was faced with multiple rebellions scattered across Russia. After resolving the 1648 Salt Riot that had resulted in the temporary exile of Morozov, in 1650, Alexei faced two more rebellions in the cities of Pskov and Great Novgorod. Alexei put down the Novgorod rebellion quickly, but was unable to subdue Pskov, and was forced to promise the city amnesty in return for surrender. One man only had displayed equal tact and courage at Great Novgorod, the metropolitan Nikon, who in consequence became in 1651 the Tsar's chief minister.[1]

By the 1660s, Alexei's wars with Poland and Sweden had put an increasing strain on the Russian economy—Alexei's government had begun minting large numbers of copper coins in 1654, in an attempt to increase government revenue, but this instead led to a devaluation of the ruble and a severe financial crisis. As a result, angry Moscow residents revolted in the 1662 Copper Riot, which was put down violently.[1]

In 1669, the Cossacks along the Don in southern Russia erupted in rebellion. The rebellion was led by Stenka Razin, a disaffected Don Cossack who had captured the Russian terminus of Astrakhan. From 1670 to 1671, Razin seized multiple towns along the Volga River. The turning point in his campaign was his failed siege of Simbirsk in October 1670. Razin was finally captured on the Don in April 1671, and was drawn and quartered in Moscow.[1]

In 1651 Safavid troops and allied forces of the Safavid territories in Dagestan attacked Russian fortifications along the Sunzha, as the Safavids were seeking to strengthen their position in the North Caucasus. Safavid troops and allies (wali (governor) of Dagestan, Khan of Derbent, accompanied the troops. In 1653 Alexis, initially thinking about sending the Zaporozhian Cossacks, eventually decided to send an embassy to Persia for a peaceful settlement of the conflict. In August 1653 courtier Prince Ivan Lobanov-Rostov and steward Ivan Komynin traveled from Astrakhan to Isfahan. Shah Abbas II agreed to settle the conflict, stating that the conflict was initiated without his consent.

Wars against Poland and Sweden 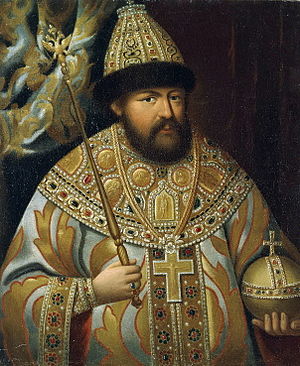 In 1653 the weakness and disorder of Poland, which had just emerged from the Khmelnytsky Uprising, encouraged Alexei to attempt to annex from her rival the old Rus’ lands. On 1 October 1653 a national assembly met at Moscow to sanction the war and find the means of carrying it out, and in April 1654 the army was blessed by Nikon, who had been elected patriarch in 1652.

The campaign of 1654 was an uninterrupted triumph, and scores of towns, including the important fortress of Smolensk, fell into the hands of the Russians. It was also during this war that Ukrainian Hetman Bogdan Khmelnitsky appealed to Tsar Alexei for protection from the Poles, and got it in the form of the Treaty of Pereyaslav which brought about Russian dominance of the Cossack Hetmanate in Left-Bank Ukraine.

In the summer of 1655, the sudden invasion by Charles X of Sweden for the moment swept the Polish state out of existence, in what became known as the Deluge. The Russians, unopposed, quickly appropriated nearly everything which was not already occupied by the Swedes, and when at last the Poles offered to negotiate, the whole grand-duchy of Lithuania was the least of the demands of Alexei. Fortunately for Poland, the Tsar and the king of Sweden now quarrelled over the apportionment of the spoils, and at the end of May 1656 Alexei, encouraged by the Habsburg emperor and the other enemies of Sweden, declared war.

Great things were expected of the Swedish war, but nothing came of it. Dorpat was taken, but countless multitudes were lost in vain before Riga. In the meantime Poland had so far recovered herself as to become a much more dangerous foe than Sweden, and, as it was impossible to wage war with both simultaneously, the Tsar resolved to rid himself of the Swedes first. This he did by the Peace of Kardis (2 July 1661), whereby Russia retroceded all her conquests.

The Polish war dragged on for six years longer and was then concluded by the Truce of Andrusovo (11 February 1667) Vitebsk, nominally for thirteen years, which proved the most durable of treaties. According to the truce, Polotsk and Polish Livonia were restored to Poland, but the more important Smolensk and Kiev remained in the hands of Russia together with the whole eastern bank of the Dnieper River. This truce was the achievement of Afanasy Ordin-Nashchokin, the first Russian chancellor and diplomat in the modern sense, who after the disgrace of Nikon became the Tsar's first minister until 1670, when he was superseded by the equally able Artamon Matveyev, whose beneficent influence prevailed to the end of Alexei's reign. 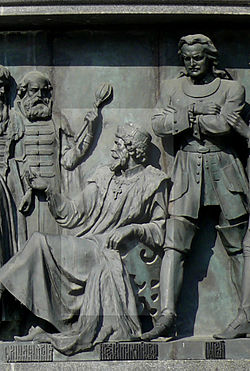 The image of Tsar Alexis turning his back to Peter the Great on the Millennium Monument in Novgorod.

When Charles I of England was beheaded by the Parliamentarians under Oliver Cromwell in 1649, an outraged Alexei broke off diplomatic relations with England and accepted Royalist refugees in Moscow. He also banned all English merchants from his country (notably members of the Muscovy Company) and provided financial assistance to "the disconsolate widow of that glorious martyr, King Charles I." [2]

Schism with the Old Believers

In 1653, Patriarch Nikon established a series of reforms that aimed to bring the practices of the Russian Orthodox Church into line with its Greek counterpart. Most notably, the church began to mandate the use of three fingers instead of two in making the sign of the cross. This resulted in significant dissent among the church community. Nevertheless, Alexei continued to support Nikon until 1658, when Nikon abandoned his post due to a personal insult, leaving the seat of the patriarch vacant.[3]

In 1666, the tsar convened the Great Moscow Synod, which was attended by Patriarch Macarios III of Antioch and Patriarch Paisius of Alexandria, in order to address the problems caused by Nikon. The synod agreed to formally depose Nikon, and also decided to excommunicate all who opposed the reforms of the church; those opponents broke away from the official Russian Orthodox Church to form the Old Believers movement.[3]

It is the crowning merit of the Tsar Alexei that he discovered so many great men (like Fyodor Rtishchev, Ordin, Matveyev, the best of Peter's precursors) and suitably employed them. He was not a man of superior strength of character, or he would never have submitted to the dictation of Nikon. But, on the other hand, he was naturally, if timorously, progressive, or he would never have encouraged the great reforming boyar Matveyev. His last years, notwithstanding the terrible rebellion of Stenka Razin, were deservedly tranquil.

Alexei's letters were first published by Pyotr Bartenev in 1856. They have earned him a place in the history of Russian literature, as assessed by D.S. Mirsky:

A few private letters and an instruction to his falconers is all we have of him. But it is sufficient for Sergey Platonov to proclaim him the most attractive of Russian monarchs. He acquired the moniker Tishayshy, which means "most quiet" or "most peaceful". He received this moniker through the ways he behaved- he would be kind and friendly, but the sounds created from instruments would provoke him. Certain aspects of Russian Orthodoxy, not its most purely spiritual, but its aesthetic and worldly aspects, found in him their most complete expression. The essence of Alexei's personality is a certain spiritual Epicureanism, manifested in an optimistic Christian faith, in a profound, but unfanatical, attachment to the traditions and ritual of the Church, in a desire to see everyone round him happy and at peace, and in a highly developed capacity to extract a quiet and mellow enjoyment from all things.[4]

Alexei's first marriage to Miloslavskaya was a success, and she bore him thirteen children in twenty-one years of marriage: five sons and eight daughters, and died weeks after her thirteenth childbirth. Four sons survived her, (Alexei, Fyodor, Semyon, and Ivan) but within six months two of these had died, including Alexei, the sixteen-year-old heir to the throne. 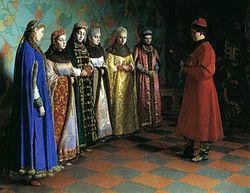 Tsar Alexei chooses his bride by Grigory Sedov (the winner of the Tsardom-wide contest organized by Boris Morozov was his relative Maria Miloslavskaya).

Alexei remarried on 1 February 1671, Nataliya Kyrillovna Naryshkina ( 1 September 1651 – 4 February 1694). She was brought up in the house of Artamon Matveyev and was a ward of his wife, the Scottish-descended Mary Hamilton.