Alfa Romeo in Formula One

Alfa Romeo participated in Formula One, as both a constructor and engine supplier, from 1950 to 1988. 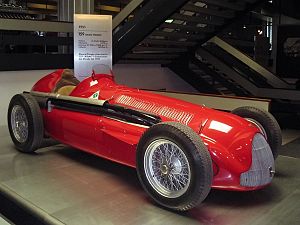 Alfa Romeo had often been a force in Grand Prix racing before World War II. Cars like the P2 and the P3 were winners on a regular basis until the German Mercedes and Auto Union cars came around in 1934; Alfa by this time had withdrawn temporarily as a manufacturer from racing, but continued to give direct support to privateers like Enzo Ferrari and his Scuderia Ferrari team. From 1934 to the start of World War II in 1939, Alfa rarely won and their cars looked rather outdated and badly built compared to the high-tech Silver Arrows. Alfa was able to make the 158 for the 1938 season, although this car was not really competitive against the Silver Arrows; but was to become totally dominant later on; Alfa continued to use this car at Grand Prixs in 1946 to 1949. When the new Formula One World Championship had come around, Alfa had absolutely dominated post-WWII racing from 1946 to 1949- winning every Grand Prix they entered with the exception of 3.

In 1950 Nino Farina won the inaugural World Championship of Drivers in a 158 with supercharger, in 1951 Juan Manuel Fangio won while driving an Alfetta 159 (an evolution of the 158 with a two-stage compressor). The Alfetta's engines were extremely powerful for their capacity: in 1951 the 159 engine was producing around 420 bhp (310 kW) but this was at the price of a fuel consumption of 125 to 175 litres per 100 km (1.5 mpg–U.S. / 3 mpg–imp).[1] In 1952, facing increased competition from their former employee, Ferrari; Alfa Romeo, a state-owned company, decided to withdraw after a refusal of the Italian government to fund the expensive design of a new car to replace their 13-year old workhorse. Surprisingly, Alfa Romeo involvement in racing was made with a very thin budget, using mostly pre-war technology and material during the two seasons. For instance the team won two championships using only nine pre-war built engine blocks.

During the 1960s, several minor F1 teams used Alfa Romeo straight-4 engines in cars such as the LDS Mk1 and Mk2 "Specials", Coopers and De Tomasos.[2]

In the end of 1960s Alfa Romeo was developing a new V8 engine for its racing cars, this engine was tested briefly in Cooper T86C F1-3-68 by Lucien Bianchi.[3] Alfa Romeo briefly returned to Formula One for the 1970 and 1971 seasons with a V8 engine based on their sportscar unit. In 1970 the unit was mainly entrusted to Andrea de Adamich, a long time Alfa driver, in a third works McLaren. The combination often failed to qualify and was uncompetitive when it did run in the races. In 1971 a similar arrangement saw de Adamich run most of the second half of the season in a works March car, with a similar lack of success. 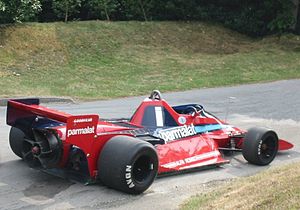 For 1976 Bernie Ecclestone did a deal for the Brabham Formula One team to use Alfa Romeo engines based on their new flat-12 sports car unit, designed by Carlo Chiti. The engines were free and produced a claimed 510 bhp (380 kW) against the 465 bhp (347 kW) of the ubiquitous Cosworth DFV; although the 12-cylinder Alfa engine was heavier and used more oil and water than the 8-cylinder DFV, because of more mechanical processes going on in it. Packaging the engines was difficult - they had to be removed in order to change the spark plugs - and the high fuel consumption engine required no fewer than four separate fuel tanks to contain 47 imperial gallons (214 L; 56 US gal) of fuel.[4] Gordon Murray's increasingly adventurous designs, like the BT46 which won two races in 1978, were partly a response to the challenge of producing a suitably light and aerodynamic chassis around the bulky unit.[5] When aerodynamic ground effect became important in 1978, it was clear that the low, wide engines would interfere with the large venturi tunnels under the car which were needed to create the ground effect. At Murray's instigation Alfa produced a narrower V12 design in only three months for the 1979 season, but it continued to be unreliable and fuel inefficient.[6] 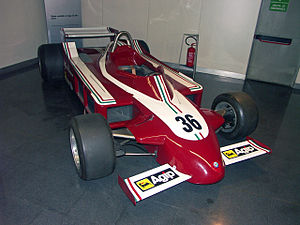 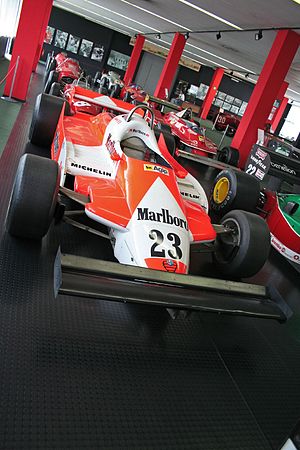 During 1977, and after some persuasion by Chiti, Alfa Romeo gave Autodelta permission to start developing a Formula One car on their behalf. Thus named the Alfa Romeo 177, the car made its debut at the 1979 Belgian Grand Prix. The partnership with Brabham had finished before the end of the season, with Bernie Ecclestone's outfit returning to Ford/Cosworth DFV engines. This second Alfa works Formula One project was never truly successful during its existence from the middle of 1979 until the end of 1985. During this period Alfa Romeo achieved two pole positions, Bruno Giacomelli led much of the 1980 United States Grand Prix before retiring with electrical trouble, three 3rd places, two 2nd places and one fastest lap. They also endured tragedy when their driver Patrick Depailler was killed testing for the 1980 German Grand Prix at the Hockenheimring. In 1981 they had the services of Mario Andretti, but continued to be dogged by poor reliability. After a restructuring of Autodelta, the team operations and design of the car were outsourced to Euroracing in 1982, with the works engines still being supplied by Autodelta.[7] The team's best season was 1983 when the team switched to the turbocharged 890T V8 engine and achieved 6th place in the constructors' championship, largely thanks to two second-place finishes for Andrea de Cesaris.

While the turbocharged 890T proved competitive in 1983, more powerful and fuel efficient engines from BMW, Ferrari, Renault, TAG-Porsche and Honda,[citation needed] plus the FIA imposed 220 litre fuel limit with no re-fuelling allowed during pit stops during 1984, saw the decline of the Euroracing Alfa Romeo team as a competitive force in Grand Prix racing. The 890T (the only turbo V8 engine used in GP racing at this time) was very thirsty and suffered badly at fast circuits- particularly both of Alfa's home circuits of Imola and Monza. In order to temporarily rectify this problem, the team had to run with less boost in order to save fuel- which made the engine underpowered, and this proved to be a severe hindrance at fast circuits- the kind of circuits where they almost always had to do that. The engine was developed but the fuel consumption problems were never really rectified. Riccardo Patrese's third-place finish at the 1984 Italian Grand Prix being the last podium finish for the team, with both Patrese and Eddie Cheever often failing to finish races throughout 1984 and 1985 due to running out of fuel- Cheever ran out of fuel 5 laps before the end at Alfa's home Grand Prix at Monza- close to Alfa's headquarters in Milan.

The team's 1985 car, the Alfa Romeo 185T proved to be so uncompetitive that the 1984 car, the 184T was re-called into service mid-season. After being updated to 1985 specifications the car, now dubbed the 184TB, was actually an improvement over the 1985 car, but results were still not forthcoming. In an interview he gave in 2000, Riccardo Patrese described the 185T as "the worst car I ever drove".

Alfa Romeo pulled out of Formula One as a constructor following the final race of the 1985 season in Australia.

For the 1987 season, Alfa Romeo made a deal to supply engines to Ligier. A Gianni Tonti designed, 850 bhp (634 kW; 862 PS) twin turbo 1500 cc straight-4 named the Alfa Romeo 415T was tested in a Ligier JS29 by René Arnoux.[8] When Fiat (the same company that owns F1 giant Ferrari) took control of Alfa Romeo, the deal was cancelled (ostensibly due to negative remarks by Arnoux about the engine, comparing it to used food) and Ligier had to use Megatron (ex BMW) engines for the entire 1987 season.[9]

By 1988, the last turbo season, Alfa was fed up with the negative publicity generated by Enzo Osella's cars, so the Milan-based manufacturer prohibited the further use of its name in connection with the engine. The 1988 engines were simply dubbed "Osella V8". At the end of that season, the relationship finished, ending Alfa Romeo's involvement in Formula One. 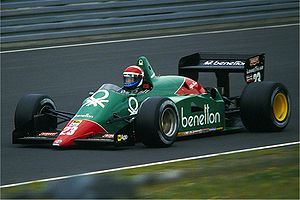 In 1985 Alfa Romeo started a V10 Formula One engine project, in anticipation of the upcoming rules forbidding turbo engines. The engine was targeted to be used with Ligier Formula One cars. This was the first modern V10 Formula One engine, followed soon by Honda and Renault engines. In its first stage the 3.5 litre engine produced 583 hp (435 kW) and the last version from 1986 could produce 620 bhp (460 kW) at 13300 rpm. After the co-operation with Ligier was cancelled the engine was available to the 164 Pro Car project.[11]

In 1988 Alfa Romeo (Fiat Group) bought Motor Racing Developments Ltd. (otherwise known as the Brabham F1 team) to build a chassis for a new ProCar series.[12] The car developed was V10 powered Alfa Romeo 164 ProCar (Brabham BT57[13]) and was planned to race in a special racing series (as a support event to Formula One Grands Prix).