During its history, Alfa Romeo has competed successfully in many different categories of motorsport, including Grand Prix motor racing, Formula One, sportscar racing, touring car racing and rallies. They have competed both as a constructor and an engine supplier, via works entries (usually under the name Alfa Corse or Autodelta) and private entries. The first racing car was made in 1913, three years after the foundation of A.L.F.A., the 40-60HP had 6 liter straight-4 engine. Alfa Romeo quickly gained a good name in motorsport and gave a sporty image to the whole marque. 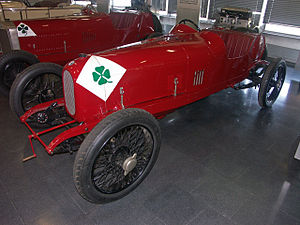 Alfa Romeo started motor racing almost immediately after it was founded. A.L.F.A. ventured into motor racing in 1911, with drivers Franchini and Ronzoni competing in the Targa Florio with two 24 HP models.[1] The marque's first success came in 1913 when Nino Franchini finished second in Parma-Poggio Berceto race with a 40-60HP. Giuseppe Merosi built a very advanced racing car in 1914, which was named the Grand Prix.[2] In 1920 Giuseppe Campari won the race at Mugello with a 40-60HP, whilst Enzo Ferrari was second in Targa Florio in the same year. A year later Giuseppe Campari won at Mugello again. Ugo Sivocci won the 1923 Targa Florio with an RL and Antonio Ascari took second. Sivocci's car was painted with the green cloverleaf on a white background that was to become Alfa's good luck token. 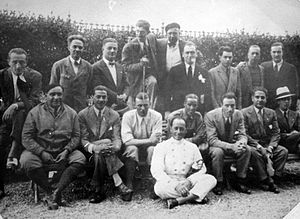 In 1923 Vittorio Jano was lured to Alfa from Fiat, designing the motors that gave Alfa racing success into the late 1930s. (When Alfa began to lose in the late 1930s Jano was promptly sacked.) In 1925 Alfa Romeo won the first Automobile World Championship in the history of automobile racing. Over 4 rounds the Alfa Romeo P2 won the European Grand Prix at Spa and the Italian Grand Prix at Monza, and hence incorporated the laurel wreath in their logo.

For 1932 Jano produced the sensational P3 which won its first race driven by Tazio Nuvolari at the Italian Grand Prix, 5 more Grands Prix that year were shared by Nuvolari and Rudolf Caracciola. Alfa Corse closed for 1933 and locked the cars in the factory, but they eventually transferred them to Enzo Ferrari's now privatised 'factory' team Scuderia Ferrari. P3s then won six of the final 11 events of the season including the final 2 major Grands Prix in Italy and Spain.

In 1934 Louis Chiron won the French Grand Prix in the P3 whilst the German Silver Arrows dominated the other 4 championship events. However the P3s won 18 of the 35 Grands Prix held throughout Europe. 1935 was even tougher, the P3 was simply outclassed by the remorseless Silver Arrows, but Tazio Nuvolari gave the P3 one of the most legendary victories of all time by winning the 1935 German Grand Prix at the Nürburgring. The P3 managed 16 victories in 1935.

In the 1930s Tazio Nuvolari won the Mille Miglia in a 6C 1750, crossing the finishing line after having incredibly overtaken Achille Varzi without lights (at nighttime). Alfa Romeos won the Targa Florio six times in row in the 1930s. and the Mille Miglia every year from 1928 to 1938 except for 1931.

The 8C 2300 won the Le Mans 24 Hours from 1931 to 1934, with Alfa Romeo withdrawing from racing in 1933 when the Italian government took over, and the racing of Alfas was then taken up by Scuderia Ferrari as Alfa's outsourced team. (Enzo Ferrari drove for Alfa before he went on to manage the team, and after that went on to manufacture his own cars.)

In 1935 Alfa Romeo won the German Grand Prix with Nuvolari.

In 1938 Biondetti won the Mille Miglia in an 8C 2900B Corto Spider, thereafter referred to as the "Mille Miglia" model.

Alfa Romeo participated in Formula One, both as a constructor and engine supplier, from 1950 to 1988.

The works Alfa Romeo team dominated the first two years of the Formula One World Championship, using the pre-war Alfetta, but withdrew from Formula One at the end of 1951.

For the 1987 season, Alfa Romeo made a deal to supply engines to Ligier, but the deal was cancelled when Fiat took control of Alfa Romeo.

Alfa Romeo also supplied engines to the tiny and unsuccessful Italian Osella team from 1983 to 1988. 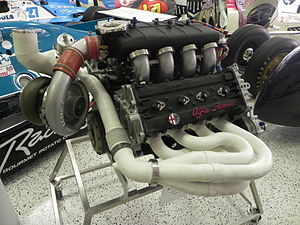 From 1989 to 1991, Alfa Romeo supplied engines to the IndyCar World Series. The 2648 cc, turbocharged V8 engine produced 720 bhp,[6] and was partly developed from the unraced Ferrari 637 Indy car. The engine was mated to a chassis specially built by March and prepared by Alex Morales Motorsports in 1989, with Roberto Guerrero at the wheel. Guerrero only managed a best of 8th place at Detroit, before both driver and engine moved onto Patrick Racing for 1990, again with a March chassis. That season proved to be an improvement, as Guerrero finished 16th place in the points standings, with a best finish of 5th place. The next year would be Alfa's last. The team switched to a Lola chassis, and Danny Sullivan took over the drive, finishing 11th in the points, with a best finish of 4th. In the end, Alfa Romeo would finish its Champ Car project without scoring a single podium, pole position or race win.

Alfa Romeo cars has been used in rallying also, mostly with private teams. In 1958 Alfa Romeo Giulietta won the Rally Finland. Racing versions of the Alfetta GT and GTV were built by Autodelta in the 1970s, initially with the normally aspirated engine from the earlier GTAm racer, for homologation under FIA Group 2. In this form they were rallied with moderate success in 1975, winning the Elba and Costa Brava rallies overall, as well as winning the Group 2 category in the World Rally Championship's Corsican event. In 1980 the Alfetta GTV Turbodelta was already homologated in FIA Group 4, since the required number of production cars had been built. A racing version was campaigned in rallies, but once more the effort was abandoned after a single season, despite scoring a win at the Danube Rally. In 1986 Alfa Romeo GTV6 was one of the fastest Group A rally cars.[7] However FIA put it to Group B in the end of 1986, this made it go from winner car to a car which was drawn away from rallying. The GTV6 placed 3rd in 1986 Tour de Corse.

On March 6, 1963, Alfa Romeo's racing department, Autodelta, was established, to run Alfa Romeo's sportscar programme, directed by ex-Alfa Romeo and Ferrari engineer, Carlo Chiti. Competing with the Alfa Romeo TZ, the team began to collect class wins, but faced strong competition from the Porsche 904 and realised they would need a new design if they were to achieve outright victories. Carlo Chiti and the Audodelta team, designed a new 90 degree V8 engine for their Alfa Romeo Tipo 33 sportscar and ultimately a flat-12 engine for the Alfa Romeo 33 TT 12. These cars were raced in the World Sportscar Championship from 1967 to 1977, with the 3-litre TT 12, winning title in 1975 and SC 12 in 1977. The company developed a Group C prototype in the early 1990s, codenamed the SE 048SP, but this never raced. 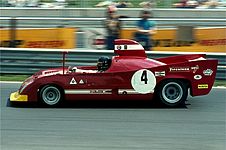 The Alfa Romeo 159 has also won the Bathurst 12 Hour race on three consecutive occasions at the diesel fuel category from 2007. 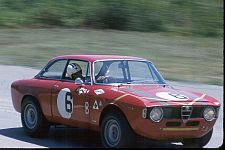 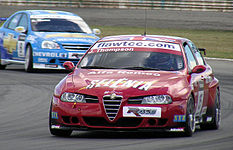 Alfa Romeo 156, driven by James Thompson, during the 2007 WTCC round at Curitiba.

Alfa Romeo has won the following major victories and championships:[5]