Alfonso, Duke of Anjou and Cádiz

Alfonso, Duke of Anjou, Duke of Cádiz, Grandee of Spain (Alfonso Jaime Marcelino Manuel Víctor María de Borbón-Segovia y Dampierre, French citizen as Alphonse de Bourbon) (20 April 1936 – 30 January 1989) was a grandson of ex-King Alfonso XIII of Spain, a potential heir to the throne in the event of restoration of the Spanish monarchy, and a Legitimist claimant to the defunct throne of France as Alphonse II.

Alfonso was born in the Clinica Santa Anna in Rome,[1] the elder son of Infante Jaime, Duke of Segovia, King Alfonso's second of four sons. His mother was Jaime's first wife, Donna Emanuela de Dampierre, daughter of the Franco-Italian Duke de San Lorenzo.[2] The Segovias lived in Rome where Jaime's father had maintained a royal court-in-exile since the royal family fled Spain following the 1931 election of republicans and socialists in Spain's major cities. Alfonso was baptised at the Palazzo Ruspoli on the Via del Corso in Rome, home of his maternal grandmother, Donna Vittoria Ruspoli dei principi di Poggio Suasa, by Cardinal Eugenio Pacelli (later Pope Pius XII).[3]

In 1941 Alfonso and his parents followed his English-born grandmother, Queen Victoria Eugenie to Lausanne in Switzerland. They lived first at the Hotel Royal, before Alfonso and his younger brother Gonzalo were sent to the Collège Saint-Jean (later Villa St. Jean International School) in Fribourg.[4] On 8 December 1946 Alfonso made his first communion with his brother, Gonzalo; on the same day he was confirmed by Cardinal Pedro Segura y Sáenz, Archbishop of Seville.[5]

The king's eldest son, Alfonso, Prince of Asturias, had inherited hemophilia from his maternal great-grandmother Queen Victoria, yet had been considered Spain's heir apparent until the republic was established in 1931. In 1933 he renounced any claim to inherit the Spanish throne (in the event of a restoration) to marry a Cuban commoner, Edelmira Sampedro-Ocejo, and was dead of internal bleeding following a minor auto accident by September 1938. Next in the line of succession, Infante Don Jaime, deaf and largely mute, was persuaded to renounce his claim (and that of future descendants) at the same time as his elder brother, thereby assuming the Duke of Segovia title and clearing the way for King Alfonso's third son, Don Juan, Count of Barcelona to take up the monarchist cause on behalf of the banished dynasty.[6] There being no need for Segovia to contract a dynastic alliance, Emanuela de Dampierre's noble rather than royal background was looked upon approvingly by the former king and former queen when the couple wed in Rome in 1935, and neither style nor title is attributed to Alfonso de Borbón-Segovia y Dampierre in the 1944 edition of the Almanach de Gotha.[7]

During the Spanish civil war which began in July 1936 Franco emerged as the Caudillo of the Falangist movement, overturning the republic and promising restoration, yet consolidating his grip on power in Madrid. Following Alfonso XIII's death in Rome in February 1941, Franco wrote Don Juan, acknowledging him as rightful heir to the throne (though without inviting him to occupy it), implicitly confirming that he considered Segovia and his sons excluded from the royal succession.[6] Although in 1947 Franco promulgated, and voters approved, a succession law which defined Spain as a kingdom, it also empowered Franco to decide whom to enthrone and when.[6] Don Juan responded by issuing the Estoril Manifesto which affirmed the traditional order of succession, and followed up with comments embracing a democratic monarchy.[6] The new law allowed Franco or his successor to choose any man "of royal lineage" as king,[6] and Alfonso was mentioned that year as a possible alternative to Don Juan and his son, Juan Carlos, should Franco consider the former too liberal to reign over a Falangist Spain.[6]

In December 1949 Segovia retracted his renunciation as coerced and claimed that he was the rightful claimant to Spain's crown.[6] Relations between Don Juan and Franco continued to deteriorate and in 1952 the latter prevailed upon Segovia to send his elder son to Spain to be educated under his guidance.[6] Reluctantly, Alfonso moved from Switzerland to Spain, initially to study law at Deusto University and, in 1955 to attend the elite Centro de Estudios Universitarios (CEU).[6] By 1956 Franco was diverting sponsors of some civic events from Juan Carlos, who was also being educated in Spain under the Caudillo's supervision, to Alfonso.[6] By 1964 Franco considered Juan Carlos his preferred candidate for the throne over his father, but also considered that if the latter deviated from obedience to Franco or loyalty to his Movimiento Nacional, Alfonso was a suitable alternative.[6] Alfonso's strongest supporter in Franco's government was Jose Solis, minister and secretary-general of the Movimiento.[6] Anticipating that Franco would soon offer to declare him Spain's next king rather than Don Juan, in June 1969 Juan Carlos warned his father that if he declined Franco's offer, Alfonso would be invited to accept the crown, nevertheless Don Juan refused to consent to being bypassed.[6] Nonetheless on 12 July 1969 Franco offered to designate Juan Carlos king whenever he stepped down from power, and Juan Carlos accepted.[6]

Asked by Juan Carlos to be chief witness at the ceremony declaring him successor and Prince of Spain, Alfonso immediately agreed to do so and sent some of his supporters to visit his father in Paris to persuade him to express no opposition publicly.[6] In return for his full support, Franco later appointed Alfonso Spain's ambassador to Sweden.[6] But in June 1972, after he had taken up that post, Alfonso advised Franco's foreign minister Laureano López Rodó that he deemed his support conditional upon his cousin's continued loyalty to the Franco regime. He further hinted that Spain's law of succession should be amended to facilitate Alfonso's replacing or succeeding Juan Carlos as Franco's heir or on the throne, if circumstances called for such a change.[6]

On 8 March 1972, in the Palace of El Pardo in Madrid, Alfonso married Doña María del Carmen Martínez-Bordiú y Franco, daughter of Don Cristóbal Martínez-Bordiú, 10th Marquis de Villaverde, and of his wife, Doña Carmen Franco y Polo (Franco’s only daughter. Doña Carmen was granted a title in 1975 becoming the 1st Duchess de Franco after Franco’s death). The witnesses of the marriage were Franco and Alfonso's mother. Alfonso and Carmen separated in 1979, received a civil divorce in 1982 and an ecclesiastical annulment in 1986.

On 22 November 1972, General Franco awarded Alfonso the Spanish title Duque de Cádiz with the dignity Grandee of Spain, and he received the style of Royal Highness. The Cádiz title had been held by Alfonso's great-great-grandfather, the Infante Francisco de Asís.

Since Alfonso's mother was not born a princess of royal descent, his grandfather Alfonso XIII did not consider young Alfonso in line to the Spanish throne in accordance with the Pragmatic Sanction of 1776. Alfonso's father Jaime, however, came to assert that his sons were French dynasts entitled to the style of Royal Highness.[8]

In Spain up until 1972 Alfonso was generally addressed as Don Alfonso de Borbón y Dampierre. Elsewhere he was often addressed as a prince.[7]

From his birth Alfonso was considered a prince du sang by those legitimists who believed that Alfonso XIII was also the heir to the French throne. When his grandfather died on 28 February 1941, Alfonso's father Jaime succeeded him in this French claim; Alfonso was thereupon recognised by the legitimists as Dauphin of France.

On 25 November 1950, Alfonso received the title Duc de Bourbon (Duke of Bourbon) from his father.[9] In 1963 Alfonso engaged the French historian and ardent royalist Hervé Pinoteau as his private secretary. Pinoteau remained with him until the duke's death.[10]

On 20 March 1975, Alfonso's father Jaime died; he was immediately recognised by his supporters as King Alphonse II of France. On 3 August 1975, he took the courtesy title Duc d'Anjou (Duke of Anjou).[11]

Alfonso and Carmen had two sons:

After Alfonso and Carmen were civilly divorced, Alfonso obtained custody of his two sons. On 7 February 1984 in Pamplona, Alfonso was driving home with his sons from a ski trip in the Pyrenees. His car collided with a truck. His eldest son Francisco de Asís was killed in the accident; his younger son Luis-Alfonso was in hospital for a month; Alfonso himself required six operations.[12] A Spanish court granted Carmen temporary custody of Luis-Alfonso, but, six months later, the court restored custody to Alfonso.[13]

Lawsuit of the Count of Clermont against the Duke of Anjou 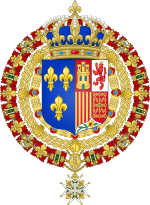 In 1987, Prince Henri of Orléans, Count of Clermont, eldest son of Henri, Count of Paris, the then Orléanist claimant to the defunct throne of France, initiated a court action against Alfonso for his use of the title Duke of Anjou and the coat-of-arms France Moderne (three fleur-de-lis or); Henri asked the court to fine Alfonso 50,000 French francs for each future violation. In 1988, Prince Ferdinand, Duke of Castro and Prince Sixtus of Bourbon-Parma joined Henri's lawsuit in reference to the use of the title Duke of Anjou, but not in respect to the coat-of-arms. On 21 December 1988, the Tribunal de grand instance of Paris ruled that the lawsuit was inadmissible because the title's legal existence could not be proven; that neither the plaintiff (Henri) nor the intervenors (Fernando and Sixtus) had established their claims to the title; and that Henri was not injured from the use of the plain arms of France by the Spanish branch of the Bourbon family.[14]

In 1989 Prince Henri d'Orléans and Prince Sixtus Henry of Bourbon-Parma appealed the judgment in the lawsuit about the use of a title and arms by Alfonso; the original judgment in favour of Alfonso was upheld.

Alfonso died in a skiing accident in Beaver Creek Resort, Eagle County, Colorado on 30 January 1989.[13] He collided with a cable which was being raised to support a banner at the finish line of a course at the FIS Alpine World Ski Championships.