Alfonso VI of León and Castile

Alfonso VI (before June 1040 – 29 June/1 July 1109), nicknamed the Brave (El Bravo) or the Valiant, was King of León from 1065, King of Castile and de facto King of Galicia from 1072.[1] After the conquest of Toledo in 1085 he was also the self-proclaimed victoriosissimo rege in Toleto, et in Hispania et Gallecia (most victorious king of Toledo, and of Spain and Galicia).[2]

Alfonso was the second son of Ferdinand the Great and Sancha of León, the daughter of Alfonso the Noble and sister to Bermudo III of León. Following his defeat and killing of Bermudo in battle, Ferdinand was crowned King of León and Castile and called himself Emperor of Spain. When the kingdom was divided following his father's death, Alfonso was allotted León. Castile was given to his older brother Sancho and Galicia to his younger brother García. 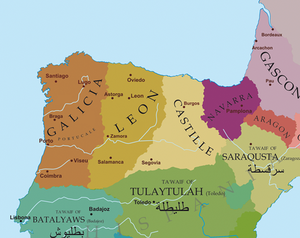 As the middle of three sons of King Ferdinand I of León and Sancha of León, Alfonso was allotted León when the kingdom was divided following his father's death, while Castile was given to his elder brother Sancho, Galicia to younger brother García, and sisters Urraca and Elvira given the cities of Zamora and Toro respectively. Each of the brothers was also assigned a sphere of influence among the Taifa states. Alfonso appears to have taken the first step in violating this division. In 1068 he invaded the Galician client Taifa of Badajoz and extorted tribute. In response, Sancho attacked and defeated Alfonso at Llantada but three years later, in 1071, they joined forces against García. Sancho marched across Alfonso's León to conquer García's northern lands at the time that Alfonso was in the southern part of the Galician realm issuing charters. García fled to the taifa of Seville, and the remaining brothers then turned on each other. This conflict culminated in the Battle of Golpejera in early January 1072. Sancho proved victorious and Alfonso was forced to flee to his client Taifa of Toledo. Later that year as Sancho was mopping up the last of the resistance, besieging his sister Urraca at Zamora in October, he was assassinated. This opened the way for Alfonso to return to claim Sancho's crown. García, induced to return from exile, was imprisoned by Alfonso for life, leaving Alfonso in uncontested control of the reunited territories of their father. In recognition of this and his role as the preeminent Christian monarch on the peninsula, in 1077 Alfonso proclaimed himself "Emperor of all Spain".

In the cantar de gesta The Lay of the Cid, he plays the part attributed by medieval poets to the greatest kings, and to Charlemagne himself. He is alternately the oppressor and the victim of heroic and self-willed nobles—the idealized types of the patrons for whom the jongleurs and troubadours sang. He is the hero of a cantar de gesta which, like all but a very few of the early Spanish songs, such as the cantar of Bernardo del Carpio and the Infantes of Lara, exists now only in the fragments incorporated in the chronicle of Alfonso the Wise or in ballad form.

His flight from the monastery of Sahagún (Safagún in Leonese language), where his brother Sancho endeavoured to imprison him, his chivalrous friendship with his host Almamun of Toledo, caballero aunque moro, "a knight although a Moor", the passionate loyalty of his vassal, Pero (Pedro) Ansúrez, and his brotherly love for his sister Urraca of Zamora, may owe something to the poet who regarded him as a hero.

They are the answer to the poet of the nobles who represented the king as having submitted to taking a degrading oath at the hands of Rodrigo Díaz de Vivar (El Cid) to deny intervention in his brother's death in the church of Santa Gadea at Burgos, and as having then persecuted the brave man who defied him.[clarification needed]

Alfonso VI stands out as a strong king whose interest was in law and order. He was a leader of his state during the Reconquista who was regarded by the Arabs as a very fierce and astute enemy, but also as a man who kept his word. A story of Muslim origin tells of how he responded to a challenge during a game of chess made by Ibn Ammar, the favourite of Al Mutamid, the King of Seville. They played chess on a very beautiful table and with a set of chess pieces belonging to Ibn Ammar. The table and the chess pieces were to go to Alfonso if he won. If Ibn Ammar won, then he could name the stake. The latter did win and demanded that the Christians should spare Seville. Alfonso kept his word.

Whatever truth may lie behind the romantic tales of the relationships and interactions between the Christians and the Muslims during the Reconquista, Alfonso personified the influences that were then shaping the character and civilisation of the Iberian peninsula.

Alfonso showed a greater degree of interest than his predecessors in increasing the links between Iberia and the rest of Christian Europe. The past marital practices of the Iberian royalty had been to limit the choice of partners to the peninsula and Gascony, but Alfonso had French and Italian consorts, and arranged to marry his daughters to French princes and an Italian king. His second marriage was arranged, in part, through the influence of the French Cluniac Order, and Alfonso is said to have introduced them into Iberia, established them in Sahagun and choosing a French Cluniac, Bernard, as the first Archbishop of Toledo after its 1085 conquest. He also drew his kingdom nearer to the Papacy, a move which encouraged French crusaders to aid him in the reconquest of the peninsula from Muslim control, and it was Alfonso's decision which established the Roman ritual in place of the old missal of Saint Isidore—the Mozarabic rite.

Signature of Alfonso VI, from a 1097 charter.

On the other hand he was tolerant towards the Arabs living in Iberia. He protected the Muslims among his subjects and struck coins with inscriptions in Arabic letters. He also admitted to his court and to his bed the refugee Muslim princess Zaida of Seville.[3]

Alfonso married at least five times and had two mistresses.[4][5][6][7] He is also thought to have been betrothed to a daughter of King William I of England, but her name is uncertain.[8] 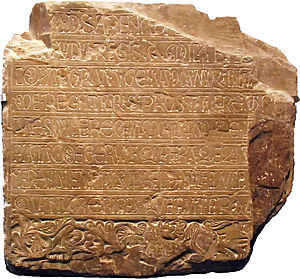 One other woman was reported by later sources to have been Alfonso's lover. The historian Abu Bakr Ibn al Sayraff, writing before 1161, stated that Alfonso abandoned Christianity for Zoroastrianism and had carnal relations with his sister Urraca, but then repented and was absolved, making pilgrimages to holy sites as penance. This has been followed by some later historians but others dismiss it as propaganda or misunderstanding.

Alfonso was defeated on 23 October 1086, at the battle of Sagrajas, at the hands of Yusuf ibn Tashfin, and Abbad III al-Mu'tamid, and was severely wounded in the leg. However, he recovered to continue as king of Leon and Castile.[12]

Alfonso's designated successor, his son Sancho, was slain after being routed at the Battle of Uclés in 1108, making Alfonso's eldest legitimate daughter, the widowed Urraca as his heir.[13] In order to strengthen her position as his successor, Alfonso began negotiations for her to marry her second cousin, Alfonso I of Aragon and Navarre, but died before the marriage could take place.