Having been forced into exile after the Glorious Revolution deposed his mother Isabella II from the throne in 1868, Alfonso studied in Austria and France. His mother abdicated in his favour in 1870, and he returned to Spain as king in 1874 following a military coup. Alfonso died aged 27 in 1885, and was succeeded by his unborn son, who became Alfonso XIII on his birth the following year. 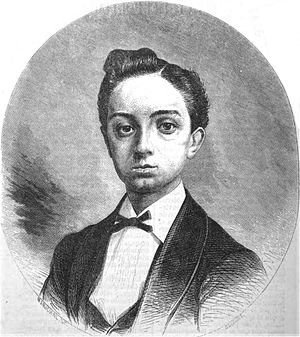 Alfonso was born in Madrid as the eldest son of Queen Isabella II. Officially, his father was her husband, King Francis. Alfonso's biological paternity is uncertain: there is speculation that his biological father may have been Enrique Puigmoltó y Mayans (a captain of the guard).[1] These rumours were used as political propaganda against Alfonso by the Carlists.

His mother's accession created the second cause of instability, which was the Carlist Wars. The supporters of the Count of Molina as king of Spain rose to have him enthroned. In addition, within the context of the post-Napoleonic restorations and revolutions which engulfed the West both in Europe and the Americas, both the Carlistas as well as the Isabelino conservatives were opposed to the new Napoleonic constitutional system. Much like in Britain, which subtracted itself from the liberal constitutional process, Spanish conservatives wanted to continue with the Traditional Spanish Organic Laws such as the Fuero Juzgo, the Novísima Recopilación and the Partidas of Alfonso X. This led to the third cause of instability of note, the "Independence of the American Kingdoms", recognized between 1823 and 1850.

When Queen Isabella and her husband were forced to leave Spain by the Revolution of 1868, Alfonso accompanied them to Paris. From there, he was sent to the Theresianum at Vienna to continue his studies. On 25 June 1870, he was recalled to Paris, where his mother abdicated in his favour, in the presence of a number of Spanish nobles who had tied their fortunes to that of the exiled queen. He assumed the title of Alfonso XII, for although no King of united Spain had borne the name "Alfonso XI", the Spanish monarchy was regarded as continuous with the more ancient monarchy represented by the 11 kings of Asturias, León and Castile also named Alfonso.

After Amadeo's abandonment in 1873, Parliament declared the Federal Republic (including Cuba, Puerto Rico and the Pacific Archipelagos), the first act of President Estanislao Figueras was to extend the Abolition Act to Puerto Rico. Cuban slaves would have to wait until 1889.

But the republicans were not in agreement either, and they had to contend with the War in Cuba, and Muslim uprisings in Spanish Morocco. In the midst of the crisis during and after the First Spanish Republic, the Carlist party made itself strong in areas with claims over their national and institutional specificity, such as Catalonia or the Basque districts. By 1872, the Third Carlist War erupted. This unrest led to the creation of a group in favor of the Bourbon restoration, made by some sectors of the conservatives led by Canovas del Castillo.

The Prince of Asturias, Alfonso, was the person chosen to develop the new road map proposed by Canovas, which led to the June 1870 abdication of Queen Isabel II in favour of her son Prince Alfonso. The new road map which indeed ended the eternal crisis begun in 1810 was called 'Alfonsismo' and the moderate centrist Cánovas del Castillo became the spokesman. As having Alfonso in Spain, would be a problem Cánovas became responsible for his education. So, he sent Alfonso to the Sandhurst Military Academy in England, where the training Alfonso received was severe but more cosmopolitan than Spain, given the current atmosphere.

On 1 December 1874, Alfonso issued the Sandhurst Manifesto, where he set the ideological basis of the Bourbon Restoration. It was drafted in reply to a birthday greeting from his followers, a manifesto proclaiming himself the sole representative of the Spanish monarchy. At the end of 1874, Brigadier Martínez Campos, who had long been working more or less openly for the king, led some battalions of the central army to Sagunto, rallied to his own flag the troops sent against him, and entered Valencia in the king's name.[citation needed] Thereupon the President resigned, and his power was transferred to the king's plenipotentiary and adviser, Antonio Cánovas. The 29 December 1874 military coup of Gen. Martinez Campos in Sagunto ended the failed republic and meant the rise of the young Prince Alfonso. 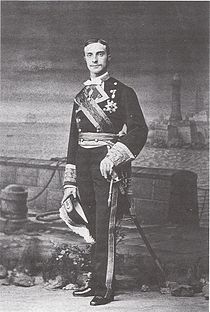 Alfonso XII in the uniform of the Supreme Commander of the Spanish Navy.

Within a few days after Canovas del Castillo took power as Premier, the new king, proclaimed on 29 December 1874, arrived at Madrid, passing through Barcelona and Valencia and was acclaimed everywhere (1875). In 1876, a vigorous campaign against the Carlists, in which the young king took part, resulted in the defeat of Don Carlos and the Duke's abandonment of the struggle.

Initially led by Canovas del Castillo as moderate prime minister, what was thought at one time as a coup aimed at placing the military in the political-administrative positions of power, in reality ushered in a permanent civilian regime that lasted until the 1931 Second Republic. Cánovas was the real architect of the new regime of the Restoration.

In order to eliminate one of the problems of the reign of Isabel II, the single party and its destabilizing consequences, the Liberal Party was allowed to incorporate and participate in national politics, and the 'turnismo' or alternation was to become the new system. Turnismo would be endorsed in the Constitution of 1876 and the Pact of Pardo Palace (1885). It meant that liberal and conservative prime ministers would succeed each other ending thus the troubles.

This led to the end of the Carlist revolts and the victory over the New York-backed Cuban revolutionaries, and led to a huge backing both by insular and peninsular Spaniards of Alfonso as a wise and able king.

Alfonso's short reign established the foundations for the final socioeconomic recuperation of Spain after the 1808–1874 crisis. Both European (the coastal regions, such as the Basque Country, Catalonia, and Asturias) and Overseas – Antilles and Pacific were able to grow steadily. Cuba and Puerto Rico prospered to the point that Spain's first train was between Havana and Camaguey, and the world's first telegraph was in Puerto Rico, as Samuel Morse lived there with his daughter, married to a Puerto Rican businessman. Upon the American invasion of Puerto Rico, ten US dollars were needed to buy one Puerto Rican peso.

On 23 January 1878 at the Basilica of Atocha in Madrid, Alfonso married his first cousin, Princess Maria de las Mercedes, daughter of Antoine, Duke of Montpensier, but she died within six months of the marriage. 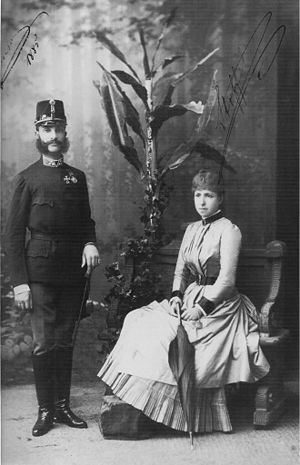 Alfonso XII and his second wife Maria Christina of Austria, 1885.

On 29 November 1879 at the Basilica of Atocha in Madrid, Alfonso married a much more distant relative, Maria Christina of Austria, daughter of Archduke Karl Ferdinand and Archduchess Elisabeth of Austria. During the honeymoon, a pastry cook named Otero fired at the young sovereign and his wife as they were driving in Madrid.

The children of this marriage were:

In 1881 Alfonso refused to sanction a law by which the ministers were to remain in office for a fixed term of 18 months. Upon the consequent resignation of Canovas del Castillo, he summoned Práxedes Mateo Sagasta, the Liberal leader, to form a new cabinet. 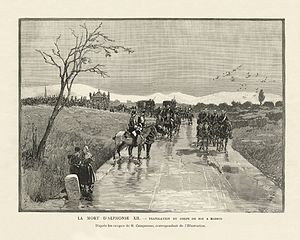 Funeral procession of Alfonso XII, from the 5 December 1885, issue of L'Illustration

Monument to Alfonso XII, erected in 1922 in the Parque del Buen Retiro, Madrid.

In November 1885, Alfonso died, just short of his 28th birthday, at the Royal Palace of El Pardo. He had been suffering from tuberculosis, but the immediate cause of his death was a recurrence of dysentery.[3]

In 1902, his widow Maria Cristina initiated a national contest to build a monument in memory of Alfonso. The winning design, by José Grases Riera, was erected in an artificial lake in Madrid's Parque del Buen Retiro in 1922.

Coming to the throne at such an early age, Alfonso had served no apprenticeship in the art of ruling, but he possessed great natural tact and a sound judgment ripened by the trials of exile. Benevolent and sympathetic in disposition, he won the affection of his people by fearlessly visiting districts ravaged by cholera or devastated by earthquake in 1885. His capacity for dealing with men was considerable, and he never allowed himself to become the instrument of any particular party. During his short reign, peace was established both at home and abroad, finances were well regulated, and the various administrative services were placed on a basis that afterwards enabled Spain to pass through the disastrous war with the United States without the threat of a revolution.