Alfred Austin DL (30 May 1835 – 2 June 1913) was an English poet who was appointed Poet Laureate in 1896, after an interval following the death of Tennyson, when the other candidates had either caused controversy or refused the honour. It was claimed that he was being rewarded for his support for the Conservative leader Lord Salisbury in the General Election of 1895. Austin’s poems are little-remembered today, his most popular work being prose idylls celebrating nature.

Alfred Austin was born in Headingley, near Leeds, on 30 May 1835, to a Roman Catholic family. His father, Joseph Austin, was a merchant in Leeds; his mother was a sister of Joseph Locke, the civil engineer and M.P. for Honiton[citation needed]. Austin was educated at Stonyhurst College (Clitheroe, Lancashire), St Mary's College, Oscott,[1] and University of London, from which he graduated in 1853.[2] He became a barrister in 1857 but after inheriting a fortune from his uncle gave up his legal career for literature. [3][2][4]

Politically conservative, between 1866 and 1896 Austin edited National Review and wrote leading articles for The Standard.[2] He was Foreign Affairs Correspondent with the Standard, and served as a special correspondent to The Ecumenical Council of the Vatican in 1870; at the Headquarters of the King of Prussia during the Franco-Prussian War, 1870; at the Congress of Berlin, 1878 where he was granted an audience by German Chancellor Otto von Bismarck. An ardent imperialist and follower of Disraeli he became, in 1883, joint editor of the National Review with W.J. Courthope and was sole editor from 1887 until 1896. [5]

On Tennyson's death in 1892 it was felt that none of the then living poets, except Algernon Charles Swinburne or William Morris, who were outside consideration on other grounds, was of sufficient distinction to succeed to the laurel crown, and for several years no new poet-laureate was nominated. In the interval the claims of one writer and another were assessed, but eventually, in 1896, Austin was appointed to the post[2] after Morris had declined it. As a poet Austin never ranked highly in the opinions of his peers, and was often derided as being a ‘Banjo Byron’

Broadus writes that the choice of Austin for poet-laureate had much to do with Austin's friendship with Lord Salisbury, his position as an editor and leader writer, and his willingness to use his poetry to support the government.[6] For example, shortly before his appointment was announced, Austin published a sonnet entitled A Vindication of England, written in response to a series of sonnets by William Watson, published in the Westminster Gazette, that had accused Salisbury's government of betraying Armenia and abandoning its people to Turkish massacres.[7]

'At length a callous Tory chief arose,
Master of caustic jest and cynic gibe,
Looked round the Carlton Club and lightly chose
Its leading scribe.' 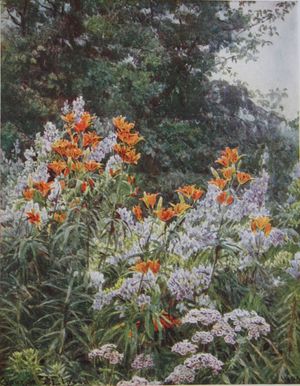 Plate from The Garden that I love

On 14 November 1865 Austin married Hester Jane Homan-Mulock, tenth child of Thomas Homan-Mulock and Frances Sophia Berry at St Marylebone Parish Church, London. In his Autobiography, Austin gives a curious account of their first meeting with her. Seeing the photograph of a young lady in an album belonging to a friend in Florence, he had asked: ‘Who is that?’ and received the reply, ‘The girl you ought to marry, if you can.’ Austin brought home a letter of introduction, the presentation of which led to his receiving at his cottage in Hertfordshire two of the Misses Mulock and their chaperon, together with their friend T.A. Trollope, brother of Anthony Trollope. At the second visit Hester became engaged to Alfred. Throughout his career as journalist and writer Austin derived constant help and support from his wife. She died suddenly on 23 September 1929 at her residence in Kensington. His nephews included the Polar Explorer Captain George F.A. Mulock DSO, RN, FRGS and British diplomat Sir Howard William Kennard KCMG, CMG, CVO (1878–1955), British Ambassador to Poland at the outbreak of the Second World War.

In 1861, after two false starts in poetry and fiction, he made his first noteworthy appearance as a writer with The Season: a Satire, which contained incisive lines, and was marked by some promise both in wit and observation. In 1870 he published a volume of criticism, The Poetry of the Period, which was conceived in the spirit of satire, and attacked Tennyson, Browning, Matthew Arnold and Swinburne in an unrestrained fashion. The book aroused some discussion at the time, but its judgments were extremely uncritical.[2]

As poet-laureate, his topical verses did not escape negative criticism; a hasty poem written in praise of the Jameson Raid in 1896 being a notable instance. The most effective characteristic of Austin's poetry, as of the best of his prose, was a genuine and intimate love of nature. His prose idylls, The Garden that I love and In Veronica's Garden, are full of a pleasant, open-air flavour. His lyrical poems are wanting in spontaneity and individuality, but many of them possess a simple, orderly charm, as of an English country lane. He had, indeed, a true love of England, sometimes not without a suspicion of insularity, but always fresh and ingenuous. A drama by him, Flodden Field, was acted at His Majesty's theatre in 1903.[2] 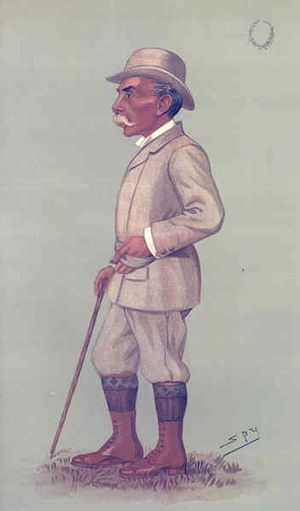 Austin was caricatured as "Sir Austed Alfrin" by L. Frank Baum in his 1906 novel John Dough and the Cherub.

He was also the subject of a Vanity Fair cartoon by Spy published on 20 February 1896.

A Poem – To England