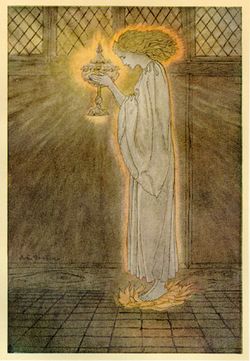 "How at the Castle of Corbin a Maiden Bare in the Sangreal and Foretold the Achievements of Galahad", Arthur Rackham's illustration to Pollard's The Romance of King Arthur and His Knights of the Round Table (1917).

Alfred William Pollard, FBA (14 August 1859 – 8 March 1944) was an English bibliographer, widely credited for bringing a higher level of scholarly rigor to the study of Shakespearean texts.

Pollard was educated at King's College School in London and St John's College at the University of Oxford. He joined the staff of the British Museum in 1883, as assistant in the department of printed books; he was promoted to assistant keeper in 1909, and keeper in 1919. In the latter year, Pollard was appointed professor of english bibliography at the University of London. He was honorary secretary of the Bibliographical Society from 1893 to 1934 and edited the society's journal The Library for thirty years (1903–34). He received the society's gold medal in 1929.[1]

Pollard wrote widely on a range of subjects in English literature throughout his career, and collaborated with various scholars in specialized studies; he edited Thomas Malory's Le Morte d'Arthur, and a collection of Fifteenth Century Poetry and Prose. With Gilbert Richard Redgrave, he edited the STC, or A short-title catalogue of books printed in England, Scotland, & Ireland and of English books printed abroad, 1475–1640 (1926).[2] He provided a bibliographical introduction to a facsimile print of the 1611 King James Bible which was produced for its three hundredth anniversary. He was a longtime friend of the poet A. E. Housman, and a close colleague of the prominent Shakespeare scholars Edmund Kerchever Chambers and R. B. McKerrow.