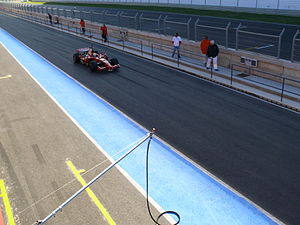 Felipe Massa at the Autódromo Internacional do Algarve 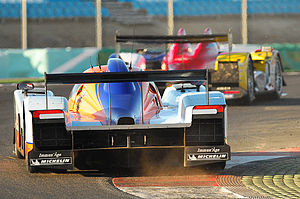 The circuit was designed by Ricardo Pina, Arquitectos. In October 2010 the teams agreed to add the Portimao Circuit to the Formula One testing roster along with Bahrain.[3]

In September 2013, the company that manages the circuit, Parkalgar Serviços, was taken over by Portugal Capital Ventures, which is a Portuguese state-owned venture capitalist, effectively placing the circuit under state management. The sale was forced by the debts accumulated by Parkalgar Serviços, believed to be approximately 160 million Euros.[4]

On April 4, 2009 Max Mosley stated that based on the quality of the circuit it could integrate the Formula One championship under the guise of the Portuguese Grand Prix, as long as a commercial agreement with the Formula One Management is achieved.[15]

It has been confirmed that one of the corners of the circuit was named after former World Supersport rider Craig Jones who was killed in a motorcycle crash at Brands Hatch in 2008.

On 2009, October 22, a tribute ceremony occurred, with the exhibition of a provisional statue, created by the Portuguese sculptress Paula Hespanha, representing Craig Jones on his motorbike after passing the finishing line. This statue will be the main part of a monument, already partially built, which also includes the architectural arrangement of the main access roundabout to the racetrack, created by Paula Hespanha and Portuguese architect Manuel Pedro Ferreira Chaves. This monument is a landscape sculpture, representing the main straight of a racing circuit, which extends up to the car park of the main grandstand. This large-scale artistic intervention serves to frame the statue but will also be useful as an access that will allow pedestrian approach to the statue.[16] The owner of Autódromo Internacional do Algarve and Parkalgar racing team, Paulo Pinheiro, declared: "it is a very special thanks to Craig Jones who will be forever immortalized in our memories. This tribute will keep alive the admiration and respect for the work of Craig in the motorcycling world ".[17] "This monument will ensure that Craig Jones will never be forgotten."[18]

The inauguration of the marble and stainless steel statue was expected to occur in 2010. If completed in 2011, this will be the only stone statue in the world representing a motorbike.[19][20]