Algernon Charles Swinburne (5 April 1837 – 10 April 1909) was an English poet, playwright, novelist, and critic. He wrote several novels and collections of poetry such as Poems and Ballads, and contributed to the famous Eleventh Edition of the Encyclopædia Britannica.

Swinburne wrote about many taboo topics, such as lesbianism, cannibalism, sado-masochism, and anti-theism. His poems have many common motifs, such as the ocean, time, and death. Several historical people are featured in his poems, such as Sappho ("Sapphics"), Anactoria ("Anactoria"), and Catullus ("To Catullus").[1]

Swinburne was born at 7 Chester Street, Grosvenor Place, London, on 5 April 1837. He was the eldest of six children born to Captain (later Admiral) Charles Henry Swinburne (1797–1877) and Lady Jane Henrietta, daughter of the 3rd Earl of Ashburnham, a wealthy Northumbrian family. He grew up at East Dene in Bonchurch on the Isle of Wight.[2] The Swinburnes also had a London home at Whitehall Gardens, Westminster.[3]

As a child, Swinburne was "nervous" and "frail," but "was also fired with nervous energy and fearlessness to the point of being reckless."[4]

Swinburne attended Eton College (1849–53), where he started writing poetry. At Eton, he won first prizes in French and Italian.[4] He attended Balliol College, Oxford (1856–60) with a brief hiatus when he was rusticated[5] from the university in 1859 for having publicly supported the attempted assassination of Napoleon III by Felice Orsini.[6] He returned in May 1860, though he never received a degree.

Swinburne spent summer holidays at Capheaton Hall in Northumberland, the house of his grandfather, Sir John Swinburne, 6th Baronet (1762–1860), who had a famous library and was president of the Literary and Philosophical Society in Newcastle upon Tyne. Swinburne considered Northumberland to be his native county, an emotion reflected in poems like the intensely patriotic "Northumberland", "Grace Darling" and others. He enjoyed riding his pony across the moors, he was a daring horseman, "through honeyed leagues of the northland border", as he called the Scottish border in his Recollections.[7] 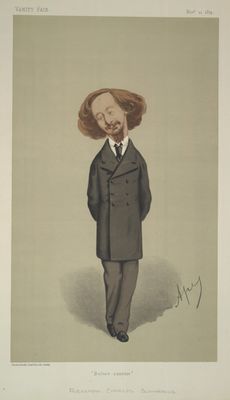 Swinburne caricatured by Carlo Pellegrini In Vanity Fair in 1874

In the period 1857–60, Swinburne became a member of Lady Trevelyan's intellectual circle at Wallington Hall.

After his grandfather's death in 1860 he stayed with William Bell Scott in Newcastle. In 1861, Swinburne visited Menton on the French Riviera, staying at the Villa Laurenti to recover from the excessive use of alcohol.[8] From Menton, Swinburne travelled to Italy, where he journeyed extensively.[8] In December 1862, Swinburne accompanied Scott and his guests, probably including Dante Gabriel Rossetti, on a trip to Tynemouth. Scott writes in his memoirs that, as they walked by the sea, Swinburne declaimed the as yet unpublished "Hymn to Proserpine" and "Laus Veneris" in his lilting intonation, while the waves "were running the whole length of the long level sands towards Cullercoats and sounding like far-off acclamations".[9]

At Oxford, Swinburne met several Pre-Raphaelites, including Dante Gabriel Rossetti. He also met William Morris. After leaving college, he lived in London and started an active writing career, where Rossetti was delighted with his "little Northumbrian friend", probably a reference to Swinburne's diminutive height—he was just five-foot-four.[10] 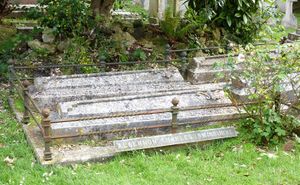 Swinburne was an alcoholic and algolagniac and highly excitable. He liked to be flogged.[11] His health suffered, and in 1879 at the age of 42, he was taken into care by his friend, Theodore Watts-Dunton, who looked after him for the rest of his life at The Pines, 11 Putney Hill, Putney.[12] Watts-Dunton took him to the lost town of Dunwich, on the Suffolk coast, on several occasions in the 1870s.[13]

In Watts-Dunton's care Swinburne lost his youthful rebelliousness and developed into a figure of social respectability.[1] It was said of Watts-Dunton that he saved the man and killed the poet. Swinburne died at the Pines[14] on 10 April 1909, at the age of 72, and was buried at St. Boniface Church, Bonchurch on the Isle of Wight.[15]

Swinburne is considered a poet of the decadent school,[16] although he perhaps professed to more vice than he actually indulged in to advertise his deviance – he spread a rumour that he had had sex with, then eaten, a monkey;[11] Oscar Wilde stated that Swinburne was "a braggart in matters of vice, who had done everything he could to convince his fellow citizens of his homosexuality and bestiality without being in the slightest degree a homosexual or a bestialiser."[17] Common gossip of the time reported that he had a deep crush on the explorer Sir Richard Francis Burton despite the fact that Swinburne hated travel.[18]

Many critics consider his mastery of vocabulary, rhyme and metre impressive,[19] although he has also been criticised for his florid style and word choices that only fit the rhyme scheme rather than contributing to the meaning of the piece.[20] He is the virtual star of the third volume of George Saintsbury's famous History of English Prosody, and A.E. Housman, a more measured and somewhat hostile critic, had great praise for his rhyming ability:

[Swinburne] possessed an altogether unexampled command of rhyme, the chief enrichment of modern verse. The English language is comparatively poor in rhymes, and most English poets, when they have to rhyme more than two or three words together, betray their embarrassment. They betray it, for instance, when they write sonnets after the strict Petrarchian rule: the poetical inferiority of most English sonnets, if compared with what their own authors have achieved in other forms of verse, is largely though not entirely the result of this difficulty...To Swinburne the sonnet was child’s play: the task of providing four rhymes was not hard enough, and he wrote long poems in which each stanza required eight or ten rhymes, and wrote them so that he never seemed to be saying anything for the rhyme’s sake.[21] 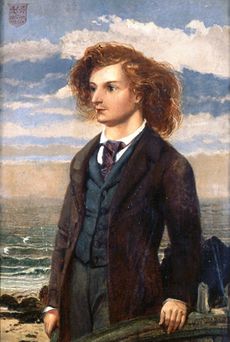 Swinburne's work was once popular among undergraduates at Oxford and Cambridge, though today it has gone out of fashion. This is at least somewhat contextual, as it tends to mirror the popular and academic consensus regarding his work, although his Poems and Ballads, First Series and his Atalanta in Calydon never have been out of critical favour. Atalanta in Calydon in particular has been lauded as one of his best early works, written in 1865, before the passionate excesses of later works earned him a sordid reputation for blasphemy and depravity among contemporary critics.[22]

T.S. Eliot read Swinburne's essays on the Shakespearean and Jonsonian dramatists in The Contemporaries of Shakespeare and The Age of Shakespeare and Swinburne's books on Shakespeare and Jonson. Writing on Swinburne in The Sacred Wood: Essays on Poetry and Criticism, Eliot wrote Swinburne had mastered his material, and "he is more reliable to them than Hazlitt, Coleridge, or Lamb: and his perception of relative values is almost always correct". However, Eliot judged Swinburne did not master it to the extent of being able to take liberties with it, which is everything.[23] Furthermore, Eliot disliked Swinburne's prose, about which he wrote "the tumultuous outcry of adjectives, the headstrong rush of undisciplined sentences, are the index to the impatience and perhaps laziness of a disorderly mind."[24]

In France, Swinburne was highly praised by Stéphane Mallarmé, and was invited to contribute to a book in honour of the poet Théophile Gautier, Le tombeau de Théophile Gautier (Wikisource): he answered by six poems in French, English, Latin and Greek.

He was considered by Prime Minister William Ewart Gladstone in 1892 for the role of poet laureate. He told Queen Victoria:

I fear he is absolutely impossible. And I must own to have been astounded at the terms in which The Times (17th) described his early outrages. It is a sad pity : I have always been deeply impressed by his genius.[25][26]

H.P. Lovecraft considered Swinburne "the only real poet in either England or America after the death of Mr. Edgar Allan Poe."[28] 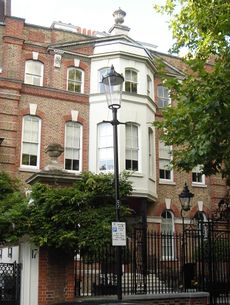 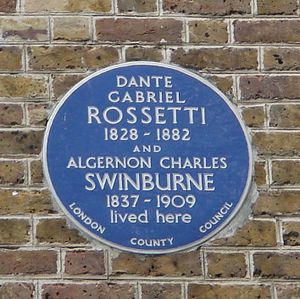 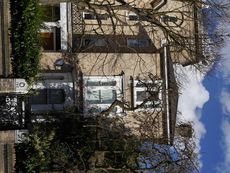 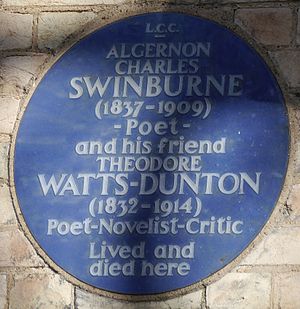 Blue plaque at The Pines, Putney

Poems and Ballads caused a sensation when it was first published, especially the poems written in homage of Sappho of Lesbos such as "Anactoria" and "Sapphics": Moxon and Co. transferred its publication rights to John Camden Hotten.[29] Other poems in this volume such as "The Leper," "Laus Veneris," and "St Dorothy" evoke a Victorian fascination with the Middle Ages, and are explicitly mediaeval in style, tone and construction. Also featured in this volume are "Hymn to Proserpine", "The Triumph of Time" and "Dolores (Notre-Dame des Sept Douleurs)".

Swinburne devised the poetic form called the roundel, a variation of the French Rondeau form, and some were included in A Century of Roundels dedicated to Christina Rossetti. Swinburne wrote to Edward Burne-Jones in 1883: "I have got a tiny new book of songs or songlets, in one form and all manner of metres ... just coming out, of which Miss Rossetti has accepted the dedication. I hope you and Georgie [his wife Georgiana, one of the MacDonald sisters] will find something to like among a hundred poems of nine lines each, twenty-four of which are about babies or small children". Opinions of these poems vary between those who find them captivating and brilliant, to those who find them merely clever and contrived. One of them, A Baby's Death, was set to music by the English composer Sir Edward Elgar as the song "Roundel: The little eyes that never knew Light". English composer Mary Augusta Wakefield set Swinburne's work May Time in Midwinter to music as well.

Swinburne was influenced by the work of William Shakespeare, Percy Bysshe Shelley, Catullus, William Morris, Dante Gabriel Rossetti, Robert Browning, Alfred Lord Tennyson, and Victor Hugo.[30] Swinburne was popular in England during his life, but his influence has greatly decreased since his death.

After the first Poems and Ballads, Swinburne's later poetry increasingly was devoted to celebrations of republicanism and revolutionary causes, particularly in the volume Songs before Sunrise.[1] "A Song of Italy" is dedicated to Mazzini; "Ode on the Proclamation of the French Republic" is dedicated to Victor Hugo; and "Dirae" is a sonnet sequence of vituperative attacks against those Swinburne believed to be enemies of liberty. Erechtheus is the culmination of Swinburne's republican verse.[1]

He did not stop writing love poetry entirely, including his great epic-length poem Tristram of Lyonesse, but its content is much less shocking than those of his earlier love poetry. His versification, and especially his rhyming technique, remain in top form to the end.[1]

^† Although formally tragedies, Atalanta in Calydon and Erechtheus are traditionally included with "poetry".