Alice Cogswell (August 31, 1805 – December 30, 1830) was the inspiration to Thomas Hopkins Gallaudet for the creation of the now American School for the Deaf in Hartford, Connecticut.

At the age of two, she became ill with "spotted fever" (cerebral-spinal meningitis). This illness took her hearing and later she lost her speech as well. At the time, deafness was viewed as equivalent to a mental illness, and it was believed that the deaf could not be taught. Gallaudet moved into the house next door to hers when she was nine years old. He soon noticed that she wasn't interacting with the other children, and when he asked why, he was informed that she was deaf. Intrigued, he decided to teach her to communicate through pictures and writing letters in the dirt.[1] He and Alice's father, Dr. Mason Cogswell, decided that a formal school would be best for her, but no such school existed in the United States. Gallaudet went to Europe for 15 months, bringing Laurent Clerc back with him upon his return. During the time of his absence, Alice attended a hearing school and somewhat furthered her education, though the situation was not ideal. She was very lively, and enjoyed reading, sewing, and dancing. She was reportedly very good at mimicking others, and was fascinated by the concept of music.[2]

Alice Cogswell and six other deaf students entered the school that would become the American School for the Deaf in April 1817.

Alice Cogswell is known today as a remarkable figure in the history of deaf culture, representing an extraordinary breakthrough in deaf education. She proved to the world that not only are the deaf capable of being taught, they are also capable of the same level of intelligence that the hearing are. Alice stands as a perfect example of I. King Jordan's famous quote, "Deaf people can do anything hearing people can do, except hear." 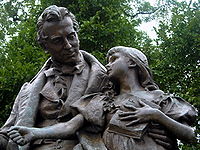