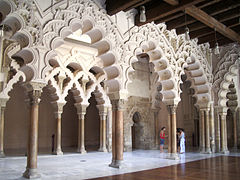 The Aljafería Palace (Spanish: Palacio de la Aljafería; Arabic: قصر الجعفرية‎‎, tr. Qasr al-Jaʿfariya) is a fortified medieval Islamic palace built during the second half of the 11th century in the Moorish taifa of Zaragoza of Al-Andalus, present day Zaragoza, Spain. It was the residence of the Banu Hud dynasty during the era of Abu Jaffar Al-Muqtadir after abolishing Banu Tujibi of Kindah dynasty. The palace reflects the splendor attained by the kingdom of the taifa of Zaragoza at the height of its grandeur. The palace currently contains the Cortes (regional parliament) of the autonomous community of Aragon.

The structure holds unique importance in that it is the only conserved testimony of a large building of Spanish Islamic architecture of the era of the Taifas (independent kingdoms).

After the capture of Zaragoza in 1118 by Alfonso I of Aragon, the Aljafería became the residence of the Christian kings of the Kingdom of Aragon and as such was converted into the focal point for spread of the Mudéjar Architecture of Aragon. It was the birthplace of Saint Elizabeth of Portugal in the year 1271. It was used as the royal residence by Peter IV of Aragon and subsequently, on the principal building site, a renovation was carried out that converted these chambers into the palace of the Catholic Monarchs in 1492. In 1593, the structure experienced another renovation that converted it into a military base, first according to Renaissance designs (which today can be observed in its moat and gardens) and later as military quarters. The building suffered continuous alterations and considerable imperfections, above all with the Siege of Zaragoza during the Peninsular War until it was finally restored in the second half of the 20th century and currently it houses the Cortes or autonomous community legislative assembly of Aragon.

In the original construction, extra ramparts were made in the open field surrounding the Aljafería. With urban expansion over the years, the building has remained inside of the city. Yet the city of Zaragoza has not been able to honour the landscaped surroundings of the Aljafería. A freeway passes only a few meters away. 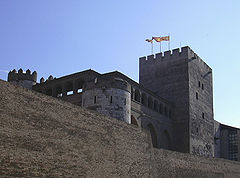 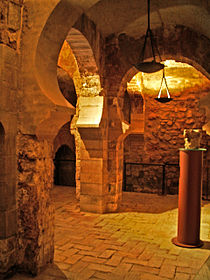 Ground floor in the Troubadour Tower.

The oldest construction of the Aljafería is called Troubadour Tower. The tower received this name from Antonio Garcia Gutierrez’s 1836 romantic drama The Troubadour. The drama was converted into a libretto for Giuseppe Verdi’s opera Il trovatore in 1853.

The tower is a defensive structure, with a quadrangular base and five levels which date back to the end of the 9th century AD, in the period governed by the first Banu Tujibi, Muhammad Alanqur, who was named after Muhammad I of Córdoba, independent Emir of Cordoba. According to Cabañero Subiza (1998) the Tower was built in the second half of the 10th century.[1] In its lower part, the tower contains vestiges of the beginning of the heavy walls of alabaster ashlar bond masonry, and continues upwards with plank lining of simple plaster and lime concrete, which is a thinner substance for reaching greater heights. The exterior does not reflect the division of the five internal floors and appears as an enormous prism, broken by narrow embrasures. Access to the interior was gained through a small door at such height that it was only possible to enter by means of a portable ladder. Its initial function was, by all indications, military.

The first level conserves the building structure of the 9th century and shelters two separated naves and six sections, which are separated by means of two cruciform pillars and divided by lowered horseshoe arcs. In spite of its simplicity, they form a balanced space and could be used as baths.

The second floor repeats the same spatial scheme as the previous floor, and the remains of Muslim brick-work from the 11th century can be seen in the brick façades, which indicates that the second floor was possibly reconstructed at the same time as the palace during the epoch of Al-Muqtadir.