From Infogalactic: the planetary knowledge core
Jump to: navigation, search
For other uses, see Alkmaar (disambiguation).

listen) is a municipality and a city in the Netherlands, in the province of North Holland. Alkmaar is well known for its traditional cheese market. For tourists, it is a popular cultural destination.

The earliest mention of the name Alkmaar is in a 10th-century document. As the village grew into a town, it was granted city rights in 1254. The oldest part of Alkmaar lies on an ancient sand bank that afforded some protection from inundation during medieval times. Even so, it is only a couple of metres above the surrounding region, which consists of some of the oldest polders in existence.

In 1573 the city underwent a siege by Spanish forces under the leadership of Don Fadrique, son of the Duke of Alva. The citizens sent urgent messages for help to the Prince of Orange; he responded by promising to open the floodgates of the dykes and flood the region if the need arose, which despite the protestations of the peasantry, fearful for their harvest, he proceeded to do. Some of his dispatches fell into the hands of Don Fadrique, and, with the waters beginning to rise, the Spaniards raised the siege and fled. It was a turning point in the Eighty Years War and gave rise to the expression Bij Alkmaar begint de victorie ("Victory begins at Alkmaar"). The event is still celebrated every year in Alkmaar on 8 October, the day the siege ended.

In 1799, during the French revolutionary wars, an Anglo-Russian expeditionary force captured the city but was ultimately defeated in the Battle of Castricum. The French victory was commemorated on the Arc de Triomphe in Paris as "Alkmaer".

In the second half of the 20th century, Alkmaar expanded quickly with development of new neighbourhoods. On 1 October 1972, the town of Oudorp and the southern portions of Koedijk and Sint Pancras were added to the municipality of Alkmaar.[5] 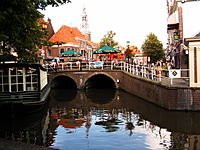 The municipality of Alkmaar consists of the following cities, towns, villages and/or districts: Alkmaar, Koedijk (partly), Overdie, Oudorp and Omval.

These once separate villages are now all linked together by the suburban sprawl of buildings that arose between the late 1970s and early 1990s. During this time, the population of Alkmaar almost doubled.

On 1 January 2015 the municipalities of Graft-De Rijp and Schermer were merged into Alkmaar.

The municipal council of Alkmaar consists of 37 seats, which are divided as follows: 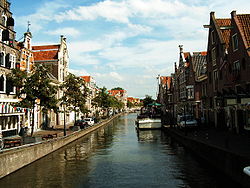 The A9 motorway runs from Amsterdam to Alkmaar, then continues on to Den Helder as the N9.

The waterway Noordhollandsch Kanaal, which opened in 1824, runs through Alkmaar. 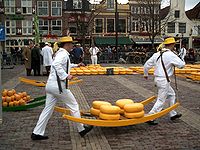 Alkmaar has many medieval buildings that are still intact, most notably the tall tower of the Grote of Sint-Laurenskerk, where many people from Alkmaar hold their wedding ceremony. The other main attraction, especially in the summer months, is Alkmaar's cheese market at the Waagplein, one of the country's most popular tourist attractions. The cheese market traditionally takes place on the first Friday in April and the last market of the season is the first Friday in September. Every Friday morning (10.00–12.30 a.m.) the Waagplein is the backdrop for this traditional cheese market. After the old-fashioned way of the hand clap, traders and carriers will weigh the cheeses. It is one of only four traditional Dutch cheese markets still in existence. The traditional fare of this cheese market is those cheeses made in the local area, as opposed to the well-known brands of Dutch cheeses, i.e. Edam cheese and Gouda cheese. It is not actually possible to buy cheese at the market itself, which is really only a demonstration of how this merchants' market operated in times gone by. However, the demonstration, which takes place in front of the medieval weighing house, is surrounded by many specialized stalls where it is possible to buy all kinds of cheese (and non-cheese) related products. The Waag is also home to the local tourist office and a cheese museum. Alkmaar has 399 registered rijksmonuments, of which most are situated along the city's old canals.[6]

Alkmaar has two large theatres and a big cinema (which was originally two cinemas). A red light district is situated at the Achterdam, and Alkmaar has a nightlife scene as well which takes place in the pubs in front of the cheesemarket.

Alkmaar is home to the professional football team AZ (Alkmaar Zaanstreek). In 2006, the club moved to a new 17,000 capacity stadium, the DSB Stadion, now named the AFAS Stadion. In 2008–2009, AZ won the Eredivisie, the Dutch football league. It was the second league title for the club after the Eredivisie in 1980/81 with only one league defeat.

The city also has a velodrome where the Dutch national track cycling championships are held every year. 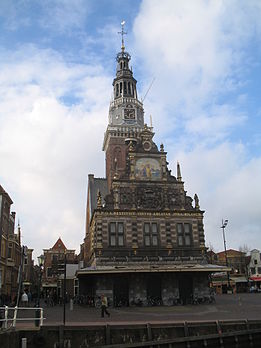 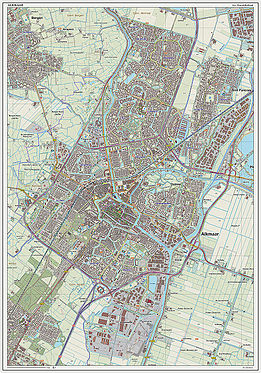 Alkmaar is twinned with: