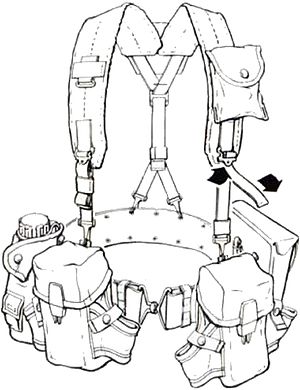 Based principally on the conclusions and recommendations of A Study To Reduce The Load Of The Infantry Combat Soldier, 1962[2] and A Study To Conserve Energy Of The Combat Infantryman, 1964,[3] the army established a Quantitative Material Requirement[4] (QMR) in 1965 calling for the development of LINCLOE.

Although the development of the LINCLOE load-carrying equipment did not officially start until after the United States Army Materiel Command Technical Committee (AMCTC) approved the project 27 April 1966, development of lightweight load-carrying equipment really began in 1961 with the development of the Lightweight Rucksack (FSN 8465-782-3248) made of nylon fabrics and an aluminum frame which weighed 3 pounds (1.4 kg) as compared to the 7.5 pounds (3.4 kg) cotton canvas duck and steel item which it replaced.[5]

During 1968, the LINCLOE program continued to refine the lightweight load-carrying system. A prototype system was designed utilizing some of the existing MLCE components such as the water canteen cover, small arms ammunition cases, and field first aid dressing case. The individual equipment belt buckle was replaced with a plastic version of the Davis quick-release buckle and a new Vest, Combat was developed to replace the individual equipment belt suspenders. Teams developed both a small and large field pack utilizing the detachable field pack frame concept scrapped in 1967.

These prototype items were presented at a Design Characteristics Review And Prototype System Review held at Natick Laboratories 26 March 1968.[1] It was recommended that an Engineering/Service Test [ET/ST] be carried out on this new load-carrying system design with the understanding that any design changes required be accomplished prior to testing and without another design review.

The NCO Board reviewed the LINCLOE LCE under test as well as the MLCE being provided to troops in Vietnam and arrived at characteristics which they considered desirable. As testing of the LINCLOE LCE continued a number of failures began to occur mostly to do with closure devices; plastic snap fasteners were still being utilized like those initially utilized on MLCE items. By December 1969, all testing stopped for re-evaluation of the components of the new load-carrying system.

In January 1970, the Infantry Board completed the evaluation of the load-carrying equipment, and on 17 March 1970, they held a conference at Fort Benning to review the results of the evaluation. They discussed each item evaluated, and agreed as to the acceptable changes to each load-carrying equipment item. They also agreed that the test of the first-generation LINCLOE LCE should be stopped and new items be designed to reflect the characteristics developed as a result of the evaluations by the NCO Board and Infantry Team.

In a letter to United States Army Materiel Command dated 15 April 1970, United States Army Combat Developments Command described the next generation of LINCLOE LCE for service testing based on the agreements of the 17 March 1970 meeting.[8] The following items were recommended when modified as indicated:

Also proposed in the letter were improved versions of the small and large field pack and field pack frame.

During April and June 1970, teams fabricated a prototype system of load-carrying equipment as described in the 15 April 1970 letter. They presented this set of load-carrying equipment to the NCO Board and Infantry Team for review at Fort Benning on 18–19 June 1970. On 29 July 1970, representatives from the United States Army Combat Developments Command and the LINCLOE LCE Project Officer met at Natick Laboratories and drafted a revision of the LINCLOE LCE Quantitative Material Requirement as it pertained to load-carrying equipment including the characteristics for each individual item. This was based primarily on the outcome of the 17 March 1970 meeting with one major exception. The LINCLOE LCE Project Officer a third field pack to the system. This was the medium field pack with a bag made from the nylon tropical rucksack, modified to meet the NCO Board requirements for a small field pack by adapting it to be worn on the back with or without a field pack frame.

In August 1971, the test sets were sent to Fort Benning, Fort Greely, Fort Devens, and, as requested, to the Marine Corps at Quantico. Pre-test inspections uncovered a number of deficiencies with the field packs which were returned to Natick Laboratories for modification. The modified items went back to the test sites in November 1971 and the service test began.

By March 1972, so many deficiencies and shortcomings had developed in the load-carrying equipment that the United States Army Test And Evaluation Command requested that the test at Fort Benning be suspended until test items could be repaired or replaced. Officials held a meeting at Fort Benning on 6 April 1972 to discuss the failures.[9] In their discussions, they agreed that Natick Laboratories would take action to correct the problems so the tests could resume 9 June 1972.

Most deficiencies were found in field packs, users asked that the inner flaps on the small arms ammunition cases be removed as they impeded the rapid removal of cartridge magazines. Developers replaced these with simple strips of nylon fabric to divide the cartridge magazines. At some point during 1971 the Marine Corps found that the small arms ammunition case with the divider flaps was acceptable and initiated acceptance procedures. On 31 January 1972, the army issued military specification MIL-C-28981(MC) and these small arms ammunition cases were type classified and assigned the Federal Stock Number 8465-464-2084. The Defense Support Agency (DSA) issued contracts for the item for fiscal year 1973.

Natick Laboratories completed the modifications of the test items and military aircraft transported them to Fort Benning 1 June 1972, but testing did not resume until 3 July 1972. Testing finished 18 August 1972 and the final report was received on 24 November 1972.[10] As a result of the test, the Infantry Board recommended that no further development effort be expended on the load-carrying equipment as a system. On 31 October 1972, representatives from Natick Laboratories visited Fort Benning to discuss the problems which appeared during the testing of each item and to arrive at a decision whether to continue development of each item.[11] Prior to these final meetings the LINCLOE LCE components had been type classified and assigned Federal Stock Numbers as follows:

After the final meetings, the group proposed the following changes prior to manufacture:

The formal Development Acceptance (DEVA) review on the LINCLOE LCE occurred at Natick Laboratories 17 January 1973.[13] The panel members agreed, by consensus, that the components be type classified as Standard A. After acceptance, the individual equipment system was given the designation M-1972 Lightweight Load-Carrying Equipment (LLCE). The Defense Support Agency (DSA) began issuing contracts for the components of the new individual equipment system for fiscal year 1974, which began 1 July 1973. After the DSA issued the initial contracts, the individual equipment system was re-designated All-Purpose Lightweight Individual Carrying Equipment (ALICE) and the use of year-model designations officially ceased.[14]

The ALICE system has been phased out of all Active and Reserve Component (USAR and Army National Guard) units in the Army. Basic and Advanced Individual Training units, to include OCS, ROTC, and USMA, use the current MOLLE equipment in the digital Universal Camouflage Pattern (UCP). ALICE was succeeded by Generation I MOLLE equipment. MOLLE I was then replaced by MOLLE II which, unlike MOLLE I, is strictly for the Army's Army Combat Uniform (ACU) instead of the Battle Dress Uniform (BDU) and Desert Camouflage Uniform (DCU).

The Navy and USAF use ALICE gear for ground personnel as well, although the USAF is phasing out ALICE in favor of MOLLE.

The Marine Corps still issues the medium ALICE pack for some radio operators. Both it and the large variant can still be found with NROTC units (who train Marine officers in addition to Navy officers). Active-duty training units (Recruit Training, School of Infantry, Officer Candidates School, The Basic School) and deployable units have switched over to the new Family of Improved Load Bearing Equipment (USMC Pack) or the slightly older Improved Load Bearing Equipment (ILBE) system.

Iranian Military and Law Enforcement still make heavy use of ALICE, MLC and LCE gear, but they are switching to MOLLE equipment (specifically IRGC and Army special forces) because of being more modular and to IIFS for being more lightweight.

Cover, Water Canteen - The water canteen cover is fabricated of nylon cloth and webbing and acrylic pile liner material. The two-flap closure is secured by means of metal snap fasteners. There is a small pocket on the front of the cover for carrying water purification tablets. The lid of this small pocket is secured by means of hook and pile fastener tape. The cover attaches to the individual equipment belt by means of two belt-strap keepers with interlocking slides. The water canteen cover is designed to accommodate the Canteen, Water (NSN 8465-00-889-3477). In 1975, the LC-1 designation for the water canteen cover is changed to LC-2 due to some minor design changes. The National Stock Number remains the same.

Frame, Field Pack - The field pack frame is used as a mount for either the medium field pack or the large field pack. The frame, when requisitioned, comes with all straps. The frame is of aluminum construction.

Shelf, Cargo Support - The cargo support shelf is used to support bulky loads such as water, gasoline, and ammunition cans, field rations, and radios. The shelf is of aluminum construction.

In 1977 the following existence load equipment items are introduced as replacements after modifications due to defects in the original equipment's design: