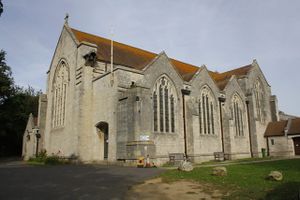 All Saints Church is a 20th-century Anglican church, located in Easton village, on the Isle of Portland, Dorset. It was consecrated in 1917 and has been a Listed Grade II building since September 1978.[1] The church succeeded to the rights, privileges, registers and silver of the St George's Church.[2] It has been described as the finest ecclesiastical building on Portland – though somewhat hidden at its position. The church remains active to date, as part of the Portland Parish - a host of three churches; St. John's Church (St John the Baptist), All Saints Church and the Avalanche Memorial Church (St Andrew's Church).[3]

By the 20th-century, the bishop of the time expressed the wish for a new church to be constructed on Portland, to succeed St George's as the parish church.[4] The church was known for being uncomfortable and draughty, while the original freehold selling of the box pews proved to be a burden over the life of the church. This was because the pew owners had become untraceable as they had been split between hundreds of members of Portland families over time.[5] These issues led to plans being put forward for a new parish church, and these were approved in 1913.[6]

By March 1914, enough funding had been raised to commence the building of the church. The chosen site for the church was within the Easton area known as Straits.[7] The building of the church commenced in 1914, and was completed and consecrated in 1917.[8] It had been designed by architect George Crickmay, and built by Crickmay and Sons,[1] with total costs amounting to £13,000.[9] The original plans had intended for a tower to be added to the church, however this was never built.[1]