From Infogalactic: the planetary knowledge core
(Redirected from All Souls College)
Jump to: navigation, search

Unique to All Souls, all of its members automatically become Fellows (i.e., full members of the College's governing body). It has no undergraduate members, but each year recent graduates of the university and graduates of other universities now registered as postgraduate students at Oxford are eligible to apply for Examination Fellowships through a competitive examination (once described as "the hardest exam in the world") and, for the several shortlisted after the examinations, an interview.[3][4][5]

All Souls is one of the wealthiest colleges in Oxford, with a financial endowment of £286.4m (2014).[6] However, since the College's principal source of revenue is its endowment, it only ranks nineteenth among Oxford colleges with respect to total income.[7]

The college is located on the north side of the High Street adjoining Radcliffe Square to the west. To the east is The Queen's College with Hertford College to the North.

The current Warden (head of the College) is Sir John Vickers, a graduate of Oriel College, Oxford.

The College was founded by Henry VI of England and Henry Chichele (fellow of New College and Archbishop of Canterbury), in 1438. The Statutes provided for the Warden and forty fellows – all to take Holy Orders; twenty-four to study arts, philosophy and theology; and sixteen to study civil or canon law. The College's Codrington Library, completed in 1751, was completed through the bequest of Christopher Codrington in 1710, a slave owner from Barbados, who attended Oxford and later became colonial governor of the Leeward Islands. Today the College is primarily a graduate research institution.

The College now has no undergraduate members. All Souls did once have them, especially in the early 17th century on the instigation of Robert Hovenden (Warden of the college from 1571 to 1614), in order to provide the fellows with servientes (household servants). The admission of undergraduates for this purpose was abandoned in the 19th century, although four Bible Clerks remained on the foundation until 1924.[8] 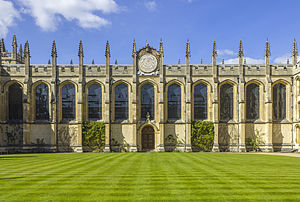 The All Souls Library (formally known as the Codrington Library) was founded through a bequest from Christopher Codrington (1668–1710), a Fellow of the College. Christopher Codrington bequeathed books worth £6,000, in addition to £10,000 in currency. This bequest allowed the library to be built and endowed. Christopher Codrington was born in Barbados, and amassed his fortune from plantation slavery.[9] The library was completed in 1751, and has been in continuous use since then. The modern library comprises some 185,000 items, about a third of which were published before 1800. The collections are particularly strong in Law and History (especially Military History).[10]

Built between 1438 and 1442, the chapel remained largely unchanged until the Commonwealth. Oxford, having been a largely Royalist stronghold, suffered under the Puritans' wrath. The 42 misericords date from the Chapel's building, and show a resemblance to the misericords at Higham Ferrers. Both may have been carved by Richard Tyllock.

Christopher Wren was a Fellow from 1653, and in 1658 produced a sundial for the College. This was originally placed on the South wall of the Chapel, until it was moved to the quadrangle (above the central entrance to the Codrington Library) in 1877. During the 1660s a screen was installed in the Chapel, which was based on a design by Wren. However, this screen needed to be rebuilt by 1713. By the mid-19th century the Chapel was in great need of renovation, and so the current structure is heavily influenced by Victorian design ideals.

In the three years following the award of their bachelor's degrees, students graduating from Oxford and current Oxford postgraduate students having graduated elsewhere[11] are eligible to apply for Examination Fellowships (sometimes informally referred to as "Prize Fellowships") of seven years each. Each year several dozen typically do so.[4][12] Two examination fellows are usually elected each year, although the college has awarded a single place in previous years, and made no award on rare occasions.[13]

The competition, offered since 1878[14] and open to women since 1979,[4] takes place over two days in late September, with two examinations of three hours each per day.

Two are on a single subject of the candidate's choice, the options comprising Classics, English Literature, Economics, History, Law, Philosophy, and Politics. Candidates who choose Classics as their subject have an additional translation examination on a third day.[11] Two are on general subjects. For each general examination candidates choose from a list of three questions.[15] Past questions have included:

Four to six[12] finalists are invited to a viva voce[13] or oral examination.[11] Previously, viva candidates were then invited to dinner with about 75 members of the college. The dinner did not form part of the assessment, but was intended as a reward for those candidates who had reached the latter stages of the selection process. However, the dinner has been discontinued as the college felt candidates worried too often that it was part of the assessment process.

About a dozen Examination Fellows are at the college at any one time.[4] There are no compulsory teaching or research requirements; they can study anything for free at Oxford with room and board.[11] As "Londoners" they can pursue approved non-academic careers[4][11] if desired, with a reduced stipend, as long as they pursue academia on a part-time basis and attend weekend dinners at the college during their first academic year.[12] As of 2011[update] each Examination Fellow receives a stipend of £14,842[17] annually for the first two years; the stipend then varies depending on whether the Fellow pursues an academic career.[11]

Subjects of the "Essay"

Other categories of fellowship include:

There are also a number of Professorial Fellows who hold their fellowships by virtue of their University post.

Fellows of the College include the Chichele Professorships, which are statutory professorships at the University of Oxford named in honour of Henry Chichele (also spelt Chicheley or Checheley, although the spelling of the academic position is consistently "Chichele"), an Archbishop of Canterbury and founder of All Souls College, Oxford. Fellowship of that College has accompanied the award of a Chichele chair since 1870.

Following the work of the 1850 Commission to examine the organization of the University, All Souls College suppressed ten of its fellowships to create the funds to establish the first two Chichele professorships: The Chichele Professor of International Law and Diplomacy, established in 1859 and first held by Mountague Bernard, and the Chichele Professor of Modern History, first held by Montagu Burrows.

There are currently Chichele Professorships in five different subjects:

The Chichele Lectures are a prestigious series of lectures formally established in 1912 and sponsored by All Souls College. The lectures were initially restricted to foreign history, but have since been expanded to include law, political theory, economic theory, as well as foreign and British history. Traditionally the lectures were delivered by a single speaker, but it is now common for several speakers to deliver lectures on a common theme.[28]

Every hundred years, and generally on 14 January, there is a commemorative feast after which the fellows parade around the College with flaming torches, singing the Mallard Song and led by a "Lord Mallard" who is carried in a chair, in search of a legendary mallard that supposedly flew out of the foundations of the college when it was being built.[29] During the hunt the Lord Mallard is preceded by a man bearing a pole to which a mallard is tied – originally a live bird, latterly either dead (1901) or carved from wood (2001). The last mallard ceremony was in 2001[30] and the next will be held in 2101. The precise origin of the custom is not known but it dates from at least 1632.[31]

Past and current fellows of the College have included: