From Infogalactic: the planetary knowledge core
Jump to: navigation, search
This article is about the former Pennsylvania city. For other uses, see Allegheny, Pennsylvania (disambiguation). 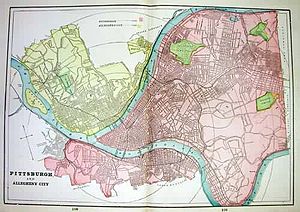 1898 map with Allegheny in yellow, Pittsburgh in red, and parks in green

The City of Allegheny was laid out in 1788 according to a plan by John Redick. The lots were sold in Philadelphia by the State government or given as payment to Revolutionary War veterans. It was incorporated as a borough in 1828 and as a city in 1840. Prior to the 1850s, most of the area was still largely farmland, but was subdivided into residential lots, first for the growing German population and later for the Croats. It was commonly referred to as "Deutschtown".

The absorption of Allegheny by Pittsburgh began in 1906, was effected in 1907, authorized by the U.S. Supreme Court in a landmark decision Hunter v. City of Pittsburgh[1] in 1907, and finally approved by the United States Government in 1911. The annexation was controversial at the time, as an overwhelming majority of Allegheny City residents were opposed to the merger. Previous Pennsylvania law had directed that a majority of the voters in each merging municipality had to approve the agreement. In 1906, a new law was quietly passed by the State Assembly, that allowed a majority of the total voters in both combined municipalities to approve the merger. The annexation was rejected by the residents of Allegheny City by a 2:1 margin, but was approved by much more populous Pittsburgh and the annexation bill passed into law. Allegheny City residents tried unsuccessfully for years to have the annexation overturned in court.

When the two cities were joined, both of the old ward systems were discarded. They were replaced by a new ward system made of 27 wards. In the new ward system, Allegheny became wards 21 to 27, thus its past location is easily determinable by viewing a map that depicts the ward system.

A massive urban redevelopment project in the 1960s demolished the core of historic Allegheny City, leaving only the Commons of Allegheny Center and its surrounding neighborhoods to evoke the area's past. The Carnegie Library, the Old Post Office Building, and the Buhl Planetarium buildings were not demolished. Major portions of the neighborhoods of Allegheny West, Manchester, Central Northside, California-Kirkbride (Old Allegheny Rows), and East Allegheny are listed on the National Register of Historic Places, including the Mexican War Streets in Central Northside.

Allegheny was an industrial city and had numerous commercial areas, churches, and social organizations, packing houses, tanneries, soap factories and glue factories that provided opportunities for employment to the primarily German immigrants who settled there. The H.J. Heinz Company built its factory in Allegheny City, close to the Chestnut Street bridge, which has been replaced by the 16th Street Bridge. Heyl & Patterson Inc., a manufacturer of railcar dumpers and ship unloaders, also established a factory in Allegheny City. The surviving structures are now occupied by a furniture warehouse and a bus garage.

By the middle of the nineteenth century, the "Made in Allegheny" label could be found not only on basic iron but on rope, plows, cotton cloth, wool, food, paper, paint, steam engines, wagons and carts, meat, soap, candles, lumber, linseed oil, furniture and a host of other diversified products.[2]

The Priory
The Priory is really two historic landmarks - the 1852 St. Mary's German Catholic Church and the adjacent 1888 home for Bavarian Benedictine priests and brothers. Once a largely German parish, the church later merged with nearby Italian and Polish congregations. The church and rectory have since closed, and currently house a banquet hall and a bed-and-breakfast.

Penn Brewery
Although Penn Brewery only began in 1987, it is housed in the old Eberhardt & Ober Brewery (1882-1906) buildings. Penn Brewery makes the award-winning Penn Pilsner and a number of other specialty beers. The "tied house" (brewery owned restaurant) features a full German menu and live music.

Saint Nicholas Church
Saint Nicholas Croatian Catholic Church, nestled in the hillside near the Allegheny River, was the first Croatian Church in America. The structure was razed in January, 2013.

Ridge Avenue Neighborhood
Ridge Avenue, in its heyday between 1890 and 1910, was known as "Millionaire's Row". But after only 20 years, things started turning downhill for Ridge Avenue and its environs. In fact, the entire North Side community began to fray after having been annexed by Pittsburgh in 1907.

The Mexican War Streets were laid out in 1848 by General William Robinson, Jr. who later became mayor of the city of Allegheny. Just returned from service in the Mexican War, he subdivided his land and named the new streets after the battles and generals (Buena Vista Street, Filson Way, Monterey Street, Palo Alto Street, Resaca Place, Sherman Avenue, Taylor Avenue) of that war.[3]

Felix Brunot Mansion
Historians[4] say the Felix Brunot mansion on Stockton Avenue was once a station on the underground railway, where fugitive slaves from the South stopped for food and shelter.