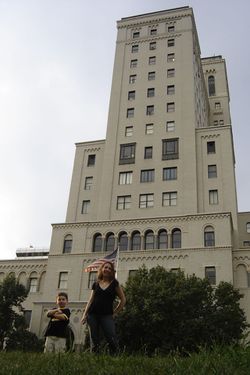 The Allegheny Health Network (AHN), formerly the West Penn Allegheny Health System (WPAHS), is an academic medical center located in the Pittsburgh metropolitan area. The second-largest provider of healthcare in its region, AHN was formed by the merger of the Western Pennsylvania Hospital (West Penn), founded in 1848 as Pittsburgh's first chartered public hospital, and Allegheny General Hospital (AGH), which was founded in 1886. AHN is made up of these two tertiary hospitals, both located in Pittsburgh, as well as three community hospitals: Alle-Kiski Medical Center in Harrison Township, Canonsburg General Hospital in Canonsburg, and The Western Pennsylvania Hospital – Forbes Regional Campus in Monroeville. The system also includes Forbes Hospice, now located in West Penn Hospital, which opened in 1979 as Pittsburgh’s first end-of-life and palliative care program,[1] and West Penn Allegheny Health System’s STAR Center (Simulation, Training and Academic Research Center), which provides simulation training for medical, nursing, and other health care professionals.[2] AHN adopted its current name in 2013 after becoming a wholly owned subsidiary of Highmark.[3]

AHN employs approximately 13,000 people with a medical staff of 2,726. The system offers 46 graduate medical programs, operates two nursing schools, and serves as a clinical campus for the medical schools of Drexel University, and Temple University, which are located in Philadelphia as well as Lake Erie College of Osteopathic Medicine, located in Erie.[4] AHN is also home to the Allegheny-Singer Research Institute, which sponsors interdisciplinary programs to understand, treat, and prevent human diseases. WPAHS's specialty programs have received national and international recognition, particularly those based in its Bone and Joint, Cardiovascular, Neurosciences, and Oncology institutes.

Allegheny Health Network was formed from two of Pittsburgh's major historical hospitals: the Western Pennsylvania Hospital and Allegheny General Hospital. The Western Pennsylvania Hospital (West Penn), founded in 1848 and originally located in Pittsburgh's Strip District neighborhood moved to its current location in Bloomfield in 1912.[5] Allegheny General Hospital (AGH) was founded in 1886 in Pittsburgh's North Side, then the separate municipality of Allegheny City. In 1930 construction began on one of the nation's first "skyscraper" hospitals, a 22-story high rise which is now designated a Pittsburgh History and Landmarks Foundation historic landmark.[6]

Allegheny Health, Education and Research Foundation (AHERF) was established in 1983 as a nonprofit corporation to oversee the Allegheny General Hospital organization's affairs. In 1986 Sherif Abdelhak was hired as CEO and instituted a plan to create a statewide integrated health care delivery system. To accomplish this, and in reaction to its rivalry with local medical center competitor University of Pittsburgh Medical Center (UPMC), AHERF undertook an aggressive acquisition of physician practices and hospitals across the state of Pennsylvania. By the mid-1990s, AHERF had acquired two medical schools (the Medical College of Pennsylvania and Hahnemann Medical College) and five hospitals located in the Philadelphia area, as well as additional hospitals in the Pittsburgh area. However, by 1997 financial problems started to appear and AHERF initiated hospital closures to divest itself of its operations in the eastern portion of the state. In July 1998 AHERF declared bankruptcy, the largest nonprofit health care failure in U.S. history. As a result, Drexel University took over the medical school operated by AHERF. In order to avoid bankruptcy, Allegheny General Hospital and some of AHERF's other hospitals in western Pennsylvania were sold to Pittsburgh's West Penn Health System in 1999, thus forming the current West Penn Allegheny Health System.[7][8]

AHN competes against much larger health care organizations including UPMC. In April 2009 the former WPAHS filed an antitrust lawsuit in the U.S. District Court in Pittsburgh against UPMC and Highmark Inc., the region’s largest insurer. The suit claimed that UPMC and Highmark had conspired to create a monopoly. WPAHS stated that UPMC had refused to contract with smaller health insurance companies at reasonable rates and in exchange, Highmark had agreed to pay UPMC at inflated rates.[9] The lawsuit was dismissed with prejudice.[10] WPAHS filed an appeal of this judgment.[11] As of February 2011, the case is still undecided.[12]

In 2007 the hospital group issued more than $750 million in high-yield debt, the largest junk bond offering by a nonprofit health care concern. In 2008 the system had an operating loss of $89 million and a net loss of $57.8 million.[13] That same year, the U.S. Securities and Exchange Commission began an investigation of West Penn for "potentially erroneous evaluation and management claims" after the health system found $73 million in overstated accounts receivables.[14] For fiscal year 2009, the health system posted a net loss of $25.2 million compared with a $57.8 million loss in fiscal 2008, when they were forced to make a $73 million writedown. Total revenues were $1.6 billion for the year, a seven percent increase.[15]

In July 2009 the system, which employed a total of about 13,000 people,[16] announced furloughs of 185 full-time equivalent people by attrition, by eliminating vacant positions and through layoffs.

On June 29, 2010, WPAHS announced major consolidation plans to eliminate 1,500 positions and 300 beds. The plans would also close the emergency department, oncology, neuroscience, critical care, orthopedic, and cardiovascular services at West Penn Hospital in order to consolidate services at what would become the sole facility – Allegheny General Hospital.[18] Plans were finalized in October 2010.

WPAHS received financial support from a partnership with regional insurance giant Highmark in 2011. Highmark pledged $475 million over three years to strengthen and acquire the hospital system, however the partnership has prompted a Justice Department investigation due to anti-trust concerns.[21] The system received $100 million through 2011 and reopened the emergency department at West Penn Hospital.[22] On April 29, 2013, Pennsylvania state regulations allowed Highmark to acquire WPAHS outright, and announced that it would be renamed the Allegheny Health Network.[3]

In 1986, Allegheny General was the first hospital in the region to receive designation as a Level I Shock Trauma Center, the highest designation available, and its LifeFlight aeromedical service was the first to fly in the northeastern United States.[23]

In 2001 the Western Pennsylvania Cancer Institute was one of 35 centers nationwide recognized as a Center of Excellence by the Myelodysplastic Syndromes Foundation. The Institute is a nationally recognized provider of advanced treatment programs for patients with blood-related disorders.

In December 2006 the Western Pennsylvania Hospital became the first hospital in Pittsburgh and Western Pennsylvania to receive prestigious Magnet recognition status from the American Nurses Credentialing Center (ANCC). Magnet status recognizes excellence in nursing and quality patient care and only four percent of all healthcare facilities in the U.S. have achieved this status.

In 2007 Allegheny General opened the region's first dedicated inpatient Stroke Unit, which centralizes and coordinates the multidisciplinary care of stroke patients. In 2009 AGH ranked among the top 10 percent of U.S. medical centers for the treatment of stroke, according to HealthGrades, a leading independent healthcare ratings organization. The hospital has been designated as a Primary Stroke Center by the Joint Commission and was named a Stroke Center of Excellence by NeuStrategy, a Chicago-based healthcare think tank. More than 1,000 stroke patients are admitted to AGH annually. [24]

For three consecutive years – 2007, 2008 and 2009 – West Penn has been recognized as the best hospital in Pennsylvania for weight-loss surgery by HealthGrades, a leading independent health care ratings organization.[25]

The National Surgical Adjuvant Breast and Bowel Project, based at Allegheny General, is a cancer research initiative supported by the National Cancer Institute and coordinates the efforts of more than 6,000 medical professionals in the study of breast and bowel cancer. Some of the most prominent research into breast and colorectal cancer treatment and prevention has come from the NSABP.[26]

Established in 1969, West Penn Burn Center at West Penn Hospital treats more than 500 inpatients per year and serves as a national, regional and community resource dedicated to the prevention and care of burn injuries. West Penn Burn Center is the only burn center in the region verified by the American Burn Association (ABA) and the American College of Surgeons (ACS) and is the only burn center in Pennsylvania to earn ABA/ACS verification four times.[27]

In September 2010 Canonsburg General Hospital was recognized by T-System, a leader in clinical, business, and IT solutions for hospital emergency departments, at the American College of Emergency Physicians Scientific Assembly, as one of six hospitals to receive the first annual T-System Client Excellence Award. The hospital was selected from more than 1,700 facilities nationwide. Award winners represent the facilities that most effectively partnered with T-System in 2010 to improve their quality, operational and financial results in the emergency departments.[29]

In September 2010 the heart surgery program at Forbes Regional Hospital was recognized by The Society of Thoracic Surgeons (STS) as one of the 50 best in the nation. Forbes Regional’s McGinnis Thoracic and Cardiovascular Associates surgical group received three stars, the Society’s highest possible rating, in a comprehensive assessment of the nation’s heart surgery programs. Forbes Regional is one of just two hospitals in Western Pennsylvania lauded by STS for having above average patient outcomes.[30]