Allen Welsh Dulles (/ˈdʌləs/; April 7, 1893 – January 29, 1969) was an American diplomat and lawyer who became the first civilian Director of Central Intelligence and its longest-serving director to date. As head of the Central Intelligence Agency during the early Cold War, he oversaw the 1954 Guatemalan coup d'état, Operation Ajax (overthrow of Iran's elected government), the Lockheed U-2 program and the Bay of Pigs Invasion. Following the assassination of John F. Kennedy, Dulles was one of the members of the Warren Commission. Between his stints of government service, Dulles was a corporate lawyer and partner at Sullivan & Cromwell. His older brother, John Foster Dulles, was the Secretary of State during the Eisenhower Administration.

Dulles was born on April 7, 1893, in Watertown, New York,[1] one of five children of Presbyterian minister Allen Macy Dulles, and his wife, Edith F. (Foster). He was five years younger than his brother John Foster Dulles, Dwight D. Eisenhower's Secretary of State and chairman and senior partner of Sullivan & Cromwell, and two years older than his sister, diplomat Eleanor Lansing Dulles. His maternal grandfather was John W. Foster, who was Secretary of State under Benjamin Harrison, while his uncle by marriage, Robert Lansing served as Secretary of State under Woodrow Wilson.[2] Dulles was uncle to Avery Dulles, a Jesuit priest, theologian, and cardinal of the Catholic Church, who taught at Fordham University from 1988 to 2008.

Dulles graduated from Princeton University, where he participated in the American Whig-Cliosophic Society,[3] and entered the diplomatic service in 1916. In 1920, he married Clover Todd (March 5, 1894 - April 15, 1974). They had three children; two daughters: Clover D. Jebsen, ("Toddy"), and Joan Buresch Dulles Molden, ("Joan Buresch"); and one son, Allen Macy Dulles, Jr., who was wounded and permanently disabled in the Korean War and has spent the rest of his life in and out of medical care.[4] According to his sister, Eleanor, Dulles had "at least a hundred" extramarital affairs, including some during his tenure with the CIA.[5]

In 1921, while at the US Embassy in Istanbul, Dulles may have helped to expose the infamous Protocols of the Elders of Zion as a forgery to Philip Graves, a journalist working for The Times of London. The article was reprinted in The New York Times.[6]

Initially assigned to Vienna, he was transferred to Bern, Switzerland along with the rest of the embassy personnel shortly before the U.S. entered the First World War.[7] Later in life Dulles claimed to have been telephoned by the then obscure Vladimir Lenin, seeking a meeting with the American embassy on April 8, 1917.[7] After recovering from the 1918 flu pandemic he was assigned to the American delegation at the Paris Peace Conference, along with his older brother Foster.[8] From 1922-6, he served five years as chief of the Near East division of the Department of State.

In 1926, he earned a law degree from George Washington University Law School and took a job at Sullivan and Cromwell, the New York firm where his brother, John Foster Dulles, was a partner. He became a director of the Council on Foreign Relations in 1927, the first new director since the Council's founding in 1921. He was the Council's secretary from 1933 to 1944.[9]

During the late 1920s and early 1930s, he served as legal adviser to the delegations on arms limitation at the League of Nations. There he had the opportunity to meet with Adolf Hitler, Benito Mussolini, Maxim Litvinov, and the leaders of Britain and France.[10] In 1935 Dulles returned from a business trip to Germany appalled by the Nazi treatment of German Jews and, despite his brother's objections, led a movement within the law firm of Sullivan and Cromwell to close their Berlin office.[11][12] As a result of Dulles' efforts, the Berlin office was closed and the firm ceased to conduct business in Nazi Germany.[13]

As the Republican Party began to divide into isolationist and interventionist factions, Dulles became an outspoken interventionist, running unsuccessfully in 1938 for the Republican nomination in New York's Sixteenth Congressional District on a platform calling for the strengthening of U.S. defenses.[13] Dulles collaborated with Hamilton Fish Armstrong, the editor of Foreign Affairs magazine, on two books, Can We Be Neutral? (1936), and Can America Stay Neutral? (1939). They concluded that diplomatic, military, and economic isolation, in a traditional sense, were no longer possible in an increasingly interdependent international system.[14][page needed] Dulles helped a number of German Jews, such as the banker Paul Kemper, escape to the United States from Nazi Germany.[15]

After the outbreak of the Second World War, Dulles was recruited to work at the Office of Strategic Services and moved to Bern, Switzerland, where he lived at Herrengasse 23 for the duration of World War II. As Swiss Director of the OSS,[1] Dulles worked on intelligence regarding German plans and activities, and established wide contacts with German émigrés, resistance figures, and anti-Nazi intelligence officers. He was assisted in intelligence-gathering activities by Gero von Schulze-Gaevernitz a German emigrant. Dulles also received valuable information from Fritz Kolbe, a German diplomat. Kolbe supplied secret documents regarding active German spies and plans regarding the Messerschmitt Me 262 jet fighter.

Although Washington barred Dulles from making firm commitments to the plotters of the 20 July 1944 attempt to assassinate Hitler, the conspirators nonetheless gave him reports on developments in Germany, including sketchy but accurate warnings of plans for Hitler's V-1 and V-2 missiles.[16]

Dulles was involved in Operation Sunrise, secret negotiations in March 1945 to arrange a local surrender of German forces in northern Italy. After the war in Europe, Dulles served for six months as the Office of Strategic Services Berlin station chief and later as station chief in Bern.[citation needed] The Office of Strategic Services was dissolved in October 1945 and its functions transferred to the State and War Departments.

In the 1948 Presidential election, Dulles was, together with his brother, an advisor to Republican nominee Thomas E. Dewey. The Dulles brothers and James Forrestal helped form the Office of Policy Coordination. During 1949 he co-authored the Dulles–Jackson–Correa Report, which was sharply critical of the Central Intelligence Agency, which had been established by the National Security Act of 1947. Partly as a result of the report, Truman named a new Director of Central Intelligence, Lieutenant General Bedell Smith. 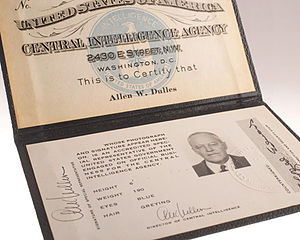 At Dulles' request, President Eisenhower demanded that Senator Joseph McCarthy discontinue issuing subpoenas against the CIA. In March 1950, McCarthy had initiated a series of investigations into potential communist subversion of the Agency. Although none of the investigations revealed any wrongdoing, the hearings were potentially damaging, not only to the CIA's reputation but also to the security of sensitive information. Documents made public in 2004 revealed that the CIA, under Dulles' orders, had broken into McCarthy's Senate office and fed disinformation to him in order to discredit him, in order to stop his investigation of communist infiltration of the CIA.[17]

In the early 1950s, the United States Air Force conducted a competition for a new photo reconnaissance aircraft. Lockheed Aircraft Corporation's Skunk Works submitted a design number called the CL-282, which married sailplane-like wings to the body of a supersonic interceptor. This aircraft was rejected by the Air Force, but several of the civilians on the review board took notice, and Edwin Land presented a proposal for the aircraft to Dulles. The aircraft became what is known as the U-2 'spy plane', and it was initially operated by CIA pilots. Its introduction into operational service in 1957 greatly enhanced the CIA's ability to monitor Soviet activity through overhead photo surveillance. The aircraft eventually entered service with the Air Force.[citation needed] The Soviet Union captured a U-2 in 1960 during Dulles' term as CIA chief.[1]

Dulles is considered one of the essential creators of the modern United States intelligence system and was an indispensable guide to clandestine operations during the Cold War. He established intelligence networks worldwide to check and counter Soviet and eastern European communist advances as well as international communist movements.[18][15][19][page needed]

In 1953, Dulles was involved, along with Frank Wisner,[20][page needed] in Operation Ajax, the covert operation that led to the removal of Mohammad Mossadeq, prime minister of Iran, and his replacement with Mohammad Reza Pahlavi, Shah of Iran. Rumors of a Soviet takeover of the country had surfaced due to the nationalization of the Anglo-Iranian Oil Company. British diplomat Christopher Woodhouse had proposed the idea of a coup d'état to President Eisenhower to try to regain British control of the oil company.

President Jacobo Arbenz Guzman of Guatemala was removed in 1954 in a CIA-led coup carried out under the code name Operation PBSUCCESS.[21]

Several failed assassination plots utilizing CIA-recruited operatives from the Mafia and anti-Castro Cubans directly against Castro undermined the CIA's credibility. The reputation of the agency and its director declined drastically after the Bay of Pigs Invasion fiasco. President Kennedy reportedly said he wanted to "splinter the CIA into a thousand pieces and scatter it into the winds."[22] 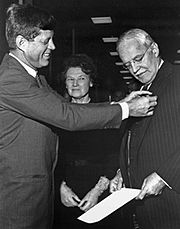 During the Kennedy Administration, Dulles faced increasing criticism.[1] In autumn 1961, following the Bay of Pigs incident and Algiers putsch, Dulles and his entourage, including Deputy Director for Plans Richard M. Bissell, Jr. and Deputy Director Charles Cabell, were forced to resign. On November 28, 1961, Kennedy presented Dulles with the National Security Medal at the CIA Headquarters in Langley, Virginia.[23] The next day, November 29, the White House released a resignation letter signed by Dulles.[24]

On November 29, 1963, President Lyndon Baines Johnson appointed Dulles as one of seven commissioners of the Warren Commission to investigate the assassination of the U.S. President John F. Kennedy. The appointment was later criticized by some historians, who have noted that Kennedy had fired him, and he was therefore unlikely to be impartial in passing the judgments charged to the Warren Commission.[citation needed] In the view of journalist and author Stephen Kinzer, Johnson appointed Dulles primarily so that Dulles could "coach" the Commission on how to interview CIA witnesses and what questions to ask, because Johnson and Dulles were both anxious to ensure that the Commission did not discover Kennedy's secret involvement in the administration's illegal plans to assassinate Castro and other foreign leaders.[25]

Dulles published the book The Craft of Intelligence in 1963[27] and edited Great True Spy Stories in 1968.

He died on January 29, 1969, of influenza, complicated by pneumonia, at the age of 75, in Georgetown, D.C.[1] He was buried in Green Mount Cemetery in Baltimore, Maryland.