Allen Joseph Ellender (September 24, 1890 – July 27, 1972) was a U.S. senator from Houma in Terrebonne Parish in south Louisiana, who served from 1937 until 1972 when he died in office in Maryland at the age of eighty-one. He was a Democrat who was originally allied with Huey Pierce Long, Jr.. As senator, he compiled a generally conservative record, voting 77 percent of the time with the Conservative Coalition on domestic issues. A staunch segregationist, he voted against the Voting Rights Act of 1965.[6][7] Unlike many conservatives, he was not a "hawk" in foreign policy and opposed the Vietnam War.[8]

Ellender was born in the town of Montegut in Terrebonne Parish, a center of Cajun culture. He was the son of Victoria Marie (Javeaux) and Wallace Richard Ellender, Sr.[9] He attended public and private schools, and graduated in 1909 from the Roman Catholic St. Aloysius College in New Orleans. (It has been reorganized as Brother Martin High School). He studied law at Tulane University Law School in New Orleans. Admitted to the bar in 1913, he launched his practice in Houma when he was twenty-three.

Ellender was appointed as the city attorney of Houma from 1913 to 1915, and then district attorney of Terrebonne Parish from 1915 to 1916. He was a sergeant in the United States Army Artillery Corps during World War I, serving from 1917 to 1918.

Ellender was a delegate to the Louisiana constitutional convention in 1921. The constitution produced by that body was retired in 1974, two years after Ellender's death. He served in the Louisiana House of Representatives from 1924 to 1936. He was floor leader from 1928–1932, when in 1929 he worked successfully against the impeachment forces, led by Ralph Norman Bauer and Cecil Morgan, that attempted to remove Governor Huey Long for a litany of abuses of power. Ellender was the House Speaker from 1932 to 1936, when he was elected to the US Senate.

In 1937 he took his Senate seat, formerly held by the fallen Huey Long and slated for the Democratic nominee Oscar Kelly Allen, Sr., of Winnfield, the seat of the Long's home parish of Winn. Allen had won the Democratic nomination by a plurality exceeding 200,000 votes, but he died shortly thereafter. His passing enabled Ellender's election. The Democrats had so dominated state politics since the disfranchisement of most blacks at the turn of the century, that the primary was the decisive election for offices.

Ellender was repeatedly re-elected to the Senate and served until his death in 1972. He gained seniority and great influence. He was the leading sponsor of the federal free lunch program, which was enacted in 1945 and continues; it was a welfare program that helped poor students.[10]

Ellender served as the powerful chairman of the Senate Agriculture Committee from 1951 to 1953 and 1955 to 1971, through which capacity he was a strong defender of sugar cane interests. He chaired the even more powerful Senate Appropriations Committee from 1971 until his death. Denoting his seniority as a Democrat in the Senate, Ellender was President pro tempore of the U.S. Senate from 1971–1972, an honorific position.

Ellender was an opponent of Republican Senator Joseph McCarthy of Wisconsin, who exposed communist infiltration in the government during the 1950s.[11]

Ellender strongly opposed the federal civil rights legislation of the 1960s, which included the Voting Rights Act of 1965 to enforce blacks' constitutional rights in voting. Many, particularly in the Deep South, had been disfranchised since 1900. He did support some Louisiana state legislation sought by civil rights groups, such as repeal of the state poll tax (a disfranchisement mechanism).[10]

Ellender rarely had serious opposition for his Senate seat. In his initial election in 1936, Ellender defeated U.S. Representative John N. Sandlin of Louisiana's 4th congressional district. Sandlin was from Minden in Webster Parish in northwest Louisiana, in the Democratic primary, 364,931 (68 percent) to 167,471 (31.2 percent). There was no Republican opposition to Ellender during much of his tenure.

Early in his tenure, the Audubon Society, with an interest in the ivory-billed woodpecker, which faced extinction, persuaded Ellender to work for the establishment of the proposed Tensas Swamp National Park to preserve bird habitat: 60,000 acres of land owned by the Singer Sewing Company in Madison Parish in northeastern Louisiana. Ellender's bill died in committee. In 1998, long after Ellender's death, Congress established the Tensas River National Wildlife Refuge.[12]

Ellender was steadfastly loyal to all Democratic presidential nominees and refused to support then Governor Strom Thurmond of South Carolina for president in 1948. That year Thurmond, the States Rights Party nominee, was also listed on the ballot as the official Democratic nominee in Louisiana and three other southern states. Ellender supported Harry Truman, whose name was placed on the ballot only after Governor Earl Kemp Long called a special session of the legislature to place the president's name on the ballot. "As a Democratic nominee, I am pledged to support the candidate of my party, and that I will do," declared Ellender, though he could have argued that Thurmond, not Truman, was technically the "Democratic nominee" in Louisiana.

In 1954, Ellender defeated fellow Democrat Frank Burton Ellis, a former state senator from St. Tammany Parish and later a short term judge of the United States District Court for the Eastern District of Louisiana. Ellender polled 268,054 votes (59.1 percent) in the party primary; Ellis, 162,775 (35.9 percent), with 4 percent for minor candidates. He faced no Republican opposition that year.[13]

In 1960, Ellender was challenged by the former Republican National Committeeman George W. Reese, Jr., a New Orleans lawyer, who in 1952 and 1954 had challenged the conservative Democratic U.S. Representative Felix Edward Hébert of Louisiana's 1st congressional district, based about New Orleans. In the 1960 campaign, Reese accused Ellender of being "soft on communism". Ellender retorted that Reese's allegation came with "ill grace for the spokesman for the member of a party which has permitted the establishment of a Red-dominated beach head [Cuba] only ninety miles from our shores to attack my record against the spread of communism."[14]

Reese campaigned across the state in the fall, accompanied at times by Richard Lowrie Hagy of New Orleans, the in-state campaign manager for both Reese and Vice President Richard M. Nixon. In Lake Charles, he claimed that Senator Ellender had been lax in protecting military installations in Louisiana from being downsized or dismantled, with the impacted military services sent to bases in other states. "There has been inadequate representation of the state in these matters," Reese said.[15]

Ellender crushed Reese's hopes of making a respectable showing: he polled 432,228 (79.8 percent); Reese, 109,698 (20.2 percent). Reese's best performance was in two parishes that voted for Richard Nixon for President" La Salle Parish (Jena) and Ouachita Parish (Monroe), but he still gained less than a third of the ballots - 31.3 percent in each. In Caddo Parish (Shreveport), Reese finished with 30 percent. Reese was only the third Republican since the Seventeenth Amendment was ratified to seek a U.S. Senate seat from Louisiana. Ellender ran 24,889 votes ahead of the John F. Kennedy-Lyndon Johnson ticket, but 265,965 voters cast in the presidential race just ignored the Senate contest, a phenomenon that would later be called an "undervote."

In 1966, Ellender disposed of two weak primary opponents, including the liberal State Senator J.D. DeBlieux (pronounced "W") of Baton Rouge and the conservative businessman Troyce Guice, a native of St. Joseph in Tensas Parish, who then resided in Ferriday, and later in Natchez, Mississippi. The Republicans once again did not field a candidate against Ellender that year.

Ellender cultivated good relationships with the media, whose coverage of his tenure helped him to fend off serious competition. One of his newspaper favorites was Adras LaBorde, longtime managing editor of Alexandria Daily Town Talk. The two "Cajuns" shared fish stories on many occasions. 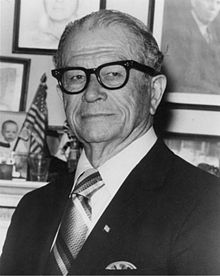 Senator Ellender late in his career

In 1972, the Democratic gubernatorial runner-up from December 1971, former state senator J. Bennett Johnston, Jr., of Shreveport challenged Ellender for renomination. Ellender was expected to defeat Johnston, but the veteran senator died in July during the primary campaign and left Johnston the de facto Democratic nominee. Nearly 10 percent of Democratic voters, however, still voted for the deceased Ellender.

Johnston became the Democratic nominee in a manner somewhat reminiscent of how Ellender had won the Senate seat in 1936 after the death of Governor Oscar K. Allen. Johnston easily defeated the Republican candidate, Ben C. Toledano, a prominent attorney from New Orleans who later became a conservative columnist, and former Governor John McKeithen, a Democrat running as an Independent in the general election because he had not been able to qualify for the primary ballot, given the timing of Ellender's death.

Ellender's immediate successor was Elaine S. Edwards, first wife of Governor Edwin Edwards, who was appointed to fill his seat from August 1, 1972 to November 13, 1972, after the election.

In the Senate, Ellender was known by his colleagues for Cajun cooking, including dishes ranging from roast duck to shrimp jambalaya. As of 2009, the Senate dining room still served "Ellender Gumbo."

Ellender Memorial High School in Houma and Allen Ellender Middle School in Marrero are named in his honor.

In 1994, Ellender was inducted posthumously into the Louisiana Political Museum and Hall of Fame in Winnfield.

The Allen J. Ellender Memorial Library on the campus of Nicholls State University in Thibodaux is named after him.

Ellender was an uncle of Bonnie Robichaux Livingston, wife of former U.S. Representative Bob Livingston of Louisiana's 1st congressional district, a Republican who served from 1977 to 1998.