Alliance of European Conservatives and Reformists

From Infogalactic: the planetary knowledge core
Jump to: navigation, search
This article is about the European political party. For the group in the European Parliament, see European Conservatives and Reformists.

The Alliance of European Conservatives and Reformists (AECR) is a conservative and eurosceptic[4] European political party, defending broader conservative and economically liberal principles.[3] It has twenty-two member parties, as well as four independent members, spread across twenty countries. Its member parties have fifty MEPs and one European Commissioner. It has two heads of state and its members form part of two further governments in the European Council. Its wider non-EU membership also includes a further 3 parties in government. It has political groups in the European Parliament, the Committee of the Regions and the Congress and Parliamentary Assembly of the Council of Europe.

The party was founded on 1 October 2009,[5] after the creation of the European Conservatives and Reformists (ECR) political group in the European Parliament. It was officially recognised by the European Parliament in January 2010. The AECR had eight members at its formation—predominantly in central and eastern Europe. It has accepted twelve more member parties since then, representing the eurosceptic centre-right.

The AECR is led by a board of directors who are elected by the Council, which represents all AECR member parties.[6] The AECR's president is Jan Zahradil MEP, and its secretary-general is Daniel Hannan MEP. The Vice-Presidents are MP Guðlaugur Þór Þórðarson, from Iceland, MEP Anna Fotyga from Poland, MP Geoffrey Clifton-Brown from the United Kingdom and Zafer Sirakaya from the AK Party in Turkey.

The AECR was formally constituted under the chairmanship of Belgian MEP Derk Jan Eppink, but this position was later transferred to Czech MEP Jan Zahradil. At the AECR's first congress in Warsaw on 8 June 2010, it was joined by Luxembourg's Alternative Democratic Reform Party. The congress was attended by UK Conservative Party Chairman Sayeeda Warsi and former Czech Prime Minister Mirek Topolanek. On 25 March 2011, the Civic Conservative Party from Slovakia joined the AECR. The Icelandic Independence Party joined the AECR in November 2011, the party's first member from outside the European Union. They were followed by Georgia's Christian-Democratic Movement in August 2012. Italy's Conservatives and Social Reformers joined the AECR in October 2012: giving the AECR its first representation in one of the four largest continental European countries. The Conservative Party of Canada became the AECR's first associate member (later renamed 'regional partners') in November 2012.

In November 2013, Turkey's ruling Justice and Development Party, the Faroe Islands' People's Party, and Romania's New Republic joined. In July 2014, Prosperous Armenia, Armenia's second largest political party, joined.[8] The Conservative Party of Georgia and New Majority joined on 1 November 2014. At the same time, the AECR formally affiliated to the European Conservatives Group in the Parliamentary Assembly of the Council of Europe.[9] The Liberal Party of Australia, Istiqlal Party of Morocco, National Party of New Zealand, and Republican Party of the United States joined as further regional partners in 2014.

The AECR adopted the Reykjavík Declaration at its Council Meeting on 21 March 2014. The declaration defines the principles that underpin the AECR. It replaces the Prague Declaration—adopted by the ECR in 2009. 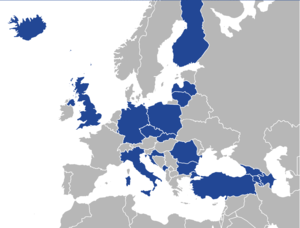 The AECR has twenty-two member parties, and a further four independent members, across twenty European countries.

The ECR group is the third-largest group in the European Parliament. Founded in 2009, before the AECR was launched, the ECR brings together 75 MEPs from 16 countries. The ECR group is led by Syed Kamall of the British Conservative Party.

Committee of the Regions

Following the creation of the ECR Group in the European Parliament in 2009, and the creation of the AECR in 2010, the ECR Group in the Committee of the Regions was formed on 10 April 2013 under the leadership of Gordon Keymer CBE and with the support of the AECR. The Group was officially announced during the 11–12 April 100th Committee of the Regions plenary session.

Parliamentary Assembly of the Council of Europe

The European Conservatives Group in the European Parliament, founded in 1970 and existing for most of its history as the 'European Democrat Group' became officially affiliated to the AECR on 29 September 2014. The EC group is lead by Samad Seyidov MP, of the New Azerbaijan Party.

As of 23 October 2014, the European Conservatives have the following members:[11]

Congress of the Council of Europe

The ECR group in the Congress of the Council of Europe brings together representatives in local government from across Europe. It has 31 members, 26 of whom represent parties in the AECR. The ECR group is led by Halldór Halldórsson of the Icelandic Independence Party.

The European Young Conservatives (EYC) is the AECR's youth wing. It brings together conservative and centre-right political parties from across Europe. As of 2015, the group has a membership of 23 political youth organisations from 22 different countries and territories. Its patron was Margaret Thatcher until her death in 2013. The current chairperson of EYC is Keti Mumalashvili from the Georgian Young Conservatives.

The Conservatives and Reformists Initiative (CRI) is a flagship project of the AECR, and its partner New Direction – the Foundation for European Reform that was launched in Tunis, Tunisia on 14 November 2015 and covered extensively on the Al Jazeera news network.

The CRI aims to strengthen the moderate Centre-Right in emerging democracies in North Africa and the Middle East. It runs practical programmes designed to strengthen the organisational capacity of each political party, support party campaign and communications operations, assist with policy development create regional support for like-minded political parties and support elected representatives at all levels, particularly in communications with constituents and the media.