From Infogalactic: the planetary knowledge core
Jump to: navigation, search
For other uses, see Allier (disambiguation).

Allier (French pronunciation: ​[aˈlje]; Occitan: Alèir, Latin: Elaver) is a French department located in the Auvergne-Rhône-Alpes region of central France named after the river Allier. Moulins is the prefecture and the INSEE and Post Code is 03. 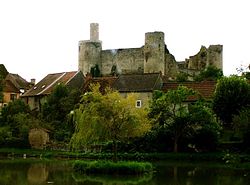 Allier department is composed of almost all of the former Duchy of Bourbonnais. It is part of the Auvergne-Rhône-Alpes region and borders the departments of Cher, Nièvre, Saône-et-Loire, Loire, Puy-de-Dome, and Creuse.

To the north and just over 500 metres above sea level, the Bourbonnais Bocage occupies one-third of the department, with two parts: the centre and the west (for the part between the Val de Cher and western boundaries of the territory). The bocage is especially remarkable for its rich forests and woodlands including the famous Forest of Tronçais but also the forests of Moladier Bagnolet, Civrais, Soulongis, Grosbois, Dreuille, Lespinasse and Suave.

Almost all of the southern area consists of Combrailles which is sometimes called High Bourbonnais, in an area that goes beyond the departmental boundaries of Creuse and Puy-de-Dôme. This area of the department rises to 778 metres at Bosse. The rivers Sioule, Bouble, and Cher have carved the most picturesque gorges in Allier.

To the east, between the Val d'Allier and the borders of Nièvre and Saône-et-Loire, the Bourbonnais Sologne has a nice balance between pastures, crops, woods and ponds: the balance between agriculture and semi-wilderness constituting a very favorable setting for fauna and flora.

In its southern extension, the Bourbonnais Mountain rises from the Puy Saint-Ambroise (442 metres) near Saint-Léon and then extends to the massif of Assisi and the Black Forest at the edge of Puy-de-Dome and Loire which is marked by the Puy de Montoncel (1,287 metres) - the highest point in Allier.

Commonly grouped under the name of Val d'Allier, the Limagne and Forterre extend on both sides of the river between Vichy and Saint-Pourçain-sur-Sioule with an essential quality of fertility. Limogne, together with Sioule and Allier, is part of the Gannat / Escurolles / Saint-Pourçain triangle while Forterre covers the Canton of Varennes-sur-Allier ending near Jaligny.

A transition zone in the middle of the country, Allier is actually a free zone between north and south. The department is wide open to Atlantic influences and it enjoys a mild and humid climate dominated by westerly winds which helps a little to differentiate it from other parts of Auvergne. The weather variances coincide with the diversity of Bourbonnais territory such as: flat regions, low altitude Bourbonnais Sologne and large floodplains, the hill country, the average altitude of 300 to 600 metres, the central part of the department, and the semi-mountainous southern townships bordering the Combraille and Forez between 700 and 1,200 metres.

There are two periods of maximum precipitation in June and October and a minimum in January and February with average of 694 millimetres in Montluçon (altitude 207 metres), 763 mm in Moulins (245 m) 778 mm in Vichy (251 m) 791 mm in Lapalisse (285 m). and nearly 1,200 mm in Assisi (1,050 m). As noted Atlantic winds are dominant from the west, northwest, or southwest. The influence of topography, especially in the valleys of Cher and Allier, also contributes to the south and north variance.

The history of Allier corresponds to the Duchy of Bourbon (Bourbonnais) with which it shares almost the entire territory.

Allier is one of the original 83 departments created during the French Revolution on 4 March 1790. It was created from parts of the former provinces of Auvergne and Bourbonnais.

In 1940, the government of Marshal Philippe Pétain chose the town of Vichy as its capital. Vichy also became the department's second sub-prefecture in 1940, since the department now found itself split by the demarcation line between the occupied and (relatively, at least initially) free zones of France. 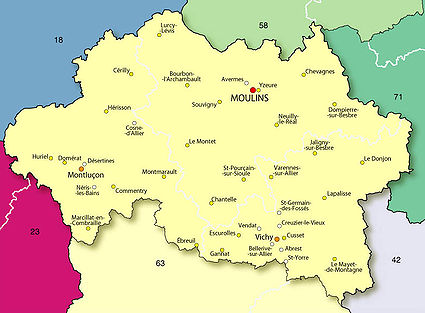 On 1 January 1997 the population of Allier was estimated at 357,100 inhabitants which represented an average density of 50 people/km². Many areas have a density less than 20 people/km².

Since the early 1980s Allier has faced many demographic handicaps. The ratio of older people is important and with low fertility rates the natural growth is negative. Meanwhile, net migration has become very negative.

At 1 January 2009 the legal population was 343,046 inhabitants. The fertility rate was slightly lower than the national average in 2007 but nevertheless would renew of the Allier population if not for the lack of jobs leading to the exodus of young people to more favourable employment areas thus confirming a negative net migration.

Allier has three major cities, Montlucon, Vichy, and Moulins by size. The rest of the department includes some small towns and villages scattered mainly along the rivers. The few villages are far from each other and it is generally a sparsely populated department. Until the end of the 19th century, however, the population was increasing through the development of its cities (industries at Montlucon and Moulins, spas in Vichy) compensated by the rural exodus. The department then passed 420,000 inhabitants. After the population losses of the First World War the population stabilized and grew a little again in the 1960s. Since then, due to the continuing rural exodus and especially the decline of old industries, the population has decreased and aged steadily from 386,533 inhabitants in 1968 to 343,046 in 2009.

The evolution of the number of inhabitants is known through the population censuses conducted in the communes of the department since 1793. From the 21st century, a census of communes with fewer than 10,000 inhabitants is held every five years, unlike larger towns that have a sample survey every year.[Note 1]

Jean-Luc Marx, the prefect of Lot, was named the prefect of Allier on 1 June 2011, replacing Pierre Monzani who was appointed Prefect of Seine-et-Marne on 25 May 2011.

Pierre Monzani had been prefect of Allier since 14 January 2009. Born on 12 May 1958 in Villerupt (Meurthe-et-Moselle), Pierre Monzani holds a civil service agrégation in history and a DEA in history and civilization. A former student of the Ecole Normale Superieure (Saint-Cloud) and of École nationale d'administration (ENA), since August 2006 he has been director of INHES (National Institute of Advanced Security Studies).[4]

In the Senate elections in 2008 the left took one of the two Senate seats in Allier formerly held by the right. Mireille Schurch, PCF Mayor of Lignerolles, was elected:

In the local elections of March 2008, Allier department was won by a majority of the left. The URB (Republican Union for Bourbonnais, right) had headed the department between 2001 and 2008, with the last year with only one vote majority. From 2008 the left coalition was in control also with a majority of one vote (10 PC, 6 PS, 2 PRG, 18 seats in total), facing 17 councilors from the URB. Allier Council is chaired by a Communist, Jean-Paul Dufregne as for Val-de-Marne department in Île-de-France. The General Council of Allier has also been led - after decentralization - by a communist: Jean-Claude Mairal (1998-2001). The loss of his mandate was included in a national dynamic of victory of the right.

The three major cities of Allier are run by mayors of the right who were re-elected in the 2008 municipal elections in the first round by Daniel Dugléry in Montluçon and in the second round for Pierre-André Périssol in Moulins, and Claude Malhuret in Vichy.

History of the left in Allier

The department was distinguished by communist votes in early voting which continued until after the Second World War with the two major political parties of the left being the PCF and the SFIO which have now become the Socialist Party.

The small town of Commentry has the distinction of being the first town in France[5] to elect a socialist mayor in 1882: Christophe Thivrier. Another local figure, Pierre Brizon, an MP in 1910, was typically a member for sharecroppers.[6]

Allier remains a land of rural communism (still 14.66% in the 2004 regional elections - the second best result for the party after Somme) in a sometimes difficult cohabitation with the Socialist Party.

For the causes of their success it may be noted that historically Allier has been a department where vast properties were combined into sharecropping. Sharecropping only spread in the 15th century[10] and was not disturbed by the sale of national assets to the Revolution.[11] In the 19th century large properties (100 hectares or more) occupied about half of the land, and even more than 70% in the north of the department. In the south, small properties dominate.[11]

Sharecropping continued as a form of land development and it involved 40% of the land in 1892 (only 7% overall for France).[12] Adverse conditions made sharecroppers promote the creation of rural unions between 1904 and 1911 (the third greatest number per department in France after Hérault and Landes). Despite poor results the mobilization was important and promoted the election of left-wing candidates.[13]

The industries most represented are the food industry, wood and furniture, chemical, foundries and metalworking, rubber, machinery and electrical equipment, automotive, weaponry, textiles, building, and the spas.

According to studies by INSEE agriculture would be about 7 to 8% of departmental gross domestic product.

Marked by the imprint of the Dukes of Bourbon, Allier is a land of rivers, bocage, and small mountains. Landscapes such as Bourbonnais bocage, the gorges of the Sioule, and the Forest of Tronçais are places suitable for the practice of outdoor activities: hiking, fishing, and white water sports. Hydrotherapy is one of the leading sectors of Bourbonnais tourism with the international spa at Vichy.

This nature preserve also features a multitude of castles (over 500), Romanesque churches and beautiful houses much of which is the heritage of the Bourbons. Bourbon cuisine reflects the history of the province and provides quality products: Pâté aux pommes de terre, Charolais beef, wines from Saint-Pourçain AOC, Charroux mustard, and Vichy pastilles.

Among the tourist sites to visit are:

The pâté aux pommes de terre is one of the specialities of the Allier, as well as of the neighboring Limousin region. The Allier River is one of the rare places in Southern Europe where the freshwater grayling (Thymallus thymallus), known in French as ombre des rivières, occurs in a natural habitat.[14] This fish is much valued in French gastronomy for its fine and delicate texture and is best eaten along with a light wine.[15]

Saint-Pourçain AOC wine is produced in Allier and the oak from the forest of Tronçais is one of the most favoured in the construction of wine barrels.[16]

In 2008 the department had 7.5% of second homes. This table shows the main communes of Allier with second homes and which occasionally exceed 10% of total housing.

The department has attracted many foreigners, English, Belgian, Swiss, and Dutch. They have acquired many second homes by renovating and bringing unmatched cultural diversity to Allier.

We therefore find many communes have become "European" such as Pouzy-Mésangy which today has many English and Swiss residents.

Allier is traversed by the border between Occitan and French.[19]

For a long period the people of Allier did not speak standard French but one of the following local languages: