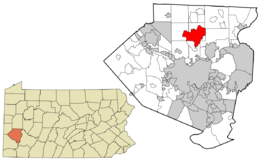 Allison Park is a census-designated place in Allegheny County, Pennsylvania. It is a suburb of Pittsburgh and is located within Hampton, McCandless, and West Deer townships. It had a population of 21,552 at the 2010 census.[1]

Allison Park in the 18th century was called Tally Cavey. Tally Cavey was part of the large Pitt Township.

The word Talley Cavey is Celtic for "hill over the borough". Early Irish settlers named it after Tullycavy on the Ards Peninsula outside Greyabbey, County Down, Ireland.[2] The town started in the woods that are now along Mt. Royal Boulevard, and continued until it reached what is now the Pennsylvania Turnpike.