From Infogalactic: the planetary knowledge core
Jump to: navigation, search
Not to be confused with Allotrophy. 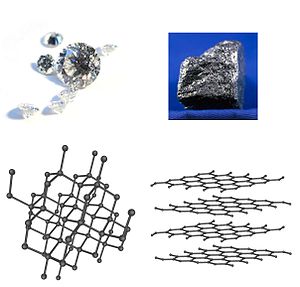 Diamond and graphite are two allotropes of carbon: pure forms of the same element that differ in crystalline structure.

The concepts of allotropy was originally proposed in 1841 by the Swedish scientist Baron Jöns Jakob Berzelius (1779–1848).[2] The term is derived from the Greek άλλοτροπἱα (allotropia; variability, changeableness).[3] After the acceptance of Avogadro's hypothesis in 1860 it was understood that elements could exist as polyatomic molecules, and the two allotropes of oxygen were recognized as O2 and O3.[2] In the early 20th century it was recognized that other cases such as carbon were due to differences in crystal structure.

Differences in properties of an element's allotropes

Allotropes are different structural forms of the same element and can exhibit quite different physical properties and chemical behaviours. The change between allotropic forms is triggered by the same forces that affect other structures, i.e. pressure, light, and temperature. Therefore, the stability of the particular allotropes depends on particular conditions. For instance, iron changes from a body-centered cubic structure (ferrite) to a face-centered cubic structure (austenite) above 906 °C, and tin undergoes a modification known as tin pest from a metallic form to a semiconductor form below 13.2 °C (55.8 °F). As an example of allotropes having different chemical behaviour, ozone (O3) is a much stronger oxidizing agent than dioxygen (O2).

Typically, elements capable of variable coordination number and/or oxidation states tend to exhibit greater numbers of allotropic forms. Another contributing factor is the ability of an element to catenate.

Examples of allotropes include: 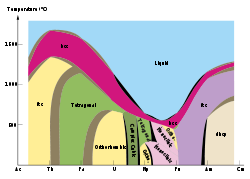 Phase diagram of the actinide elements.