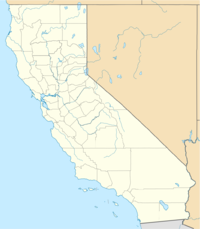 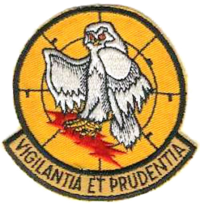 Emblem of the 682d Radar Squadron

Almaden Air Force Station was established in 1954 by Air Defense Command as one of a planned deployment of forty-four Mobile radar stations to support the permanent ADC Radar network in the United States sited around the perimeter of the country. This deployment was projected to be operational by mid-1952. Funding, constant site changes, construction, and equipment delivery delayed deployment. Almaden AFS was located on the summit of Mount Umunhum in the Santa Cruz Mountains, the station is a few miles south of San Jose, California and sits 3,486 feet (1,063 m) above Almaden Valley. Great difficulties were encountered in construction at this site. During fiscal year 1957, the Air Defense Command held up construction due to funding shortfalls.

The 682nd Aircraft Control and Warning Squadron was assigned to the new station by the 28th Air Division on September 1, 1957. It became operational on March 21, 1958,[1] equipped with AN/FPS-20 and twin AN/FPS-6 radars. In 1961, the site received an AN/FPS-24 radar, but could test the radar only on a not-to-interfere basis with television transmissions. This radar became operational in 1962, and the AN/FPS-20 was removed soon afterward and its concrete foundation was re-purposed as a helipad. In 1963, an AN/FPS-90 replaced the second AN/FPS-6 height-finder and the original AN/FPS-6 was removed and replaced with an AN/MPS-14 height finder adjacent to the AN/FPS-24 radar tower.

During 1961, Almaden AFS joined the Semi Automatic Ground Environment (SAGE) system, feeding data to DC-18 at Beale AFB, California. After joining, the squadron was re-designated as the "682d Radar Squadron (SAGE)". In 1963, the SAGE site was switched to DC-17 at Norton AFB, California. Also on 31 July 1963, the site was re-designated as NORAD ID Z-96. In 1979 Almaden AFS came under Tactical Air Command (TAC) jurisdiction with the inactivation of Aerospace Defense Command and the creation of ADTAC. Operations ceased on 1 April 1980 as a result of budget restrictions, and the general phase down of air defense radar stations.

The station operated a Ground-to-Air Transmitter-Receiver (GATR) atop the summit of Mount Umunhum until the completion of the AN/FPS-24 radar in 1962. To eliminate radio frequency interference from the AN/FPS-24 radar, the GATR was then moved one mile west to the summit of Mount Thayer. The original GATR building was subsequently converted to supply storage and ultimately as a training room facility.

The station today is abandoned and off-limits to the general public.[2] It was acquired in 1986 by the Midpeninsula Regional Open Space District (MROSD). The site is now a part of the Sierra Azul Open Space Preserve although it is not yet open to the public because of environmental hazards (asbestos, black mold, and lead-based paint). The MROSD estimates it will take at least US$13.1 million to clean up the base for public use.