From Infogalactic: the planetary knowledge core
Jump to: navigation, search
For other uses, see Aloha (disambiguation). 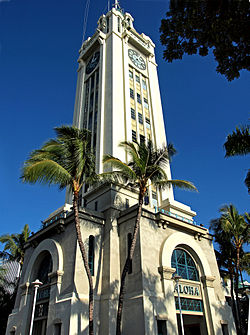 The Aloha Tower has greeted vessels to port at Honolulu Harbor since September 11, 1926

Aloha (pronounced [əˈlo.hə]) in the Hawaiian language means affection, peace, compassion, and mercy.[1] Since the middle of the 19th century, it also has come to be used as an English greeting to say goodbye and hello.[2] "Aloha" is also included in the state nickname of Hawaii, the "Aloha State."

The word aloha derives from the Proto-Polynesian root *qarofa, and ultimately from Proto-Polynesian.[3][4][5] It has cognates in other Polynesian languages, such as Samoan alofa and Māori aroha, also meaning "love."[5]

A folk etymology claims that it derives from a compound of the Hawaiian words alo meaning "presence," "front," "face," or "share;" and ha, meaning "breath of life" or "essence of life." Although alo does indeed mean "presence," etc. by itself, the word for "breath" has a long A (hā), whereas the word aloha does not. 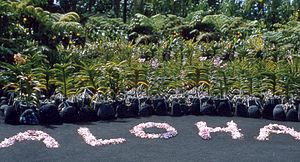 The use of the word as a greeting has been reconstructed to Proto-Polynesian.[6] Before contact with the West, other words used for greeting included welina and anoai. Today, "aloha kakahiaka" is the phrase for "good morning." "Aloha ʻauinalā" means "good afternoon" and "aloha ahiahi" means "good evening." "Aloha kākou" is a common form of "welcome/goodbye to all."

In modern Hawaiʻi, numerous businesses have aloha in their names, with more than three pages of listings in the Oʻahu phone book alone.

Recent trends are popularizing the term elsewhere in the United States. Popular entertainer, Broadway star and Hollywood actress Bette Midler, born in Honolulu, uses the greeting frequently in national appearances. The word was also used frequently in the 1968 and 2010 versions of the hit television drama Hawaii Five-0. In the influential 1982 film comedy Fast Times at Ridgemont High the student and surfer Jeff Spicolli (played by Sean Penn) uses the greeting with the eccentric teacher Mr. Hand (Ray Walston), who had earlier made use of the greeting himself. The Aloha Spirit is a major concept in Lilo & Stitch, a Disney series of movies and TV shows, set in Hawaiʻi.[citation needed] The drama series Lost, shot in Hawaiʻi, has a thank you note at the end of the credits saying "We thank the people of Hawaiʻi and their Aloha Spirit". Aloha is a term also used in the Nickelodeon program Rocket Power.

Arguably the most famous historical Hawaiian song, "Aloha ʻOe" was written by the last queen of Hawaii, Liliʻuokalani.

The term inspired the name of the ALOHA Protocol introduced in the 1970s by the University of Hawaii.

In Hawaiʻi someone can be said to have or show aloha in the way they treat others; whether family, friend, neighbor or stranger.