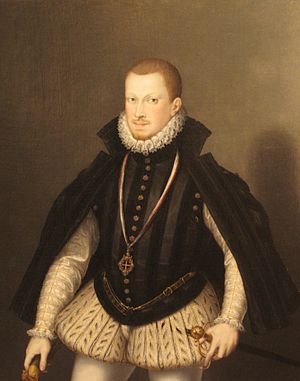 Portrait of King Sebastian I of Portugal; 1575, Kulturhistorisk Museum.

Alonso Sánchez Coello was born in Benifairó de les Valls, near Valencia, and spent his childhood there, until the death of his father when he was around ten years old. He was educated in Portugal at his grandfather's home. Coello's years in Portugal and his family name of Portuguese origin led to a long-standing belief that he was in fact Portuguese. His grandfather (after whom he was named) was in the service of King John III of Portugal who sent the young painter to study with Anthonis Mor (also known as Antonio Moro) in Flanders around 1550. He was under the service of Antoine de Granville, bishop of Arras, learning from Mor. While studying in Flanders, Coello also spent time copying some of Titian's works.

Sánchez Coello married Louisa Reyaltes in either 1560 or 1561 in Valladolid, and they had seven children. Coello's daughter, Isabel Sánchez (1564–1612), became a painter. She studied and helped in her father's workshop. The painter moved with the court to Toledo and finally settled in Madrid in 1561. Coello worked on religious themes for most of the palaces, particularly for El Escorial, and larger churches. Philip II held him in high esteem and was godfather to two of his daughters. The painter spent the remainder of his life at the court, becoming a personal favourite of the king and acquiring honours and wealth. Among his disciples were Juan Pantoja de la Cruz and Felipe de Liaño. Lope de Vega praised Coello in his work Laurel to Apolo. Alonso Sánchez Coello died in Madrid on 8 August 1588. 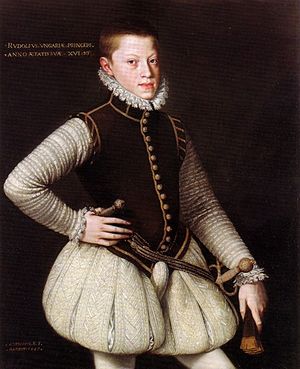 Sánchez Coello was a follower of Titian, and, like him, excelled in portraits and single figures, elaborating the textures of his armours, draperies, and such accessories in a manner very masterly manner; this had a notable influence on Velázquez's style regarding those objects. From Mor, Coello learned precision in representation, and from Titian he incorporated Venetian gold tones, generous workmanship, and the use of light on a canvas.

Sánchez Coello produced both portraits and religious paintings. The religious works, many of which were created for El Escorial, are conventional and undistinguished. It is for his portraits that he is remembered. They are marked by an ease of pose and execution, a dignity and sobriety of representation, and warmth of colouring. Although influenced by the paintings of both Mor and Titian, these portraits display an original talent and reflect admirably the modesty and formality of the Spanish court. Paintings of Philip II (c. 1580) and Infanta Isabel Clara Eugenia (1571), both in the Prado, Madrid, are two of his finest works. Among his religious paintings is the St. Sebastian in the church of San Geronimo, also in Madrid.

A large group portrait known as "The Royal feast" and depicting King Philip II of Spain banqueting with his family and courtiers, signed and dated ASC ANNO 1596 at bottom right,[1] is one of the few group representations of the royal family and a rare example of Spanish collective portraiture. In 1928 the painting was purchased by National Museum in Warsaw and was displayed in the Gallery of Spanish Paining of the National Museum in Poznań from 1956[1] till 2012. This painting was probably accomplished by a disciple, hence the dating.

Sánchez Coello's reputation as a portraitist has been diminished by the innumerable copies and imitations that wrongly bear his name. While his debt to Mor is evident, Sánchez Coello brought distinctive qualities to the court portrait, notably a sharp sense of colour, a crispness of execution and a heightened realism.

There has not been a biography of Coello, and many of his works are still confused with those of Sofonisba Anguissola, who painted royal portraits in the same period, and Juan Pantoja de la Cruz, Coello's disciple. In 1990 the Museo del Prado held the exhibition: Sánchez Coello and the Portraiture at the court of Philip II.