Alphonse Legros (8 May 1837 – 8 December 1911) was a French, later British, painter, etcher, sculptor, and medallist.[1] He moved to London in 1863 and later took citizenship. He was important as a teacher in the British etching revival.

Legros was born in Dijon; his father was an accountant, and came from the neighbouring village of Véronnes. While young, Legros visited the farms of his relatives, and the peasants and landscapes of that part of France are the subjects of many of his works. He was sent to the art school at Dijon with a view to qualifying for a trade, and was apprenticed to Maître Nicolardo, house decorator and painter of images. In 1851, Legros left for Paris to take another situation; but passing through Lyon he worked for six months as journeyman wall-painter under the decorator Beuchot, who was painting the chapel of Cardinal Bonald in the cathedral.

In Paris, Legros studied with Charles-Antoine Cambon, scene-painter and decorator of theatres. He attended also the drawing-school of Lecoq de Boisbaudran (the "Petite école") where he found himself in sympathy with Jules Dalou and Auguste Rodin. In 1855, he attended the evening classes of the École des Beaux Arts. 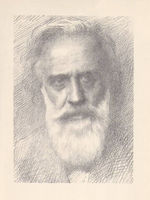 Legros sent two portraits to the Paris Salon of 1857: one was rejected, and formed part of the exhibition of protest organized by François Bonvin in his studio; the other, which was accepted, was a profile portrait of his father. This work was presented to the museum at Tours by the artist when his friend Jean-Charles Cazin was curator. Champfleury saw the work in the Salon, and sought out the artist to enlist him in the "Realists," a group round Gustave Courbet.

In 1859, Legros's L'Angelus was exhibited, the first of the church interiors for which he was best known. Two years later Ex Voto (1861; Musée des Beaux-Arts de Dijon) was exhibited, but only obtained a mention at the Salon. He moved to England in 1863 and in 1864 married Frances Rosetta Hodgson. At first he lived by his etching and teaching. He then became teacher of etching at the South Kensington School of Art, and in 1876 Slade Professor at University College London in succession to Edward Poynter.[2]

Whilst teaching at the Slade School Legros taught a large contingent of women, who came to be known as the Slade Girls.[3] Through his field of sculpture he encouraged the design of medals based upon the Italian renaissance style of portrait, illustrating the character, profession or life of the individual portrayed.

The Slade Girls attracted commissions from a range of societies and organisations due to the beauty and skill of their work. Pupils of note include the Casella sisters (Ella and Nelia), Jessie Mothersole, Fedora Gleichen, Lilian Swainson (later Hamilton) and Elinor Hallé.[4] 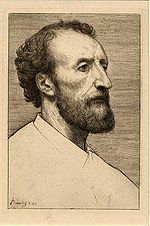 Portrait etching of Dalou by Legros

Legros was naturalized as a British citizen in 1881, and remained at University College for 17 years. He would draw or paint a torso or a head for the students in an hour or less; in the painting school he insisted on a good outline, preserved by a thin rub in of umber, and then the work was to be finished in a single painting.

Legros picked up the art of etching by watching a college in Paris working at a commercial engraving, and taught himself the making of medals. He considered the traditional journey to Italy an important part of artistic training, he gave part of his salary to augment the income available for a travelling studentship. He died in Watford.

Later works, after Legros resigned his professorship in 1892, returned to the manner of his early days—imaginative landscapes, castles in Spain, and farms in Burgundy, etchings such the series of The Triumph of Death, and the sculptured fountains for the gardens of the Duke of Portland at Welbeck Abbey. Pictures, drawings and etchings by Legros, went to the following galleries and museums: 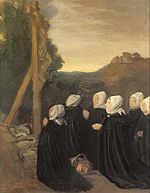 A. Legros - The Calvary, Orsay 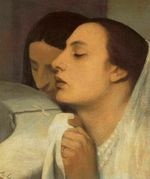 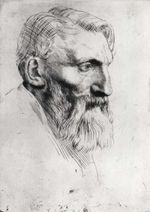 Portrait etching of Rodin by Legros