Altadena is an unincorporated[3] area[4] and census-designated place in Los Angeles County, California, United States, approximately 14 miles (23 km) from the downtown Los Angeles Civic Center, and directly north of the city of Pasadena, California. The population was 42,777 at the 2010 census, up from 42,610 at the 2000 census.

In the mid-1860s, Benjamin Eaton first developed water sources from the Arroyo Seco and Eaton Canyon to his vineyard near the edge of Eaton Canyon. This made possible the development of Altadena, Pasadena, and South Pasadena. He did the construction for B.D. Wilson and Dr. John Griffin, who jointly owned the Mexican land grant of Rancho San Pascual, about 14,000 acres (57 km2) that was the future sites of these three communities. They hoped to develop and sell this land in a real estate plan called the San Pasqual Plantation. Their efforts failed by 1870, despite Eaton's irrigation ditch that drew water from the site of present day Jet Propulsion Laboratory in Arroyo Seco. They had failed because the land was relatively inaccessible and few believed crops could thrive that close to the mountains.

Eaton tried to sell the land for the partners, and in late 1873 he helped broker a deal with Daniel Berry, who represented a group of investors from Indiana, to buy 4,000 acres (16 km2) of the rancho. This included the land of present day Altadena, but they developed a 2,500 acres (10 km2) section further south as Pasadena. In 1881, the land that would later become Altadena was sold to the John and Fred Woodbury, brothers who launched the subdivision of Altadena in 1887. The land remained mostly agricultural; however, several eastern millionaires built mansions along Mariposa Street, and a small community developed through the 1890s and into the next century.

In 1880, Capt. Frederick Woodbury, and his brother, John Woodbury of Marshalltown, Iowa, purchased 937 acres (3.79 km2) known as the Woodbury Ranch. John Woodbury established the Pasadena Improvement Company in 1887, with a plot plan of residential development referred to as the Woodbury Subdivision. They contacted Byron O. Clark, who established a nursery in the foothills in 1875, and had since moved away. He called his nursery "Altadena Nursery", a name he coined from the Spanish "alta" meaning "upper," and "dena" from Pasadena. Woodbury asked if he could use the name "Altadena" for his subdivision and Clark agreed.

The newly sprouted community of Altadena immediately began to attract millionaires from the East. In 1887 Andrew McNally, the printing magnate from Chicago, and his good friend Col. G. G. Green, had built mansions on what was to become Millionaire's Row; Mariposa Street near Santa Rosa Avenue. Newspaper moguls William Armiger Scripps and William Kellogg built homes side by side just east of Fair Oaks Avenue. A bit farther east, Zane Grey bought a home from Arthur Herbert Woodward, and added a second-floor study. The famous Benziger Publishing Company built a mansion on the corner of Santa Rosa Avenue (Christmas Tree Lane) and Mariposa. Mariposa was taken from the Spanish name for a butterfly. The grandson of Andrew McNally, Wallace Neff, became a famous Southern California architect. He started his career in Altadena with the design and construction of St. Elizabeth of Hungary Catholic Church (parish est.1918, which was dedicated in October 1926.

Over the years Altadena has been subject to attempted annexation by Pasadena. Annexation was stopped in 1956 by community campaigns, though it has been resurrected several times since by Pasadena without success. Had the annexation succeeded, Pasadena would be the 108th largest city in the United States.

While Altadena long refused wholesale annexation by neighboring Pasadena, the larger community nibbled at its edges in several small annexations of neighborhoods through the 1940s. With early 1960s redevelopment in Pasadena, the routing of extensions of 134 and 210 freeways, and lawsuits over the desegregation of Pasadena Unified School District, there was white flight and convulsive racial change in Altadena. In 1960, its black population was under four percent; over the next 15 years, half the Caucasian population left, and was replaced by people of color, many of whom settled on the west side of town after being displaced by Pasadena's redevelopment and freeway projects.

The name Altadena derives from the Spanish alta, meaning "upper", and dena from Pasadena; the area is adjacent to, but at a higher elevation than, Pasadena.[7]

Altadena experiences hot and dry summers that are followed by warm and windy falls. Summer doesn't lose it's grip on Altadena until late October or early November because of the Santa Ana winds that tend to heat up and dry out the air as they descend from the mountains above. Winters are wet and mild. Occasionally, temperatures will fall below freezing. Snow is possible, but it falls a few nights per decade and is not measurable. Winter monthes average about 10 of days in the 70's, however it has been known to reach the 80's and rarely the middle 90's in the middle of winter. According to the Köppen Climate Classification system, Altadena has a warm-summer Mediterranean climate, abbreviated "Csb" on climate maps.[8]

On the night of November 30, 2011, Altadena and surrounding foothill communities where stuck by the fiercest Santa Ana wind event ever recorded. Winds were sustained between 70 and 110 miles per hour inside city limits. Henniger flats, a relatively tall hill between Mount Wilson and Altadena recorded an unconfirmed wind gust of 167 MPH before the Anemometer was ripped off the building. Winds toppled thousands of trees and power was knocked out in some places for up to a week. Schools were closed, while some homes were damaged, and nearly every tree in the city suffered considerable damage. A state of an emergency was declared and school were closed. No lives or entire structures were lost, but there were some possibly fatal injuries. This event was very rare and takes many fragile ingredients to occur within the atmosphere.

According to the 2010 United States Census, Altadena had a median household income of $82,895, with 10.7% of the population living below the federal poverty line.[12]

There were 14,780 households out of which 34.1% had children under the age of 18 living with them, 52.3% were married couples living together, 15.2% had a female householder with no husband present, and 27.8% were non-families. 21.8% of all households were made up of individuals and 7.1% had someone living alone who was 65 years of age or older. The average household size was 2.82 and the average family size was 3.29.

Altadena is part of the County of Los Angeles and is politically run by the Los Angeles County Board of Supervisors who have executive, legislative and judicial powers. There are five members of the Board of Supervisors, elected by geographic district. Altadena is in District five, presently represented by Supervisor Michael D. Antonovich. In 1975, a group of Altadenans formed The Altadena Town Council with the help of Los Angeles County Supervisor Baxter Ward and the Pasadena Chapter of the League of Women Voters.

The Altadena Town Council acts as an ombudsman group to express to county, state and federal agencies the will and wishes of the Altadena community. Altadena is identified collectively by eight census tracts, (U.S. Census Bureau) from each of which two resident census tract representatives are elected. The Altadena Town Council meets monthly at the Altadena Community Center to provide a forum for residents and government officials to convene. The council has no legislative powers and makes no legal decisions for the community; it only operates to express consensus to governmental officials.

In the United States House of Representatives, Altadena is in California's 27th congressional district, represented by Democrat Judy Chu.[15] 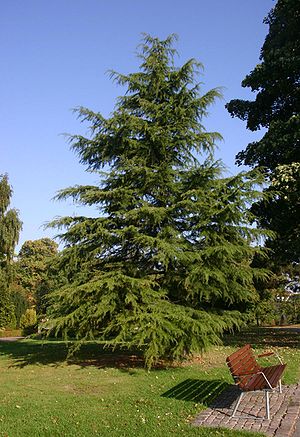 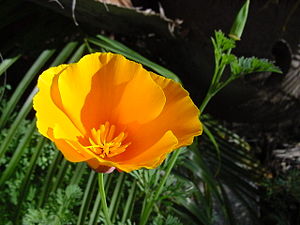 Official tree: The Deodar Cedar (Cedrus deodara). Indigenous to the Himalayas, the deodar was brought as seeds to Altadena in 1883 by Founder John Woodbury who saw the beautiful trees in Italy. After growing the trees for two years, the trees were transplanted to Santa Rosa Avenue where they now stand majestically as Christmas Tree Lane.

Official flower: The California Golden Poppy (Eschscholzia californica). Indigenous to the southland, the golden poppy was a landmark to Spanish sailors who recognized the area by a sweeping gold carpet. The sailors referred to the marvelous vision as sabanilla de oro, or, "altar cloth of gold." 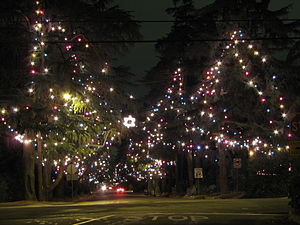 Christmas Tree Lane is a 0.7-mile (1.1 km) stretch of Santa Rosa Avenue from Woodbury Road to Altadena Drive. It has been a holiday attraction since 1920, and it is the oldest large-scale outdoor Christmas lighting venue in the world. Each December, members of the Christmas Tree Lane Association[18] festoon the 110 still standing giant deodars that line the street with thousands of Christmas lights. Christmas Tree Lane was placed on the National Register of Historic Places in 1990, and is a California Historical Landmark.

The historic Mount Lowe Railway was a scenic railway that once carried passengers to any of four resort hotels high in the San Gabriel Mountains above Altadena and Pasadena. Although the mountains and the remains of the railway are not strictly in Altadena, the most direct trail to the sites, the Sam Merrill Trail, starts in Altadena at the top of Lake Avenue, and leads to Mount Echo, about 3 miles (4.8 km). Chaney Trail, just west of the intersection at Fair Oaks Avenue and Loma Alta Street, is a forestry service road leading to the old right of way. The Mount Lowe Railway site was placed on the National Register of Historic Places in 1993.

For hiking enthusiast, Altadena is also home to a number of hiking trails, including the trail to the Dawn Mine, which can be reached via Chaney Trail to Sunset Ridge Trail. Arrows painted on large boulders direct hikers along the way.

The Cobb Estate at the top of Lake Avenue is now a free botanical garden, operated by the United States Forest Service. It is guarded by its historic gates, which are easily bypassed to allow visitors and hikers to ascend its long and winding paved driveway to the site of what was once one of Altadena's premier mansions. This site is also found alongside the Sam Merrill Trail, which accesses Las Flores Canyon on the way to Echo Mountain.

Farnsworth Park located on Lake Avenue is a large county park that offers picnic grounds, play areas, and a club house and amphitheater. It was placed in the National Register of Historic Places in 1997.