The Altaians are presented by two ethnographic groups:

The Northern and Southern Altayans formed in the Altay area on the basis of tribes of Kimek-Kipchaks.[2][3] 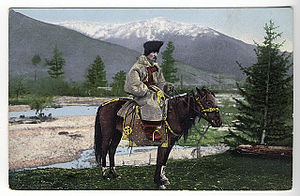 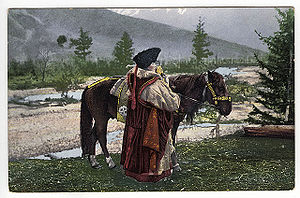 The Altaians were annexed by the Four Oirat in the 16th century. Mongols called them "Telengid" or "Telengid aimag" in period of the Northern Yuan dynasty. After the fall of the Zunghar Khanate in the 18th century, the Altaians were subjugated by the Qing Dynasty; and they were called by the Qing court as Altan Nuur Uriyangkhai.[4] However, Altaians are not related to the Uriyangkhai - a distinct neighbouring Oirat-Mongol ethnic group in Mongolia.

They have had skills in metalworking dating back to the 2nd millennium BC.[5][better source needed] The Altay came into contact with Russians in the 18th century. In the tsarist period, the Altay were known as oirot or oyrot (this name means oirat and would later be carried on for the Oyrot Autonomous Oblast). The Altay report that many of them became addicted to the Russians' vodka, which they called "fire water".[6]

The Altay were originally nomadic, with a lifestyle based on hunting / trapping and pastoralism (mainly cattle, sheep, goats), but many of them settled as a result of Russian influence. In regard to religion, some of the Altay remain Tengriists or Shamanists, while others (in a trend beginning in the mid-19th century) have converted to the Orthodox. (The Altai mission took shape under Saint Makarii Glukharev, Apostle to the Altai.) In 1904, a religious movement called Ak Jang or Burkhanism arose, perhaps in response to Russian colonization.[7]

Prior to 1917 the Altai were actually considered to be many different ethnic groups.[8]

With the rise of the 1917 revolution, the Altay attempted to make their region a separate Burkhanist republic called Oyrot, but their support for the Mensheviks during the Civil War led to the venture's collapse after the Bolshevik victory and the rise of Joseph Stalin. In the 1940s, the Altay were accused of being pro-Japanese, and the word "oyrot" was declared counterrevolutionary. By 1950, Soviet industrialization policies brought Russian immigrants reducing the proportion of Altay from 50% to 20% of the population.[9] Ethnic Altaians currently make up about 31% of the Altai Republic's population.[10]

According to the 2010 Russian census, there was a total of 69,963 Altaians who resided within the Altai Republic. This represented 34.5% of the total population of the republic, compared with 56.6% ethnic Russians, which makes the former a minority in their own homeland. However, ethnic Altaians have a much higher fertility rate than Russians and other Slavic peoples who have transplanted into the region, and while the median age of the Altaian population is much lower than Russians, the Altaian population growth is expected to continue exceeding that of the others for the foreseeable future.