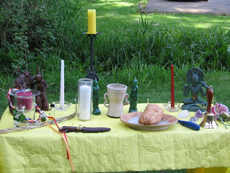 An altar with candles, chalice, and athame

A Wiccan altar is a "raised structure or place used for sacrifice, worship, or prayer",[1] upon which a Wiccan practitioner places several symbolic and functional items for the purpose of worshiping the God and Goddess, casting spells, and/or saying chants and prayers.

The altar is often considered a personal place where practitioners put their ritual items. Some practitioners may keep various religious items upon the altar, or they may use the altar and the items during their religious workings. According to Scott Cunningham, a popular Wiccan author, the left side of the altar should be considered the Goddess area; feminine or yonic symbols such as bowls and chalices, as well as Goddess representations and statues should be placed on the left. [2] The right side is designated for the God; phallic symbols such as the athame and the wand are placed to the right side, as well as God statuary and his candle.[3] The left and right associations vary according to personal preference, but the center area is almost always considered the "both" area, or the working area. In the center of the altar are kept the main symbols of the Wiccan faith, such as the pentacle.[4]

Some Wiccans arrange their altars to represent all four elements and directions.[5][6] In the North the earth element is represented; in the east is air, in the south is fire, and in the west water. These elements can be represented in various ways, but generally do not vary in elemental and directional correspondences. When placing items on an altar or when "calling on the elements" (a practice involving inviting the elements to be a part of the circle and lend their power) a practitioner will move deosil (clockwise or sunwise) and when dismissing the elements they will move widdershins (counter-clockwise).[citation needed]

Common items on a Wiccan altar include:

Some of the items represent the Earth's four elements, but elements may be represented more literally, with gems, salt, water, plant material, insect casings, etc.