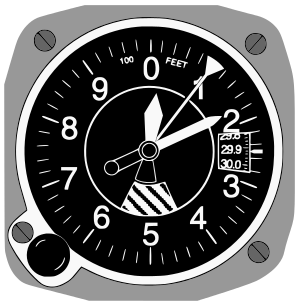 Diagram showing the face of the "three-pointer" sensitive aircraft altimeter displaying an altitude of 10,180 feet.

An altimeter or an altitude meter is an instrument used to measure the altitude of an object above a fixed level. The measurement of altitude is called altimetry, which is related to the term bathymetry, the measurement of depth under water.

Altitude can be determined based on the measurement of atmospheric pressure. The greater the altitude the lower the pressure. When a barometer is supplied with a nonlinear calibration so as to indicate altitude, the instrument is called a pressure altimeter or barometric altimeter. A pressure altimeter is the altimeter found in most aircraft, and skydivers use wrist-mounted versions for similar purposes. Hikers and mountain climbers use wrist-mounted or hand-held altimeters, in addition to other navigational tools such as a map, magnetic compass, or GPS receiver.

The calibration of an altimeter follows the equation

where c is a constant, T is the absolute temperature, P is the pressure at altitude z, and Po is the pressure at sea level. The constant c depends on the acceleration of gravity and the molar mass of the air. However, one must be aware that this type of altimeter relies on "density altitude" and its readings can vary by hundreds of feet owing to a sudden change in air pressure, such as from a cold front, without any actual change in altitude.[2]

Use in hiking and climbing

A barometric altimeter, used along with a topographic map, can help to verify one's location. It is more reliable, and often more accurate, than a GPS receiver for measuring altitude; the GPS signal may be unavailable, for example, when one is deep in a canyon, or it may give wildly inaccurate altitudes when all available satellites are near the horizon. Because barometric pressure changes with the weather, hikers must periodically re-calibrate their altimeters when they reach a known altitude, such as a trail junction or peak marked on a topographical map.

An altimeter is the most important piece of skydiving equipment, after the parachute itself. Altitude awareness is crucial at all times during the jump, and determines the appropriate response to maintain safety.

Since altitude awareness is so important in skydiving, there is a wide variety of altimeter designs made specifically for use in the sport, and a non-student skydiver will typically use two or more altimeters in a single jump:[3]

The exact choice of altimeters depends heavily on the individual skydiver's preferences, experience level, primary disciplines, as well as the type of the jump.[4] On one end of the spectrum, a low-altitude demonstration jump with water landing and no free fall might waive the mandated use of altimeters and use none at all. In contrast, a jumper doing freeflying jumps and flying a high performance canopy might use a mechanical analogue altimeter for easy reference in free fall, an in-helmet audible for breakaway altitude warning, additionally programmed with swoop guide tones for canopy flying, as well as a digital altimeter on an armband for quickly glancing the precise altitude on approach. Another skydiver doing similar types of jumps might wear a digital altimeter for their primary visual one, preferring the direct altitude readout of a numeric display.

File:Drum-Altimeter.png
Schematic of a drum-type aircraft altimeter, showing the small Kollsman windows at the bottom left and bottom right of the face.

In aircraft, an aneroid barometer measures the atmospheric pressure from a static port outside the aircraft. Air pressure decreases with an increase of altitude—approximately 100 hectopascals per 800 meters or one inch of mercury per 1000 feet near sea level.

The aneroid altimeter is calibrated to show the pressure directly as an altitude above mean sea level, in accordance with a mathematical model defined by the International Standard Atmosphere (ISA). Older aircraft used a simple aneroid barometer where the needle made less than one revolution around the face from zero to full scale. This design evolved to altimeters with a primary needle and one or more secondary needles that show the number of revolutions, similar to a clock face. In other words, each needle points to a different digit of the current altitude measurement. However this design has fallen out of favor due to the risk of misreading in stressful situations. The design evolved further to drum-type altimeters, the final step in analogue instrumentation, where each revolution of a single needle accounted for 1,000 feet, with thousand foot increments recorded on a numerical odometer-type drum. To determine altitude, a pilot had first to read the drum to determine the thousands of feet, then look at the needle for the hundreds of feet. Modern analogue altimeters in transport aircraft are typically drum-type. The latest development in clarity is an Electronic flight instrument system with integrated digital altimeter displays. This technology has trickled down from airliners and military planes until it is now standard in many general aviation aircraft.

Modern aircraft use a "sensitive altimeter". On a sensitive altimeter, the sea-level reference pressure can be adjusted with a setting knob. The reference pressure, in inches of mercury in Canada and the United States, and hectopascals (previously millibars) elsewhere, is displayed in the small Kollsman window,[5] on the face of the aircraft altimeter. This is necessary, since sea level reference atmospheric pressure at a given location varies over time with temperature and the movement of pressure systems in the atmosphere.

In aviation terminology, the regional or local air pressure at mean sea level (MSL) is called the QNH or "altimeter setting", and the pressure that will calibrate the altimeter to show the height above ground at a given airfield is called the QFE of the field. An altimeter cannot, however, be adjusted for variations in air temperature. Differences in temperature from the ISA model will accordingly cause errors in indicated altitude.

In aerospace, the mechanical stand-alone altimeters which are based on diaphragm bellows were replaced by integrated measurement system which is called Air data computer (ADC). This module measures altitude, speed of flight and outside temperature to provide more precise output data allowing automatic flight control and Flight level division. Multiple altimeters can be used to design a Pressure Reference System to provide information about airplane's position angles to further support Inertial navigation system calculations.

Use in ground effect vehicle

After extensive research and experimentation, it has been shown that "phase radio-altimeters" are most suitable for ground effect vehicles, as compared to laser, isotropic or ultrasonic altimeters.[6]

In 1931, the US Army Air Corps and General Electric tested a sonic altimeter for aircraft, which was considered more reliable and accurate than one that relied on air pressure, when heavy fog or rain was present. The new altimeter used a series of high-pitched sounds like those made by a bat to measure the distance from the aircraft to the surface, which on return to the aircraft was converted to feet shown on a gauge inside the aircraft cockpit.[7]

A radar altimeter measures altitude more directly, using the time taken for a radio signal to reflect from the surface back to the aircraft. Alternatively, Frequency Modulated Continuous-wave radar can be used. The greater the frequency shift the further the distance traveled. This method can achieve much better accuracy than the pulsed radar for the same outlay and radar altimeters that use frequency modulation are industry standard. The radar altimeter is used to measure height above ground level during landing in commercial and military aircraft. Radar altimeters are also a component of terrain avoidance warning systems, warning the pilot if the aircraft is flying too low, or if there is rising terrain ahead. Radar altimeter technology is also used in terrain-following radar allowing fighter aircraft to fly at very low altitude.

Global Positioning System (GPS) receivers can also determine altitude by trilateration with four or more satellites. In aircraft, altitude determined using autonomous GPS is not reliable enough to supersede the pressure altimeter without using some method of augmentation. In hiking and climbing, it is not uncommon to find that the altitude measured by GPS is off by as much as 400 feet depending on satellite orientation.[8]

Other modes of transport

The altimeter is an instrument optional in off-road vehicles to aid in navigation. Some high-performance luxury cars that were never intended to leave paved roads, such as the Duesenberg in the 1930s, have also been equipped with altimeters.

Hikers and mountaineers use hand-held or wrist-mounted barometric altimeters, as do skydivers.

Diesel submarines have barometers installed on them to monitor vacuum being pulled in the event that the snorkel closes while the diesels are running and, as a consequence, sucking the air out of the boat.

File:Sealevel chart.jpg
This graph shows the rise in global sea level (in millimeters) measured by the NASA/CNES ocean altimeter mission TOPEX/Poseidon (on the left) and its follow-on mission Jason-1. Image credit: University of Colorado

Satellites such as Seasat and TOPEX/Poseidon use advanced dual-band radar altimeters to measure height from a spacecraft. That measurement, coupled with orbital elements (possibly augmented by GPS), enables determination of the terrain. The two different wavelengths of radio waves used permit the altimeter to automatically correct for varying delays in the ionosphere.

Spaceborne radar altimeters have proven to be superb tools for mapping ocean-surface topography, the hills and valleys of the sea surface. These instruments send a microwave pulse to the ocean's surface and record the time it takes to return. A microwave radiometer corrects any delay that may be caused by water vapor in the atmosphere. Other corrections are also required to account for the influence of electrons in the ionosphere and the dry air mass of the atmosphere. Combining these data with the precise location of the spacecraft makes it possible to determine sea-surface height to within a few centimeters (about one inch). The strength and shape of the returning signal also provides information on wind speed and the height of ocean waves. These data are used in ocean models to calculate the speed and direction of ocean currents and the amount and location of heat stored in the ocean, which in turn reveals global climate variations.