Aluminum wiring is a type of wiring used in houses, power grids, and airplanes. Aluminum provides a better conductivity to weight ratio than copper, and therefore is used in power wiring of some aircraft.[1][2]

Utility companies have used aluminum wire for electrical transmission in power grids since the early 1900s. It has cost and weight advantages over copper wires. Aluminum wire in transmission and distribution applications is still the preferred material today.[3] 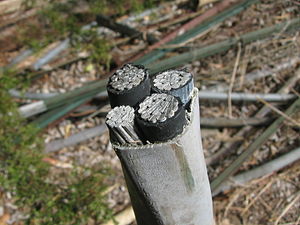 In the mid-1960s when the price of copper spiked, aluminum wire was manufactured in sizes small enough to use in homes. Aluminum wire requires a larger wire gauge than copper to carry the same current.

When first used in branch circuit wiring, aluminum wire was installed the same way as copper. Typical connections from electrical wire to electrical devices, also called terminals, are usually made by wrapping the wire around screw terminals and tightening the screw. Over time, many of these terminations to aluminum wire began to fail due to improper connection techniques and dissimilar metals having different resistances and different coefficients of thermal expansion. These connection failures generated heat under electrical load and caused overheated connections.

In the late 1960s, a device specification known as CU/AL was created that specified standards for devices intended for use with aluminum wire. Because of more rigorous testing, larger undercut screw terminals were designed to hold the wire more suitably. Unfortunately, CU/AL switches and receptacles failed to work well enough with aluminum wire, and a new specification called CO/ALR (meaning copper-aluminum, revised) was created. These devices employ screw terminals that have even deeper undercuts and are designed to act as a similar metal to aluminum and to expand at a similar rate. CO/ALR applies only to standard light switches and receptacles; CU/AL is the standard marking for circuit breakers and larger equipment.

The first 8000 series electric conductor alloy, still widely used in some applications, was developed and patented in 1972 by Aluminum Company of America (ALCOA).[4] This alloy, along with AA-8030 (patented by Olin in 1973) and AA-8176 (patented by Southwire in 1975 and 1980) perform mechanically like copper. Unlike the AA-1350 series, these 8000 series alloys retain their tensile strength after the standard current cycle test or the Current Cycle Submersion Test (CCST); both tests are described in ANSI C119.4:2004. Depending on the annealing grade, AA-8176 may elongate up to 30% with less springback effect and possesses a higher yield strength (19.8 KSI for a coldworked AA-8076 wire).[citation needed]

This alloy, when used with CO/ALR devices and aluminum-rated twist-on connectors, can be just as safe as copper wiring. However it is extremely rare in branch circuit wiring, and most twist-on connectors in typical branch-circuit sizes, even those designed to connect copper to aluminum wiring, are not rated for aluminum-to-aluminum connections (an exception is the Marette 63 and Marette 65). A home with aluminum wiring installed prior to 1972 probably has the older 1350 series alloy that was designed for power transmission. Due to their undesirable mechanical properties, most 1350 alloys were not suitable for branch wiring.

Aluminum wires have been implicated in house fires.[5][6] There are several possible reasons why these connections failed. The two main reasons were improper installation and the differences in the coefficient of expansion between aluminum wire used in the 1960s and the terminations.

Most metals (with a few exceptions, such as gold) oxidize freely when exposed to air. Aluminum oxide is not an electrical conductor, but rather an electrical insulator. Consequently, the flow of electrons through the oxide layer can be greatly impeded. However, since the oxide layer is only a few nanometers thick, the added resistance is not noticeable under most conditions. When aluminum wire is terminated properly, the mechanical connection breaks the thin, brittle layer of oxide to form an excellent electrical connection. Unless this connection is loosened, there is no way for oxygen to penetrate the connection point to form further oxide.

Coefficient of expansion and creep

Aluminum wire used before the mid-1970s has a coefficient of expansion that varies significantly from the metals common in devices, outlets, switches, and screws. Many terminations of aluminum wire installed in the 1960s and 1970s continue to operate with no problems. However, problems can develop in the future and some connections were not made properly when installed, including not wrapping wires around terminal screws and inadequate torque on the connection screws. There can also be problems with connections made with too much torque as it causes damage to the wire.

Aluminum and steel both expand and contract at different rates under thermal load, so a connection can become loose, and loose connections get progressively worse over time. This cycle results in the connection loosening slightly, overheating, and allowing intermetallic steel/aluminum alloying to occur between the conductor and the screw terminal. This results in a high-resistance junction, leading to additional overheating. Although many believe that oxidation was the issue, studies have shown[citation needed] that oxidation was not significant in these cases. The problems related to aluminum wire are typically associated with older pre-1970s solid wire smaller than No. 8 AWG, as the properties of that wire result in significantly more expansion and contraction than modern day AA-8000 series aluminum wire. Older solid aluminum wire also had problems with a property called creep, which made the wire permanently deform or relax over time under load. 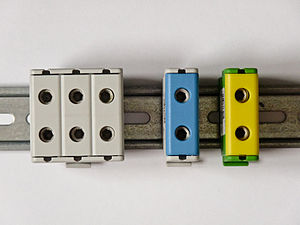 Another issue is the joining of aluminum wire to copper wire. As aluminum and copper are dissimilar metals, galvanic corrosion can occur in the presence of an electrolyte and these connections can become unstable over time.

In some states of the United States, home hazard insurance do not cover homes with any aluminum wiring, and some insurance companies that claim to cover it charge a higher premium than for homes with copper wiring.[citation needed]

File:Distribution board in USSR apartment building.JPG
Flat 81 is waiting to be upgraded from Soviet-era aluminum cable to modern copper cable.

COPALUM connectors use a special crimping system that creates a cold weld between the copper and aluminum wire, and is considered a permanent, maintenance-free repair. These connections are sometimes too large to install in existing enclosures. Surface enclosures or larger enclosures may be installed to remedy this problem. COPALUM connectors can be costly to install and require special tools and electricians certified to use them. It can be difficult to find local certified electricians and there can be limited space in existing enclosures for these connectors.

The AlumiConn miniature lug connector can also be used for a permanent repair.[8] The AlumiConn pigtail connectors only require the electrician to use a special torque screwdriver. These connectors may have the same problem with limited enclosure space as the COPALUM system.

Special twist-on connectors have been sold for joining aluminum to copper wire, which use a special antioxidant paste intended to prevent corrosion of the connection. CPSC considers the use of pigtails with wire nuts a temporary repair, and notes that "some pigtailing 'repairs' made with twist-on connectors may be prone to even more failures than the original aluminum wire connectors."[7] Ideal No. 65 "Twister" wire nuts, which are a distinctive purple color, are listed by UL for repairing aluminum wiring, but some researchers have criticized that UL listing. Ideal has stated that the Twister is intended for pigtailing leads of ceiling fans and light fixtures and is not intended for full retrofits.[9]

CO/ALR devices (switches and receptacles) should be used in place of older receptacles that did not have the proper rating, and they should be used to replace devices used in homes with aluminum branch circuit wiring. These devices are tested and listed for both AA-1350 and AA-8000 series aluminum wire, and are acceptable according to the National Electrical Code.[10]