From Infogalactic: the planetary knowledge core
Jump to: navigation, search
For other uses, see Amalfi (disambiguation).

Amalfi is a town and comune in the province of Salerno, in the region of Campania, Italy, on the Gulf of Salerno. It lies at the mouth of a deep ravine, at the foot of Monte Cerreto (1,315 metres, 4,314 feet), surrounded by dramatic cliffs and coastal scenery. The town of Amalfi was the capital of the maritime republic known as the Duchy of Amalfi, an important trading power in the Mediterranean between 839 and around 1200.

In the 1920s and 1930s, Amalfi was a popular holiday destination for the British upper class and aristocracy.

Amalfi is the main town of the coast on which it is located, named Costiera Amalfitana (Amalfi Coast), and is today an important tourist destination together with other towns on the same coast, such as Positano, Ravello and others. Amalfi is included in the UNESCO World Heritage Sites. 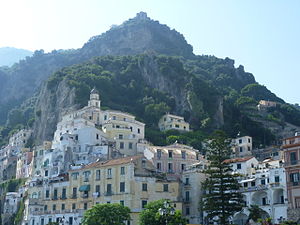 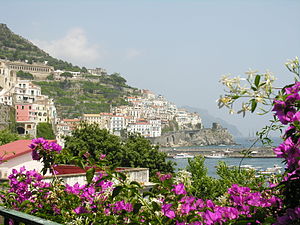 First mentioned in the 6th century, Amalfi soon afterwards acquired importance as a maritime power, trading grain from its neighbours, salt from Sardinia and slaves from the interior, and even timber, in exchange for the gold dinars minted in Egypt and Syria, in order to buy the Byzantine silks that it resold in the West. Grain-bearing Amalfi traders enjoyed privileged positions in the Islamic ports, Fernand Braudel notes. The Amalfi tables (it) provided a maritime code that was widely used by the Christian port cities. Merchants of Amalfi were using gold coins to purchase land in the 9th century, while most of Italy worked in a barter economy. In the 8th and 9th century, when Mediterranean trade revived it shared with Gaeta the Italian trade with the East, while Venice was in its infancy, and in 848 its fleet went to the assistance of Pope Leo IV against the Saracens.

An independent republic from the 7th century until 1075, Amalfi extracted itself from Byzantine vassalage in 839[1] and first elected a duke in 958; it rivalled Pisa and Genoa in its domestic prosperity and maritime importance before the rise of Venice. In spite of some devastating setbacks it had a population of some 70,000 to 80,000 reaching a peak about the turn of the millennium, during the reign of Duke Manso (966–1004).[2][3][4] Under his line of dukes, Amalfi remained independent, except for a brief period of Salernitan dependency under Guaimar IV.

In 1073 the republic fell to the Norman countship of Apulia, but was granted many rights. A prey to the Normans who encamped in the south of Italy, it became one of their principal posts. However, in 1131, it was reduced by King Roger II of Sicily, who had been refused the keys to its citadel. The Holy Roman Emperor Lothair, fighting in favour of Pope Innocent II against Roger, who sided with the Antipope Anacletus, took him prisoner in 1133, assisted by forty-six Pisan ships. The Pisans, commercial rivals of the Amalfitani, sacked the city; Lothair claimed as part of the booty a copy of the Pandects of Justinian which was found there.

In 1135 and 1137, it was taken by the Pisans and rapidly declined in importance, though its maritime code, known as the it, was recognized in the Mediterranean until 1570. A tsunami in 1343 destroyed the port and lower town,[5] and Amalfi never recovered to anything more than local importance.

In medieval culture Amalfi was famous for its flourishing schools of law and mathematics. Flavio Gioia, traditionally considered the first to introduce the mariner's compass to Europe, is said to have been a native of Amalfi.

Amalfi has a long history of catering for visitors, with two former monasteries being converted to hotels at a relatively early date, the Luna Convento in the second decade of the 19th century and the Cappuccini Convento in the 1880s. Celebrated visitors to Amalfi included the composer Richard Wagner and the playwright Henrik Ibsen, both of whom completed works whilst staying in Amalfi.

Amalfi occupied a high position in medieval architecture; its cathedral of Sant'Andrea (Saint Andrew, 11th century), the campanile, the convent of the Cappuccini, founded by the Amalfitan Cardinal Pietro Capuano, richly represent the artistic movement prevailing in Southern Italy at the time of the Normans, with its tendency to blend the Byzantine style with the forms and sharp lines of the northern architecture.

At the top of a staircase, Saint Andrew's Cathedral (Duomo) overlooks the Piazza Duomo, the heart of Amalfi. The cathedral dates back to the 11th century; its interior is adorned in the late Baroque style with a nave and two aisles divided by 20 columns. The façade of the cathedral is Byzantine in style and is adorned with various paintings of saints, including a large fresco of Saint Andrew.

The gold caisson ceiling has four large paintings by Andrea dell'Asta. They depict the flagellation of Saint Andrew, the miracle of Manna, the crucifixion of Saint Andrew and the Saint on the cross. From the left hand nave there is a flight of stairs which leads to the crypt. These stairs were built in 1203 for Cardinal Pietro Capuano, who, on 18 May 1208, brought Saint Andrew's remains to the cathedral from Constantinople.

The bronze statue of Saint Andrew in the cathedral was sculpted by Michelangelo Naccherino, a pupil of Michelangelo; also present are Pietro Bernini marble sculptures of St. Stephen and St. Lawrence.

In 1206, Saint Andrew's relics were brought to Amalfi from Constantinople by the Pietro Capuano following the Sack of Constantinople (an event of the 4th Crusade) after the completion of the town's cathedral.[6] The cathedral contains a tomb in its crypt that it maintains still holds a portion of the relics of the apostle. A golden reliquary which originally housed his skull and another one used for processions through Amalfi on holy days can also be seen.

The Chiostro del Paradiso ("Cloister of Paradise") was built by Filippo Augustariccio between 1266 and 1268 and was used as a burial ground for noble families of Amalfi. The white columns and pointed arches reflect the clear influence that the Arab world had on Amalfi, similar to those found in the courts of the palaces of the Middle East.[7] It is a true open-air museum, with Roman and medieval pillars, sarcophagi depicting the wedding of Peleus and Thetis, the other the rape of Proserpina, a fourteenth-century sarcophagus and fragments of the façade of the Duomo.

The structure of the arsenal consists of two large stone-built halls with vaulting supported by repeated pointed arches. The vaulting rests on ten piers, originally there were twenty two, the missing twelve and the structure they supported having been lost to centuries of coastal erosion. The main function of the arsenal was the building, repair and storage of warships. Amalfitan war-galleys were among the largest to be found in the Mediterranean during the Early Middle Ages. The building now contains architectural and sculptural remains, a row-barge used in the Historical Regatta, a number of models of ships and it also acts as a venue for visual art exhibitions. Starting from December 2010, the Ancient Arsenals of Amalfi host the Compass Museum on the premises of the two aisles of the building, which were spared by the Amalfi seaquake of 1343.[8] 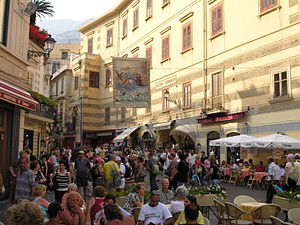 The Museum of Handmade Paper, located in Mill Valley in the northern part of the modern town, celebrates the long-established paper making tradition in Amalfi. The town was one of the first centres of paper making in Europe, the skill having been acquired by the Amalfitans from the Arabs. The museum is housed in an ancient paper mill which was once owned by the Milano family, a family famous in Amalfi for its involvement in the production and manufacture of paper. In 1969 the building was converted into a museum as a result of the will of Nicholas Milano, the mill's then owner. The museum contains the machinery and equipment (restored and fully functional) that was once used to manufacture paper by hand.

The Amalfi coast is famed for its production of Limoncello liqueur and the area is a known cultivator of lemons. The correct name is "sfusato amalfitano", and they are typically long and at least double the size of other lemons, with a thick and wrinkled skin and a sweet and juicy flesh without many pips. It is common to see lemons growing in the terraced gardens along the entire Amalfi coast between February and October. Amalfi is also a known maker of a hand-made thick paper which is called "it". It is exported to many European countries and to America and has been used throughout Italy for wedding invitations, visiting cards and elegant writing paper. The paper has a high quality and has been used by artists such as Giuseppe Leone, who described it: "There is a whole world that the Amalfi paper evokes and an artist who is sensitive to the suggestion of these places is aware that it is unique and exciting".

Three traditional events draw numerous visitors to Amalfi. First are the feast days of Saint Andrew (25–27 June, and 30 November), celebrating the city's patron saint. Then there is "Byzantine New Year's Eve" (31 August) celebrating the beginning of the New Year according to the old civil calendar of the Byzantine Empire.[9] The third event is the Historical Regata (first Sunday in June), a traditional rowing competition among the four main Italian historical maritime republics: Amalfi, Genoa, Pisa and Venice. This event is hosted by a different city every year, so it comes to Amalfi once every four years.

Panoramic view of the town of Amalfi, with the Amalfi Cathedral in the centre.

The nearest airports are: