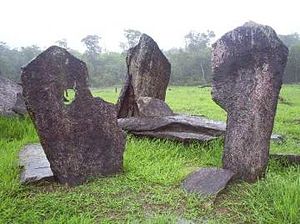 Detail of Cromlech of Calcoene 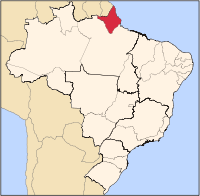 Amapá state, Brazil. The Amazon Stonehenge is located north of Calçoene, 390 kilometres (240 mi) from Macapá, the capital of Amapá state.[1][2]

A megalithic stone circle colloquially known as the Amazon Stonehenge (referred to in academic sources as AP-CA-18) is located in Amapa state, Brazil, near the city of Calçoene. It consists of 127 blocks of granite, each up to 4 meters tall, standing upright in a circle measuring over 30 meters in diameter at the bank of the Rego Grande river on a hilltop. Archaeologists believe that this site was built by indigenous peoples for astronomical, ceremonial, or burial purposes, and likely a combination. The function of this megalithic site is unknown, much like other sites such as Stonehenge, a much older site in Great Britain.

The first reports of Amazon Stonehenge are from naturalist Emilio Goeldi in the late 19th century. Locals have called the site "Tropical Stonehenge" for some time. In 2005, archaeologists began excavation of the site after it was reported by a geologist during a socioeconomic study.

Though the stones have not been submitted to dating techniques, carbon-dating of pottery sherds has placed the site at 500 – 2000 years old. The origin of these granite blocks has yet to be studied as well. In certain Megalithic sites, such as Stonehenge in Wiltshire, England, the blocks were moved to the site from some distance away. Archaeologists are not yet sure whether Amazon Stonehenge follows this pattern.

On the winter solstice of December 21, the shortest day of the year in the northern hemisphere, the shadow of one of the blocks disappears when the sun is directly above it.[3] The rock seems to be placed at angle so that the shadow is possibly small throughout the day.[4] It is this block's alignment with the December solstice that leads archaeologists to believe the site was once a type of astronomical observatory. They believe the site was made by a sophisticated indigenous culture.[3] One of the stones has a circular hole carved into it. During the winter solstice, the sun shines directly though this hole onto another rock for an extended amount of time,[citation needed] supporting the idea that Amazon Stonehenge was used as an astronomical site.

The granite stones that make up Amazon Stonehenge are rough and unworked.[citation needed]

Evidence has been found near Amazon Stonehenge and all over the Amazon to suggest that the indigenous people of the region lived in a complex societies that involved both agriculture and a close relationship with the natural environment around them.

There are also several other megalithic sites in Brazil that follow the curves of the Rego Grande river. The fact that these Megalithic sites seem to follow such a pattern suggests that Amazon Stonehenge may have been used as either a ceremonial site and that its structure and cultural significance were shared amount different indigenous communities in pre-Columbian Brazil.

Despite not knowing the exact use of Amazon Stonehenge, most scientist agree that it alludes to a pre-Columbian society that was much more complex than previously thought.