Ambras Castle (German: Schloss Ambras Innsbruck) is a Renaissance castle and palace located in the hills above Innsbruck, Austria. Ambras Castle is situated at an elevation of 587 meters.[1] Considered one of the most popular tourist attractions of the Tyrol, Ambras Castle was built in the sixteenth century on the spot of an earlier tenth-century castle, which became the seat of power for the Counts of Andechs. The cultural and historical importance of the castle is closely connected with Archduke Ferdinand II (1529–1595) and served as his residence from 1563 to 1595.[2] Ferdinand was one of history’s most prominent collectors of art. The princely sovereign of Tyrol, son of Emperor Ferdinand I, ordered that the mediaeval fortress at Ambras be turned into a Renaissance castle as a gift for his wife Philippine Welser. The cultured humanist from the House of Habsburg accommodated his world-famous collections in a museum built specifically for that purpose, making Castle Ambras Innsbruck the oldest museum in the world.

The Lower Castle contains armouries feature masterpieces of the European armourer’s art from the time of Emperor Maximilian I to Emperor Leopold I. As the only Renaissance Kunstkammer of its kind to have been preserved at its original location, the "Kunst- und Wunderkammer" (Chamber of Art and Curiosities) represents an unrivalled cultural monument.

Above the Lower Castle is the famous Spanish Hall (Spanische Saal), a notable example of German Renaissance architecture, which contains an intricate wood-inlay ceiling and walls adorned with 27 full-length portraits of the rulers of Tyrol.[3] The Upper Castle contains an extensive portrait gallery featuring paintings of numerous members of the House of Habsburg.[4]

Long before Innsbruck became a city, references to an Amras or Omras appeared in documents dating from the tenth century. This early fortification in what was then the southwest corner of Bavaria was the seat of power of the Counts of Andechs, who became Margraves of Istria and later Dukes of the short-lived Imperial State of Merania from 1180 to 1248. This original fortification was destroyed in 1133 and no traces of it remain, although some of the material from the original structure was later used in the modern building.[2] In 1248, the castle ruins and property passed by inheritance from the Counts of Andechs to Count Albert IV of Tyrol.

The modern Ambras Castle was built by Archduke Ferdinand II (1529–1595), the second son of Emperor Ferdinand I. When he was made provincial sovereign of Tyrol in 1563, Ferdinand II ordered two Italian architects to turn the existing medieval fortress into a Renaissance castle for his untitled wife Philippine Welser (1527–1580), whom he had married in secret.[2][Note 1] Ferdinand II prepared his residence in the Upper Castle, beneath which he constructed one of the most artistically important halls of the late Renaissance—known as the Spanish Hall since the nineteenth century. In 1589, he added an additional building west of the Lower Castle for the purpose of housing his collection of weaponry. Ambras Castle was used as the official residence of Philippine as well as a place for Ferdinand II to house his collection of weapons, suits of armour, portraits, natural objects, as well as rarities and precious objects.[2]

Philippine became a popular and beloved figure through her charity and willingness to help others, particularly the common people of Tyrol. Even the nobility brought their petitions to the former commoner. As signs of affection, people addressed their written petitions to "Merciful Miss" or "serene Princess Mrs. Philippine of Austria".[2] After Ferdinand's death in 1595, the second son of Ferdinand and Philippine, Margrave Charles of Burgau, inherited Ambras Castle. With little interest in the castle, and never having used it as a residence, Charles sold it in 1606 to Emperor Rudolf II.[2]

In the following years, Ambras Castle no longer had the status of an official residence and was seldom lived in. Inadequate preservation measures led to the loss of valuable books, manuscripts, and hand sketches, and soon the palace fell largely into disrepair. In the seventeenth century, Emperor Leopold I (1640–1705) had some of the most valuable holdings of the Ambras collections—mostly books and manuscripts—moved to Vienna, where they can still be seen at the Austrian National Library.[2] In 1805, the remaining Ambras collections were threatened by the defeat of Austria by the French Empire. Fortunately, after recognized the private-law character of the Ambras collection, Napoleon (1769–1821) had it brought to safety in Vienna.[2]

In 1855, Archduke Karl Ludwig, then governor of Tyrol, had the palace remodeled to use as a summer residence. Significant changes were made during this time to the palace and the surrounding park. The Outer Bailey (Vorschloss) was constructed with an ivy-clad entrance ramp for carriages. The park was redesigned as an English garden. Following Archduke Karl Ludwig's renouncement of his succession rights in 1889,[Note 2] the palace fell once again into ruinous condition. In 1880, it was converted into a museum and subsequently renovated.[2]

In 1919, following the dissolution of the Austria-Hungary Empire, Ambras Castle became the property of the Republic of Austria. In 1950, the Kunsthistorisches Museum took over the administration of the castle and its collections. Throughout the 1970s, a comprehensive restoration took place of the Spanish Hall, the Upper Castle residential quarters, and the inner courtyard. In 1974, the Chamber of Art and Curiosities was completed. In 1976, the Portrait Gallery covering the fifteenth to nineteenth centuries was completed. In 1981, the Armoury was reopened in the Lower Castle.[2] 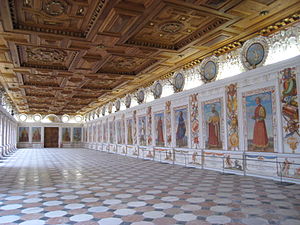 Ferdinand II was one of the most important patrons of the Habsburg family. He founded the notable collections of Ambras and had a museum built for them in the rooms of the "Lower Castle", which was constructed according to the most advanced ideas of his time. The three armouries and the chamber of art and curiosities were designed and used as a museum from the beginning.

The Spanish Hall, built between 1569-1572, is one of the most important freestanding halls of the Renaissance. The picturesque lay-out of the 43 m long hall is dominated by the 27 full-length portraits of the princely rulers of the Tyrol. Today rather famous classical concerts take place in this hall.

Chamber of Art and Curiosities

The Chamber of Art and Curiosities of Archduke Ferdinand II is the only one which can still be seen in its original place. Others had been plundered like the ones in Munich, Prague or Stuttgart, or their character had been changed like in Dresden or Kassel.

In the chamber of art and curiosities at Ambras Castle wonders as well as precious objects, scientific items or toys are to be seen. In contents the natural and artistic objects represent the programme of the late Renaissance encyclopedic collections. The special thing about the Ambras-collections is, that they are still where they were meant to be seen. Still you can find corals arranged in cabinet-boxes, turnery made of wood or ivory, glass figures, or porcelain and silk paintings which belong to the oldest European collections of Asian art.

Also important works of European artists, like the carved "little death" made of wood by Hans Leinberger can be found, as well as typical "chamber of art and curiosity – objects" like handstones, goblets made of rhinoceros horn, coconut or rock crystal, animals made of bronze, music- and measuring instruments, automats and clocks. A very important part of the collection were portraits of curious persons like the hairy people, Vlad Dracula and others. 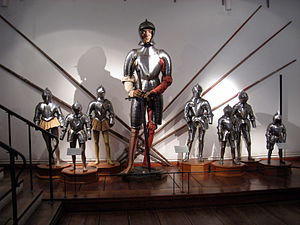 Ferdinand was mostly interested in his armouries. The "Rüstkammer" contain very rare examples of armour from the 15th century which originally came from the collections of Emperor Maximilian I and Archduke Sigismund. Armour for tournaments like the German joust or the German course, and the armour of the court's giant Bartlmä Bon, who took part in the tournament in Vienna in 1560, can be seen. The "Heldenrüstkammer" displays armour of famous commanders in original 16th century showcases. The "Leibrüstkammer" includes the archduke's private armour and the armour of the court of Innsbruck.

The Upper Castle, the oldest part of Ambras Castle, contains the "Habsburg Portrait Gallery". About 300 portraits from the 15th to the 19th century, including King Albrecht II, Emperor Maximilian I, Charles V and Ferdinand I, to the last emperor of the Holy Roman Empire, Franz II, a contemporary of Napoleon Bonaparte. Because of the various dynastic relations, the collection also shows members of other European dynasties. The portraits were painted by well known artists such as Lucas Cranach the Elder, Antonis Mor, Titian, Anthony van Dyck and Diego Velázquez.

The inner courtyard is embellished with frescoes executed as grisaille mural paintings. In cultural historical terms the Bathing Chamber of Philippine Welser is something of a rarity. The Chapel is dedicated to St. Nicholas. The Strasser Collection of Glass boasts precious glassware from the Renaissance and Baroque periods.

The Ambras Castle is so popular and famous, that was the topic of one of the most famous silver collectors coins: the 10 euro Ambras Castle coin.

In one side of the coin there is a general view of the castle to the south of Innsbruck with its Renaissance style gardens forms the central design. On the other side, three court musicians cross the floor of the Spanish Hall, based on a picture from 1569. This design recalls the court festivals for which Fedinand II had the Spanish Hall specially constructed.