Amedeo Nazzari (10 December 1907, in Cagliari – 6 November 1979) was an Italian actor. Nazzari was one of the leading figures of Italian classic cinema, often considered a local variant of the Australian-American star Errol Flynn. Although he emerged as a star during the Fascist era, Nazzari's popularity continued well into the post-war years.

Amedeo Nazzari was born as Salvatore Amedeo Buffa in Cagliari, Sardinia in 1907 and he later adopted as his professional name the name of his maternal grandfather, Amedeo Nazzari, a person who had been the President of the Court of Appeal of Vicenza in Venetia and later took the same position in Cagliari. Although Salvatore Amedeo eventually moved to Rome, he always retained a slight trace of his native Sardinian accent.[1] While Nazzari was keen on gaining film contracts much of his early experience was in the theatre. He entered a contest organised by Twentieth Century Fox to find an Italian actor to fill the boots of the recently deceased screen star Rudolph Valentino, but lost out to Alberto Rabagliati.[2] He was rejected after screen tests by Italian professionals, who found him too tall, thin and thought he had a too gloomy expression.[3]

Nazzari made his debut in Ginevra degli Almieri (1935), following a recommendation from Elsa Merlini.[4] His first read role came with the 1936 film Cavalry, and he followed it up with The Castiglioni Brothers (1937). His breakthrough came with the 1938 film Luciano Serra, Pilot (1938) where he played a First World War veteran who returns to fight for Italy during the Abyssinian War. Nazzari was transformed into a matinee idol, the most bankable star of Italian cinema.[5] Following the film, Nazzari was invited to join the Fascist Party by Benito Mussolini, but declined saying "Thank You Duce! I would prefer not to concern myself with politics, occupied as I am with more pressing artistic commitments".[6]

Despite declining to join the party Nazzari, along with a handful of other actor such as Fosco Giachetti, was considered the model of a Male Hero. Most of his film roles from this point present him as a masculine (often military) figure. His emergence as a star coincided with a major drive by the Italian government to rebuild the country's film industry which had declined since its heyday in the silent era.

This policy involved large-scale government funding of films and the construction of the massive Cinecittà studio complex in Rome. The number of films produced each year climbed rapidly, with Nazarri a particularly prolific actor (making six films in 1939 and eight in 1941).[7] During the era he appeared opposite most of the leading Italian actresses including Alida Valli, Lilia Silvi, Luisa Ferida, Mariella Lotti, Assia Noris, Vera Carmi and Clara Calamai, often more than once.

Nazzari was almost always cast as a straightforward hero, and he closely protected his public persona to avoid any negative roles. An exception was the historical comedy-drama film The Jester's Supper (1942) in which he plays a loutish figure. Nazzari made four films with Alida Valli, including Unjustified Absence (1939).

Following Italy's entry into the Second World War in 1940, he combined romances and comedies, with occasional more propagandistic productions. Amongst the more political was Bengasi (1942), an anti-British war film set in Libya. Nazzari portrays an Italian patriot who masquerades as a collaborator with the British occupiers of Bengazi in order to steal their battle plans. It was the only time he featured alongside the other great male star of the era, Fosco Giachetti. 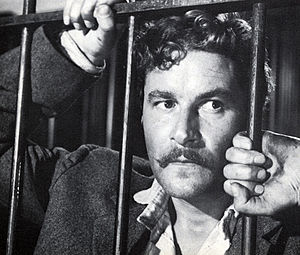 Star of Italian cinema during the 40's and 50's. He made several melodramas with Raffaello Matarazzo, such as Catene in 1949. Nazzari acts himself in Federico Fellini's Nights of Cabiria.