American Board of Commissioners for Foreign Missions 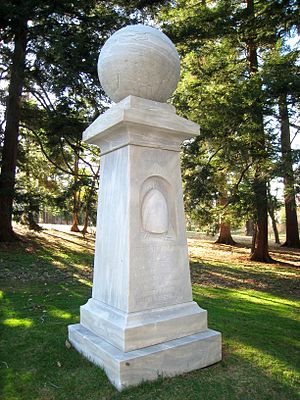 The Haystack Monument, Williams College, commemorates the event in 1806 that inspired the creation of the ABCFM.

In 1961 the ABCFM or the American Board, as it was often called, merged with other societies to form the United Church Board for World Ministries, an agency of the United Church of Christ. Other organizations that draw inspiration from the ABCFM include InterVarsity Christian Fellowship, the Conservative Congregational Christian Conference, and the Missionary Society of the National Association of Congregational Christian Churches. 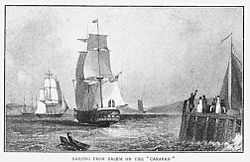 The Judsons, Newells, and Luther Rice set sail for India from Salem, Massachusetts on the Caravan on February 19, 1812.

The founding of the ABCFM was inspired by the Second Great Awakening. In 1806, five students from Williams College in western Massachusetts took shelter from a thunderstorm in a haystack. At the Haystack Prayer Meeting, they came to the common conviction that "the field is the world" and inspired the creation of the ABCFM four years later. The objective of the ABCFM was to spread Christianity worldwide.[1] Congregationalist in origin, the ABCFM also accepted missionaries from Presbyterian (1812–70), Dutch-Reformed (1819–57) and other denominations.

The fight against Indian removal

Evarts led the organization's efforts to place missionaries with American Indian tribes in the Southeastern United States. He also led the ABCFM's extensive fight against Indian removal policies in general and the Indian Removal Act of 1830 in particular.[3]

By the 1830s, based on its experiences, the ABCFM prohibited unmarried people from entering the mission field. They required couples to have been engaged at least two months prior to setting sail. To help the missionaries find wives, they maintained a list of women who were "missionary-minded": "young, pious, educated, fit and reasonably good-looking."[4] The secretary post was offered to Elias Cornelius in October 1831, but he became ill and died in February 1832.[5] Rufus Anderson was the General Secretary of the Board from 1832 through the mid-1860s. His legacy included administrative gifts, setting of policy, visiting around the world, and chronicling the work of the ABCFM in books. 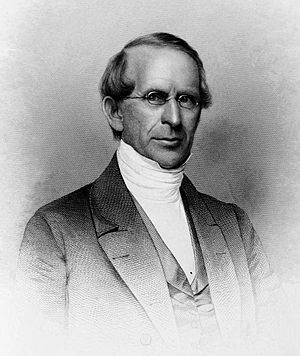 Between 1810 and 1840, the ABCFM sought firstly to proclaim the Gospel of Jesus Christ. At home and abroad, the Board and its supporters undertook every effort to exhort the evangelical community, to train a cadre of agents, and to send forth laborers into the mission field. As a leader in the United Front and early federal American voluntary associations, the Board influenced the nineteenth-century mission movement.[6]

By 1850, the American Board had sent 157 ordained, male missionaries to foreign posts.[7]

Orthodox, Trinitarian and evangelical in their theology, speakers to the annual meetings of the Board challenged their audiences to give of their time, talent and treasure in moving forward the global project of spreading Christianity. At first reflective of late colonial "occasional" sermons, the annual meeting addresses gradually took on the quality of "anniversary" sermons. The optimism and cooperation of post-millennialism held a major place in the scheme of the Board sermons.

After having listened to such sermons and been influenced at colleges, college and seminary students prepared to proclaim the gospel in foreign cultures. Their short dissertations and pre-departure sermons reflected both the outlook of annual Board sermons and sensitivity to host cultures. Once the missionaries entered the field, optimism remained yet was tempered by the realities of pioneering mission work in a different milieu. Many of the Board agents sought—through eclectic dialogue and opportunities as they presented themselves, as well as itinerant preaching—to bring the cultures they met, observed, and lived in to bear upon the message they shared. The missionaries found the audiences to be similar to Americans in their responses to the gospel message. Some rejected it outright, others accepted it, and a few became Christian proclaimers themselves.

Other North American Missions to the Indians

Missionaries of the Dakota mission experienced the explosion of Dakota violence in August 1862 at the start of the U.S.-Dakota War. Some of them attended the imprisoned Dakota and accompanied the exiled Dakota when they were forced out of Minnesota in 1863, especially those of the Williamson and Riggs families.

Indigenous preachers associated with the Board proclaimed an orthodox message, but they further modified the presentation beyond how the missionaries had developed subtle differences with the home leaders. Drawing upon the positive and negative aspects of their own cultures, the native evangelists steeped their messages in Biblical texts and themes. At times, indigenous workers had spectacular or unexpected results. On many occasions, little fruit resulted from their labors. Whatever the response, the native preachers worked on—even in the midst of persecution—until martyrdom or natural death took them.

Native preachers and other indigenous people assisted Board missionaries in Bible translation efforts. The act of translating the Scriptures into a mother tongue reflected a sensitivity to culture and a desire to work within the host society. Second only to the verbal proclamation of the Gospel, Bible translation took place in all sorts of settings: among ancient Christian churches, such as the Armenians and the Assyrian [Nestorian] church; cultures with a written language and a written religious heritage, such as the Marathi; and creating written languages in cultures without them, such as among the animistic people in Hawaii.

Printing and literacy played crucial roles in the process of Bible translation. Similarly, the press runs and literacy presentations contributed significantly to the social involvement exhibited by the Board. To a greater or lesser extent, education, medicine, and social concerns supplemented the preaching efforts by missionaries. Schools provided ready-made audiences for preachers. Free, or Lancasterian, schools provided numerous students. Boarding students in missionary homes allowed them to witness Christian life in the intimacy of the family.

Education empowered indigenous people. Mostly later than 1840, it enabled them to develop their own church leaders and take a greater role in their communities. Board missionaries established some form of education at every station. A number of Board missionaries also received some medical training before leaving for the field. Some, like Ida Scudder, were trained as physicians but ordained as missionaries and concentrated on the task of preaching. Others, such as Peter Parker, sought to practice both the callings of missionary and medical practitioner.

After the London Missionary Society and the Netherlands Missionary Society, the Americans were the next to venture into the mission field of China. The Board of Commissioners for Foreign Missions, representing the Congregational Churches of the United States, sent out Revs. David Abeel and Elijah Coleman Bridgman in 1829. They were received in February 1830 by Dr. Robert Morrison. These men worked first among the Chinese and Malays of the Straits Settlements. From 1842 to his death in 1846, Mr. Abeel devoted himself to establishing a mission in Amoy (modern Xiamen). 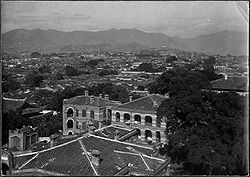 The American Board followed with many other appointments in rapid succession. Revs. Ira Tracy and Samuel Wells Williams (1812–1884), followed in 1833, settling at Singapore and Macau. In the same year Revs. Stephen Johnson (missionary) and Samuel Munson went to Bangkok and Sumatra. There were four great centers from which smaller stations were maintained. These were Fuzhou, in connection with which were fifteen churches; North China, embracing Beijing, Kalgan, Tianjin, Tengzhou, and Baoding, with smaller stations in the various districts of the center missions; Hong Kong; and Shanxi, with two stations in the midst of districts filled with opium cultivation and staffed by missionaries of the Oberlin Band of Oberlin College.

At Tengzhou missionaries established a college, over which Dr. Calvin Mateer presided. Tengzhou was one of the centers for Chinese literary competitive examinations. Mateer believed that the light of modern science shown in contrast with "superstition" would prove effective. He and his wife taught astronomy, mathematics, natural philosophy, and history. He trained young men to be teachers all over North China. The young men whom he had trained in Biblical instruction began native ministry. Drs. John Livingstone Nevius and Hunter Corbett (1862–1918) co-operated in this latter work, by giving a theological education to candidates for ministry during a portion of each year at Yantai.

At its principal stations in China, the Society maintained large medical dispensaries and hospitals, boarding schools for boys and girls, colleges for native students, and other agencies for effecting the purposes of the mission. As of 1890 it had twenty-eight missionaries, sixteen lady agents, ten medical missionaries, four ordained native ministers, one hundred and five unordained native helpers, nearly one thousand communicants, and four hundred and fifty pupils in its schools.[8]

ABCFM in the Middle East

The ABCFM founded many colleges and schools in the Ottoman Empire and the Balkans.[9]

Indigenous workers affiliated with the Board

6. See Putney, Clifford (writer of introduction and editor with Burlin, Paul), The Role of the American Board in the World: Bicentennial Reflections on the Organization's Missionary Work, 1810–2010 (Eugene, Or: Wipf and Stock, 2012)https://wipfandstock.com/store/The_Role_of_the_American_Board_in_the_World_Bicentennial_Reflections_on_the_Organizations_Missionary_Work_18102010