The American Bridge Company is a civil engineering firm that specializes in building and renovating bridges and other large civil engineering projects. Founded in 1900, the company is headquartered in Coraopolis, Pennsylvania, a suburb of Pittsburgh.

The firm has built many bridges in the U.S. and elsewhere; the Historic American Engineering Record notes at least 81.[1] American Bridge has also built or helped build the Willis Tower, the Empire State Building, the Chrysler Building, launch pads, resorts, and more. During World War II, it produced tank landing ships (LSTs) for the United States Navy.

The Eads Bridge on the Mississippi River, the first major bridge built primarily of steel, was constructed by one of American Bridge Co.'s antecedents in 1874.

American Bridge Company was founded in April 1900, when JP Morgan led a consolidation of 28 of the largest U.S. steel fabricators and constructors. The company’s roots extend to the late 1860s, when one of the consolidated firms, Keystone Bridge Company, built the Eads Bridge at St. Louis, the first steel bridge over the Mississippi River and still in use. In 1902, the company became a subsidiary of United States Steel as part of the Steel Trust consolidation.

The company pioneered the use of steel as a construction material; developing the means and methods for fabrication and construction that allowed it to be widely used in buildings, bridges, vessels, and other plate applications.[citation needed] It went on to do work across the nation and around the world.

During World War II, the company built warships for the U.S. Navy. In 1944, American painter Thomas Hart Benton recorded the construction and launch of LST 768, producing numerous drawings and a painting, Cut the Line.[2]

The company went private in 1987 and was sold to Continental Engineering Corporation in 1988.[3]

The town of Ambridge, Pennsylvania, was an American Bridge company town (thus the name "Ambridge"), and is near their current headquarters of Coraopolis, Pennsylvania. Both municipalities are on the Ohio River near Pittsburgh, with access to many steel suppliers, as well as to waterborne and rail transport, to allow shipment of components and subassemblies. 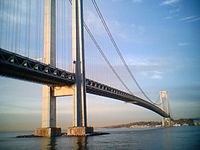