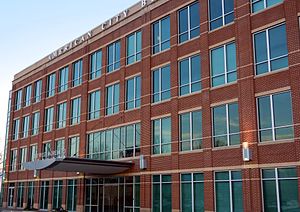 American City Business Journals is an American newspaper chain based in Charlotte, North Carolina, owned by Advance Publications. It has a range of media including 40 primary metropolitan weekly publications, which reach 4 million readers with business community related news, and The Business Journals, which has daily news from those newspapers and other business news and information. It also controls the Street & Smith's Sports Group, which publishes motorsports periodicals, including SportsBusiness Journal, Sports Business Daily, five sports annuals, and The Sporting News. The company is the United States' leading publisher of NASCAR magazines, which includes NASCAR Illustrated and Scenedaily.com.

American City also publishes specialty publications, which include a high-tech business newspaper, a law journal, and Hemmings Motor News. In 2009, ACBJ took over management of Portfolio.com, a website formerly associated with the now-defunct Condé Nast Portfolio.[2]

Mike Russell founded American City Business Journals. The President and CEO of American City is Whitney Shaw. Shaw was previously senior vice president of ACBJ and president of its sports-publishing division. He succeeds his father, Ray Shaw, who was chairman and CEO of ACBJ for 25 years. Ray Shaw, the company's chairman from 1989 until his 2009 death, bought a controlling interest along with a partner in 1989, selling to Advance Publications in 1995. It was Russell who suggested Shaw buy the entire company rather than just a few journals. Under Ray Shaw's leadership, the company moved from Kansas City, Missouri, to Charlotte, North Carolina, and greatly increased the number of its publications.[3]

The Business Journals is the online media division of American City Business Journals which operates websites for each of the company's 40 print business journals as well as its first web-only local business news and information site for Los Angeles, California.

The site contains local business news from around the nation, updated throughout the day, along with an archive that contains more than 2 million business news articles published since 1996. The Business Journals' sites have more than four million unique visitors each month.

The Business Journal's Forty Under 40 is an annual list compiled and published by the Business Journal newspapers since 1992.[13][14] The purpose is to list the 40 most successful entrepreneurs under the age of 40. The 40 are usually nominated from within individual areas in range of the local business journal's publication.