The American Expeditionary Forces (AEF) consisted of the United States Armed Forces sent to Europe under the command of General John J. Pershing in 1917 to help fight World War I . During the United States campaigns in World War I the AEF fought in France alongside French and British allied forces in the last year of the war, against German forces. Some of the troops fought alongside Italian forces in that same year, against Austro-Hungarian forces. The AEF helped the French Army on the Western Front during the Aisne Offensive (at Château-Thierry and Belleau Wood) in June 1918, and fought its major actions in the Saint-Mihiel and Meuse-Argonne Offensives in late 1918. 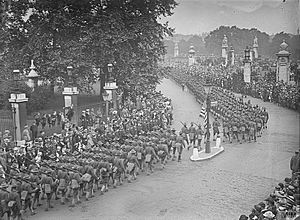 U.S. President Woodrow Wilson initially planned to give command of the AEF to General Frederick Funston, but after Funston's sudden death, Wilson appointed Major General John J. "Black Jack" Pershing in May 1917; Pershing remained in command for the entire war. Pershing insisted that American soldiers be well-trained before going to Europe. As a result, few troops arrived before 1918. In addition, Pershing insisted that the American force would not be used merely to fill gaps in the French and British armies, and he resisted European efforts to have U.S. troops deployed as individual replacements in decimated Allied units. This attitude was not always well received by the Allied leaders who distrusted the potential of an army lacking experience in large-scale warfare.[1] In addition the British tried to barter their spare shipping to make the US put its soldiers into British ranks. 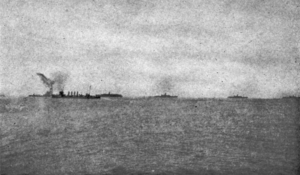 With America's first convoy. The troop ships are the Henderson, Antilles, Momus and Lenape.

By June 1917, only 14,000 U.S. soldiers had arrived in France and the AEF had only a minor participation at the front in late October 1917, but by May 1918 over one million U.S. troops were stationed in France; but only half of which made it to the front lines.[2] Since the transport ships needed to bring American troops to Europe were scarce at the beginning, the army pressed into service passenger liners, seized German ships, and borrowed Allied ships to transport American soldiers from New York, New Jersey, and Newport News, Virginia. The mobilization effort taxed the American military to the limit and required new organizational strategies and command structures to transport great numbers of troops and supplies quickly and efficiently. The French harbors of Bordeaux, La Pallice, Saint Nazaire and Brest became the entry points into the French railway system which brought the US forces and their supplies to the front. American engineers in France built 82 new ship berths, nearly 1,000 miles (1,600 km) of additional standard-gauge tracks and 100,000 miles (160,000 km) of telephone and telegraph lines.[1]

The first American troops, who were often called "Doughboys", landed in Europe in June 1917. However the AEF did not participate at the front until late October 1917, when the 1st Division fired the first American shell of the war toward German lines, although they participated only on a small scale. A formation of regular soldiers and the first division to arrive in France, entered the trenches near Nancy.[1]

The AEF used French and British equipment. Particularly appreciated were the French canon de 75 modèle 1897, the canon de 155 C modèle 1917 Schneider and the canon de 155mm GPF. American aviation units received the SPAD XIII and Nieuport 28 fighters and the US tank corps used the French Renault FT light tanks. Pershing established facilities in France to train new arrivals with their new weapons.[3] By the end of 1917 four divisions were deployed in a large training area near Verdun: the 1st Division, a regular army formation; the 26th Division, a National Guard formation; the 2nd Division, a combined formation of regular troops and United States Marines; and the 42nd "Rainbow" Division, a National Guard formation consisting of units from nearly every state in the United States. A fifth division, the 41st Division, had been converted into a depot division near Tours. 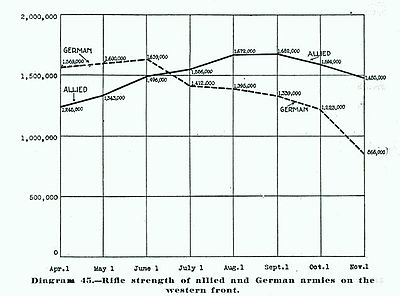 At the beginning, during the Spring of 1918, the four battle-ready U.S. divisions were deployed under French and British command to gain combat experience by defending relatively quiet sectors of their lines. After the first offensive action and American-led AEF victory on 28 May 1918 at the Battle of Cantigny,[5] by the U.S. 1st Division, and a similar local action by the 2nd Division at Belleau Wood beginning 6 June, both while assigned under French Corps command, Pershing worked towards the deployment of an independent US field Army. The rest followed at an accelerating pace during the spring and summer of 1918. By June Americans were arriving in-theatre at the rate of 10,000 a day; most of which entered training by British, Canadian and Australian battle-experienced officers and senior non-commissioned ranks. The training took a minimum of six weeks due to the inexperience of the servicemen.

The first offensive action by AEF units serving under British command was by 1,000 men (4 companies from the 33rd Division AEF), with the Australian Imperial Force (AIF) during the Battle of Hamel on 4 July 1918. (Corporal Thomas A. Pope was awarded the Medal of Honor for this battle.) This battle took place under the overall command of Australian Corps Commander Lt. General Sir John Monash. The Allied force in this battle combined artillery, armor, infantry, and air support (Combined arms), which served as a blueprint for all subsequent Allied attacks using "tanks".[6] 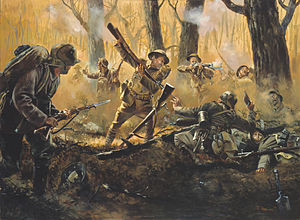 Americans in the Champagne-Marne offensive, 1918.

U.S. Army and Marine Corps troops played a key role in helping stop the German thrust towards Paris, during the Second Battle of the Marne in June 1918 (at Château-Thierry and Belleau Wood). The first major and distinctly American offensive was the reduction of the Saint Mihiel salient in September 1918. During the Battle of Saint-Mihiel, beginning September 12, 1918, Pershing commanded the U.S. First Army, comprising seven divisions and more than 500,000 men, in the largest offensive operation ever undertaken by United States armed forces. This successful offensive was followed by the Meuse-Argonne offensive, lasting from September 26 to November 11, 1918, during which Pershing commanded more than one million American and French combatants. In these two military operations, Allied forces recovered more than 200sqmi (488sqkm) of French territory from the German army. By the time the Armistice had suspended all combat on November 11, 1918, the American Expeditionary Forces had evolved into a modern, combat-tested army.[1]

Late in the war American units ultimately fought in two other theaters at the request of European powers. Pershing sent troops of the 332nd Infantry to Italy, and President Wilson agreed to send troops, the 27th and 339th Infantry Regiments, to Russia.[7] These latter two were known as the American Expeditionary Force Siberia,[8] and the American Expeditionary Force North Russia.[9] 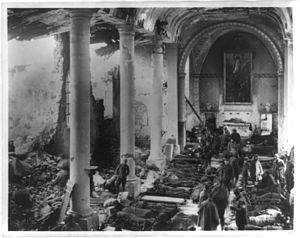 The influenza pandemic during the fall of 1918 took the lives of more than 25,000 men from the AEF while another 360,000 became gravely ill. Other diseases were relatively well controlled through compulsory vaccination. Typhoid fever was also practically eliminated. Relatively few men suffered actual injury from poison gas, although much larger numbers mistakenly thought that they had been exposed.[7]

Using questionnaires filled out by doughboys as they left the Army, Gutièrrez reports that they were not cynical or disillusioned. They fought "for honor, manhood, comrades, and adventure, but especially for duty."[11] 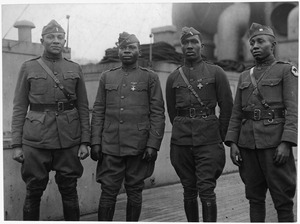 African Americans were drafted on the same basis as whites and made up 13% of the draftees. By the end of the war, over 350,000 African-Americans had served in AEF units on the Western Front. However, they were assigned to segregated units commanded by white officers. One fifth of the black soldiers sent to France saw combat, compared to two-thirds of the whites. They were 3% of AEF combat forces and under 2% of battlefield fatalities.[12] "The mass of the colored drafted men cannot be used for combatant troops", said a General Staff report in 1918, and it recommended that "these colored drafted men be organized in reserve labor battalions." They handled unskilled labor tasks as stevedores in the Atlantic ports and common laborers at the camps and in the Services of the Rear in France.[13] The French, whose front-line troops were resisting combat duties to the point of mutiny, requested and received control of several regiments of black combat troops.[14] Kennedy reports "Units of the black 92nd Division particularly suffered from poor preparation and the breakdown in command control. As the only black combat division, the 92nd entered the line with unique liabilities. It had been deliberately dispersed throughout several camps during its stateside training; some of its artillery units were summoned to France before they had completed their courses of instruction, and were never fully equipped until after the Armistice; nearly all its senior white officers scorned the men under their command and repeatedly asked to be transferred; the black enlisted men were frequently diverted from their already attenuated training opportunities in France in the summer of 1918 and put to work as stevedores and common laborers."[15]

The 369th, 370th, 371st, and 372nd Infantry Regiments (nominally the 93rd Division, but never consolidated as such) served with distinction under French command with French colonial units in front-line combat. The French did not harbor the same levels of disdain based on skin color and for many Americans of an African-American descent it was a liberating and refreshing experience.[citation needed] These African-American soldiers wore American uniforms, some dating from the time of the Union Army, with French helmets and were armed with French Model 1907/15 8mm Lebel Berthier rifles manufactured by Remington Arms rather than the M1903 Springfield or M1917 Enfield rifles issued to most American soldiers.[16] One of the most distinguished units was the 369th Infantry Regiment, known as the Harlem Hellfighters. The 369th was on the front lines for six months, longer than any other African-American regiment in the war. One hundred seventy-one members of the 369th were awarded the Legion of Merit.[17] One member of the 369th, Sergeant Henry Johnson, was awarded the French Croix de guerre,[18] and posthumously the Medal of Honor.[19]