The American Federation of Teachers (AFT) is an American labor union that primarily represents teachers. The union was founded in Chicago in 1916.[3] A precursor to the group, the American Federation of Teachers and Students, was founded in 1900.[4] Approximately 60% of AFT's membership works directly in education, with the remainder of the union's membership composed of paraprofessionals and school-related personnel; local, state and federal employees; higher education faculty and staff, and nurses and other healthcare professionals.[5] The AFT's affiliations include the trade union federation since its founding, the old American Federation of Labor until 1955, and the AFL-CIO. 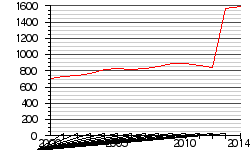 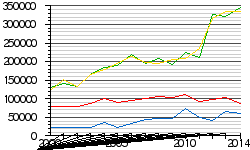 AFT was founded in Chicago, Illinois, on April 15, 1916. By 1919, AFT had 100 local affiliates and a membership of approximately 11,000 teachers, which amounted to 1.5% of the nation's teaching force. In its early days, AFT distinguished itself from the National Education Association (NEA) by its exclusion of school administrators from membership. Facing opposition from politicians and boards of education, membership in AFT declined to 7,000 by 1930. During this period, the organization had little impact on local or national education policy.[5]

AFT membership climbed during the Great Depression, reaching 33,000 by 1939. During the 1930s, AFT, whose members had historically been primary school teachers, saw influential college professors join the union. Also during the 1930s, the Communist Party gained influence within the AFT.[5] In 1941, under pressure from the AFL, the union ejected three local unions in New York City and Philadelphia for being communist-dominated. The charter revocations represented nearly a third of the union's national membership.[7]

Since 1977, AFT has published a quarterly magazine for teachers covering various issues about children and education called American Educator. In 1998, the membership of the NEA rejected a proposed merger with AFT. The AFT's membership is half that of the NEA's.[5]

In 1974, Albert Shanker was elected president of AFT. He served in this role until his death on February 22, 1997.[8] For 27 years, Shanker wrote a weekly column entitlted "Where We Stand" that ran as an advertisement in the The New York Times. Shanker was an early advocate of charter schools.[8] He also called for a national competency test for teachers, merit pay for teachers, and more rigorous requirements for high school graduation.[9] During his tenure as AFT president, Shanker was jailed twice for leading illegal strikes.[10]

Sandra Feldman served as AFT's president from 1997 to 2004. Feldman helped craft the No Child Left Behind Act.[11]

Edward J. McElroy, the AFT's secretary-treasurer since 1992, was elected president of the AFT in 2004, replacing Feldman.[12] On February 12, 2008, McElroy announced he would retire at the union's regularly scheduled biennial convention in July. On July 14, 2008, Randi Weingarten was elected to succeed him.[13]

On July 14, 2008, Randi Weingarten, then the head of the UFT, was elected to succeed McElroy as AFT president. In September 2008, she announced the launch of the AFT Innovation Fund, a union-led, private foundation-supported effort to provide grants to AFT unions to develop and implement innovations in education.[14] In 2014, Weingarten announced that AFT was ending a five-year funding relationship between the Bill & Melinda Gates Foundation and the AFT Innovation Fund.[15] According to Department of Labor filings, Weingarten earned nearly $560,000 in total compensation during the 2013-2014 school year.[16][17]

In July 2015, AFT endorsed Democrat Hillary Clinton in the 2016 presidential race. Clinton and AFT president Randi Weingarten are longtime friends.[19] AFT's official endorsement of Clinton caused controversy among some AFT members who felt that the endorsement came too soon and did not reflect the wishes of rank-and-file AFT members, some of whom support Bernie Sanders.[20][21]

Since 1980, AFT and the NEA have contributed nearly $57.4 million to federal campaigns, an amount that is about 30 percent higher than any single corporation or other union. About 95 percent of political donations from teachers unions have gone to Democrats.[22]

Members' dues underwrite much of AFT's political activities.[23][24] In 2015, four California teachers sued AFT and its California unit, the California Federation of Teachers, over the use of member dues for political activities. The plaintiffs argued that unions were violating their constitutional right to free speech by forcing them to either support union-favored causes and candidates or lose access to important job benefits such as disability and life insurance.[25]

In 1951, the union stopped chartering segregated locals.[28] It filed an amicus brief in the 1954 U.S. Supreme Court desegregation case Brown v. Board of Education. In 1957, the AFT expelled all locals that refused to desegregate. This resulted in the loss of over 7,000 members.[7] In 1963, the AFT actively supported the March on Washington for Jobs and Freedom.[7]