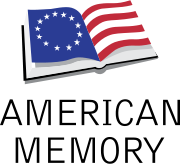 American Memory is an Internet-based archive for public domain image resources, as well as audio, video, and archived Web content. It is published by the Library of Congress. The archive came into existence on October 13, 1994, after $13 million was raised in private donations.[1]

The pilot for the American Memory project was a digitization program which started in 1990. Selected Library of Congress holdings including examples of film, video, audio recordings, books and photographs were digitized and distributed on Laserdisc and CD-ROM. When the World Wide Web accelerated in 1993, the pilot program was refocused to deliver digitized materials by way of the internet.[2][3]

The National Digital Library was created through bipartisan support in the United States Congress. Initially publicly funded with $15 million over five years, a public-private partnership of entrepreneurs and philanthropists led to more than $45 million in private sponsorship from 1994 through 2000.

Beginning in 1996, the Library of Congress sponsored a three-year competition with a $2 million gift from the Ameritech Corporation to enable public, research, and academic libraries, museums, historical societies, and archival institutions (with the exception of federal institutions) to digitize American history collections and make them available on the Library’s American Memory site. The competition produced 23 digital collections that complement American Memory, which now features more than 100 thematic collections.

The National Digital Library exceeded its goal of making five million items available online by 2000. American Memory will continue to expand online historical content as an integral component of the Library of Congress’s commitment to harnessing new technology as it fulfills its mission "to sustain and preserve a universal collection of knowledge and creativity for future generations."[1]