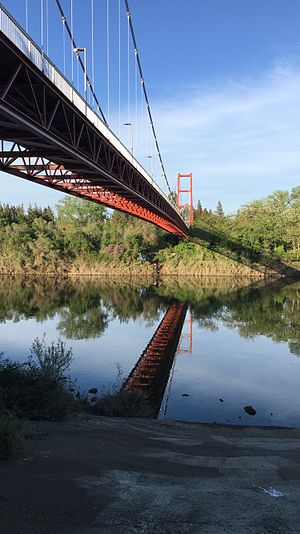 The Maidu peoples inhabited the American River in Sacramento for thousands of years before foreigners settled the region. They utilized the vast amount of resources of the American River for shelter, clothes, baskets, and other goods before European traders and Spanish colonization happened.[10] Mexico later gained their independence from Spain and took control of California, until the Mexico Cession of 1848 where California ceded to the United States in the Treaty of Guadalupe Hidalgo.[10]

The California Gold Rush started in 1848 when James Marshall, an employee of John Sutter, found gold on the American River. The South Fork of the American River, in particular, continued to be one of the top destinations for early miners looking for gold. However, shortly after the success of small prospectors, large companies came to use hydraulic mining to access larger returns of gold for profit. Unfortunately, this large and extensive mining practice washed away entire mountainsides and heavily polluted all the waterways, including the American River.[11]

The lower American River has been one of seven California rivers to achieve the designation "Recreational River" under both the California Wild and Scenic Rivers Act (1972) and the National Wild and Scenic Rivers Act (1980). This status provides state and national recognition to protect the river's outstanding scenic, fish and wildlife, historic, cultural, and recreational values.[12]

The American River is divided into the North, Middle, and South forks, which are located in El Dorado County, Placer County, and Sacramento County. The river's three forks originate in the Tahoe and Eldorado National Forests.[13] 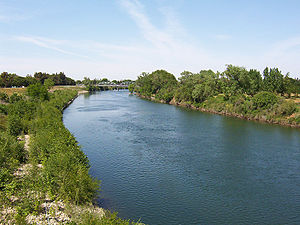 From the confluence at Auburn, the combined North and Middle Forks river flows at an elevation of 600 feet (180 m) in a forested canyon 800 feet (240 m) deep and is called the North Fork. It meanders through additional canyons past the site of the abandoned Auburn Dam to where it meets the South Fork at Folsom Lake. All three forks are known for their verdant canyons, forested ridges, massive rock formations, trails, backcountry winter adventuring among snowy peaks, fishing and white water rafting. There are various fish species that live within the American River such as Chinook Salmon and Steelhead Trout.[14]

Below Folsom Lake, the river passes through an urbanized area but is buffered by a riparian park, the American River Parkway. Containing fishing and family-oriented rafting, and paved bicycling and multi-use trails, it runs 30.6 miles (49.2 km)[6] from Folsom Lake to the river's confluence with the Sacramento River. The American River Parkway incorporates Historic Leidesdorff Ranch, a 35,000-acre (140 km2) cattle and wheat agribusiness owned by the "African Founding Father of California." Jedediah Smith Memorial Trail, a meandering, uninterrupted 32-mile (51 km) cycle path, hugs the river bank from Old Sacramento to Folsom Lake. The trail was named for Smith and his men, who camped and trapped along its banks in 1828.[15]

The North Fork is the longest tributary of the American River, at 88 miles (142 km).[6] It begins at an elevation of about 7,900 feet (2,400 m) near Lake Tahoe in Placer County at Mountain Meadow Lake, just northeast of Granite Chief and immediately due west of Squaw Valley Ski Resort. It flows westward through remote wilderness areas.

The North Fork and its tributaries provides one of the most biologically diverse habitats in North America.[citation needed] The North Fork features scenic multi-use trails along forested ridgetops and riparian corridors. It flows freely as a designated National Wild and Scenic Rivers System river until a debris dam, the North Fork Dam, is reached. This dam creates Lake Clementine just north of the Foresthill Bridge and upstream of the confluence with the Middle Fork American River at Auburn. Both the North Fork and Middle Fork feature archaeological and historic sites of ancient American Indian culture and 1850s Gold Rush habitation.

The Middle Fork is 62-mile-long (100 km).[6] It originates a mere 1.7-mile (2.7 km) from the source of the North Fork on the south face of Granite Chief, between the summit and Emigrant Pass. It is characterized by somewhat broader steep canyons interspersed with reservoirs, natural waterfalls, and quiet riparian areas. The Middle Fork is used extensively for both motorized and non-motorized recreation, including fishing, white water adventuring, bicycling (mountain and road), horseback riding, trail running and hiking. It contains areas used for hydroelectric generation, mining, and agricultural timber cultivation and harvesting. 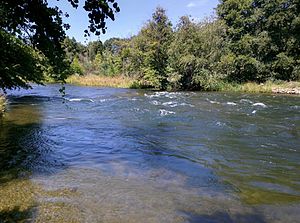 View of the America River from the William B. Pond Recreation Area 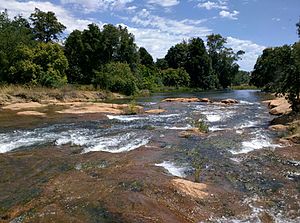 View of the America River from the William B. Pond Recreation Area

The South Fork is 87-mile-long (140 km).[6] It originates at Echo Summit near Echo Lake south of Lake Tahoe in El Dorado County, just south of where U.S. Route 50 makes a sharp curve northward to descend into Tahoe Valley. The South Fork has multi-use recreational areas, including the Rubicon Trail for motorized adventuring and whitewater rafting venues. The South Fork also features the historic town of Coloma, where the California Gold Rush began in 1848. Trout fishing and recreational gold panning are popular activities on the South Fork.

The climate of the California American River is Mediterranean. The rainy season is during winter it has very dry summers. The region is prone to seasonal drought conditions. Sacramento County in particular, which is where the entirety of the American River resides, is known for its cool winters, and hot summers, with low average precipitation. Much of the Central Valley was historically wetlands, which made the ground very fertile and attractive for agriculture, which is now what the Central Valley is known for. The American flows through this region, providing Sacramento County with its main source of drinking water, and houses a multitude of plants and wildlife. There is an abundance of flora and fauna found at the American River that creates an immensely bio diverse ecosystem.

Invasive Plants on the American River[19] 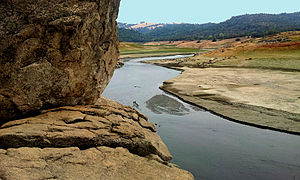 Historically, the American River, like many other rivers in California, were modified by the dams of beavers, until European trappers removed many of the beavers from their native habitat for their fur. During the California Gold Rush, which started in 1849, miners dredged the riverbed, and sent large amounts of sediment and mercury into the once wild flowing rivers. Now, dams, diversions, and pumps heavily modify the flow of the American River.The American River has been extensively dammed and diverted for hydroelectricity production. Since the California Gold Rush was centered in an area that included the American River basin, it was one of the earlier California rivers to be populated, beginning at Leidesdorff Ranch, owned by William Leidesdorff. Water was used to drive grist mills.

Dams on the American River

Folsom Dam was built in 1955 as a part of the Central Valley Project by the Army Corps of Engineers, and is operated by the Bureau of Reclamation. The concrete structure runs 9 miles wide and creates Folsom lake, which features 10,000 miles of surface acres of water. The dam is a multipurpose facility that acts as a reservoir for agricultural, domestic and industrial use, as well as hydropower generation, recreation, and fish and wildlife habitat.[24] Nimbus Dam is seven miles down stream from Folsom Dam to help regulate the amounts of releases from Folsom Dam.[25]

Power on the American RIver

The Natoma Company completed its Folsom Powerhouse by 1895 and began delivering power 22 miles (35 km) away to the city of Sacramento to power a streetcar system.

Currently, five power plants on the Middle Fork are owned by the Placer County Water Agency, eight plants are owned by Sacramento Municipal Utility District ("SMUD"). The El Dorado Irrigation District owns the Akin Powerhouse, and PG&E owns the Chili Bar Powerhouse. The Rock Creek Powerhouse is owned by a small private company. The 8 SMUD plants are run on a peaking basis, although recreational boating and environmental flow requirements constrain their operation slightly. None of these upstream plants are constrained by flood control requirements of the upstream tributaries, the needs of water supply and flood control largely govern their operation.

Chinook Salmon are a threatened anadromous fish species that have historically used the American River as a location for an important part of their life cycle while in freshwater. The American River, however, has lost some of its natural flow and riverbed because of water projects and diversions. The American River Salmonid Spawning and Rearing Habitat Restoration project, which started in 2008, entails the placement of gravel to provide adequate habitat conducive to the salmonid’s needs for spawning and rearing to reach a maturity level fit for the ocean. From 2008 to 2012, the placement totaled 85,880 tons of gravel. The gravel will increase the number of fish redds, spawning nests, along the American River, which will decrease egg retention, and increase birth and survivorship rate. The project also included the introduction of small islands, loose woody debris, and larger boulders to advance the rearing habitat for the anadromous fish and increase biodiversity of the American River.[28][29][30]

The American River is utilized for a variety of recreational uses. Locals and travelers alike use the river’s scenic landscape for bird watching, hiking, biking, fishing, river rafting, kayaking, and more. Although the American River allows small motor boats for part of the year, it remains free from speed boats or boats that use fuel, which makes it a clean, biodiverse river that people can safely swim in and do other recreational activities in.