A compromise measure, the Act gives permanence to the lower rate of much of the Bush tax cuts, while retaining the higher tax rate at upper income levels that became effective on January 1 due to the expiration of the Bush tax cuts. It also establishes caps on tax deductions and credits for those at upper income levels. It does not tackle federal spending levels to a great extent, rather leaving that for further negotiations and legislation. The American Taxpayer Relief Act passed by a wide majority in the Senate, with both Democrats and Republicans supporting it, while most of the House Republicans opposed it.

In all, the bill included $600 billion over ten years in new tax revenue, about one-fifth of the revenue that would have been raised had no legislation been passed. For the tax year 2013, some taxpayers experienced the first year-to-year income-tax rate increase since 1993, although the rate increase came about not as a result of the 2012 Act, but as a result of the expiration of the Bush tax cuts. The new rates for income, capital gains, estates, and the alternative minimum tax would be made permanent.[2][4]

The passage of the bill came after days of negotiations between Senate leaders and the Obama administration, with the final agreement being attributed to talks between Vice President Joe Biden and Senate Minority Leader Mitch McConnell.[12][13] Some Democrats criticized the bill for not raising taxes on the wealthy more, while Republicans criticized it for raising tax rates while not providing explicit spending cuts.[2][4] The final actions on the bill came during Congressional sessions on New Year's Eve and New Year's Day.

The prospect was raised that the House would pass an amended bill that included $300 billion in spending cuts.[12] But it was determined to be unlikely that the Senate would vote on any amended legislation before the end of the 112th Congress at noon on January 3, 2013 (all legislation under consideration expires at the end of each Congress), and failure to pass a bill and thus prolong the time over the cliff was seen as politically disadvantageous by the Republican leadership, and so the House moved towards a vote the same day.[14]

Speaker of the House John Boehner voted for the bill, a break from the usual custom of the speaker not voting at all. The action by the House in bringing the bill up was itself a break from the normal "Hastert rule" as well, in that a majority of the majority Republican caucus did not support it.[13]

The House's passage brought to a close what the Associated Press called "Congress' excruciating, extraordinary New Year's Day approval of a compromise averting a prolonged tumble off the fiscal cliff." Minutes later, the president flew back to Hawaii to rejoin his family for their holiday vacation.[13] Obama signed the official copy of the bill by autopen from there late on January 2, 2013.[18] 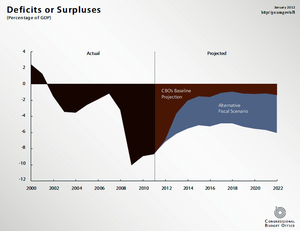 Budget deficits, projected through 2022. The "CBO Baseline" (in red) assumed significant deficit reduction due to the expiration of the Bush tax cuts and implementation of spending cuts under the Budget Control Act of 2011. The "Alternative Scenario" (in blue) did not. The American Taxpayer Relief Act of 2012 deficit path is slightly below the Alternative scenario.
File:ATRA Deficit Scenarios - v1.png
Three CBO deficit scenarios related to the American Taxpayer Relief Act of 2012 (ATRA) and the Fiscal Cliff. The blue line (August 2012 baseline) was the "current law" baseline, with tax increases and spending cuts that would take effect if laws were not changed. The grey line (March 2012 alternative baseline) was the "current policy" baseline, which represented the avoidance of the tax increases and spending cuts. The orange line (February 2013 baseline) was the post-ATRA result.[19]

The Congressional Budget Office (CBO) analyzes the effects of legislation on the deficit and economy. Describing the effects of the American Taxpayer Relief Act (ATRA) depends on which baseline is used in comparison.

The CBO reported its estimates of the budgetary effects of ATRA on January 1, 2013. These effects were measured relative to the CBO's March 2012 "Baseline scenario", which assumed significant deficit reduction due to the expiration of the Bush tax cuts and implementation of spending cuts under the Budget Control Act of 2011.

For comparison, the CBO's "Alternative Scenario", which assumed the Bush tax cuts would be extended and the spending cuts in the Budget Control Act avoided, assumed $10,731 billion in cumulative deficits during the 2013–2022 period.[22] The ATRA results in $6,858 billion in cumulative deficits, roughly splitting the difference between the two scenarios. In other words, ATRA improves the deficit picture relative to the Alternative scenario, but worsens it relative to the Baseline scenario.

CBO separately indicated in January 2013 that $600 billion in additional interest costs over the 2013–2022 period were not included in their initial assessment discussed above. This increases the deficit estimate from $6,858 billion (Baseline scenario with ATRA adjustment above) to $7,458 billion. This additional interest cost arises due to higher deficits relative to the Baseline. While ATRA would reduce short-term economic impact due to the cliff, it would slow long-term growth relative to the lower deficit Baseline scenario.[20]

The Wall Street Journal reported that the bill's tax provisions "represented the largest tax increase in the past two decades", based on the year-to-year increase in tax rates from 2012 to 2013.[4] However, Dave Camp, the Republican chair of the House Ways and Means Committee, called the same provisions the "largest tax cut in American history", referring to the fact that the bill's tax rates replace much higher rates for 2013 that were provided for in the laws previously in effect.[24]

In a news analysis piece, The New York Times wrote that "Just a few years ago, the tax deal pushed through Congress ... would have been a Republican fiscal fantasy, a sweeping bill that locks in virtually all of the Bush-era tax cuts, exempts almost all estates from taxation, and enshrines the former president's credo that dividends and capital gains should be taxed equally and gently. But times have changed, President George W. Bush is gone, and before the bill's final passage ... House Republican leaders struggled all day to quell a revolt among caucus members who threatened to blow up a hard-fought compromise that they could have easily framed as a victory."[25]

The Committee for a Responsible Federal Budget said that the bill avoided most of the economic harm from the fiscal cliff and set useful precedents regarding paying for the sequester and doc fix but failed to include any serious entitlement reforms, enact serious spending cuts, or stabilize the debt as a share of the economy.[26] The president of The Peter G. Peterson Foundation said the fiscal cliff agreement "was a significant missed opportunity to put the nation on a sustainable fiscal path."[27] The Washington Post's editorial board said "the bill's enactment is far better than a failure by this Congress to act before it adjourns" but complained that "lawmakers seem to have gotten as close as they could to doing the bare minimum."[28]

Economist Paul Krugman wrote that ATRA allowed liberals to avoid spending cuts or entitlement reform, while conservatives allowed income tax rate increases for the first time since 1993. Krugman believed that Obama should have bargained harder for more revenue. He also estimated that another 2% GDP in annual deficit reduction would be required over the long run to stabilize the debt situation.[29][30]