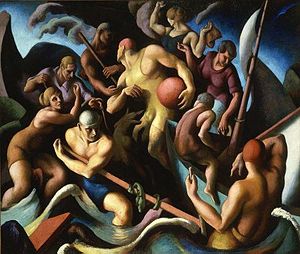 Regionalism or American Scene painting is an American realist modern art movement that was popular from 1920s through the 1950s in the United States. The artistic focus was from artists who shunned city life, and rapidly developing technological advances, to create scenes of rural life. Regionalist style was at its height from 1930 to 1935, and is best known through the so-called "Regionalist Triumvirate" of Grant Wood in Iowa, Thomas Hart Benton in Missouri, and John Steuart Curry in Kansas. During the Great Depression of the 1930s, Regionalist art was widely appreciated for its reassuring images of the American heartland.

Much of American scene painting conveys a sense of nationalism and romanticism in depictions of everyday American life. During the 1930s, these artists documented and depicted American cities, small towns, and rural landscapes; some did so as a way to return to a simpler time away from industrialization whereas others sought to make a political statement and lent their art to revolutionary and radical causes. Representative artists include Thomas Hart Benton, Jim Turnbull, John Rogers Cox, Grant Wood, John Steuart Curry, Alexandre Hogue, Dale Nichols, Edna Reindel, Sanford Ross, and William S. Schwartz. Many artists involved in the movement studied with or under Benton at the Kansas City Art Institute. Artists influenced by the Regionalist movement that studied at KCAI include John Stockton de Martelly, Frederic James and Pat Potucek.

A debate about Modernism

Before World War II, the concept of Modernism was not clearly defined in the context of American art. Central issues that were being debated at the time were who are the Modernists? and what is Modernism?. As Wanda Corn argued in her book The Great American Thing, there was also a general concern with defining what is American in American art. Many artists rejected the modern trends emanating from the Armory Show and European influences such as those from the School of Paris. Instead they chose to adopt academic realism in depicting American urban and rural scenes. Partly due to the Great Depression, Regionalism became one of the dominant art movements in America in the 1930s the other being Social Realism. At the time, the United States was still a heavily agricultural nation with a much smaller portion (than today) of its population living in industrial cities such as New York City or Chicago.

The debate over Modernism was really a conflict over who would define American art. Conservative critics who promoted Regionalism, such as Thomas Craven, often did so while complaining that Regionalism was too Modernist. It received conservative support because they saw it as a way to defeat the influence of abstraction arriving from Europe. The earlier debate between abstraction versus realism that began with the 1913 Armory Show in New York continued in the 1930s between Regionalism, Social Realism, and Abstract art. By the 1940s this debate had evolved into two “camps” that were divided geographically and politically: the Regionalists and the Social Realists whose works were realistic and who primarily lived in rural areas and whose work addressed social, economic and political issues and were promoted by conservative, anti-Modernist critics such as Thomas Craven; and the Abstract artists who primarily lived in New York City and were promoted by pro Modernist critics, writers and artists such as Alfred Stieglitz. Regionalism’s loss of status in the art world is mainly a result of the ultimate triumph of Abstract expressionism, when Modernist critics gained power in the 1940s. Regionalism’s fate (the negative perception it has today) was guaranteed partially because of the negative atmosphere promoted in the 1930s by the anti Modernist critics, and partially because the end of World War II ushered in a new era of peace and prosperity and the Cold War brought a change in the political perception of Americans.

However, Regionalism bridged the gap between a completely Abstract art and Academic realism in much the same way that Impressionism and the Post-Impressionists like Paul Cézanne, Vincent van Gogh, and Paul Gauguin among others had done in France a generation earlier. The Regionalists prepared the way for Abstract Expressionists to emerge in America. Jackson Pollock’s power as an artist was reinforced and he was encouraged and he benefited from the influence of Thomas Hart Benton in the art classes that Pollock took under Benton; while a student at the Art Students League of New York. Regionalism had a catalytic effect on later American art in a similar way that Post-Impressionism in Europe did via Fauvism, Expressionism, Cubism and other movements.

In Grant Wood's pamphlet Revolt Against the City, published in Iowa City, 1935, he asserts that American artists and buyers of art were no longer looking to Parisian culture for subject matter and style. Wood wrote that Regional artists interpret physiography, industry, and psychology of their hometown, and that the competition of these preceding elements creates American culture. He wrote that the lure of the city was gone, and hopes that art of the widely diffused "whole people" would prevail. He cites Thomas Jefferson's characterization of cities as "ulcers on the body politic."