From Infogalactic: the planetary knowledge core
Jump to: navigation, search
For other uses, see Americana (disambiguation). 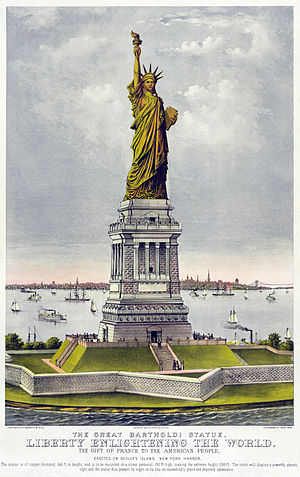 Liberty Enlightening the World: the famous New York landmark, illustrated in a print by Currier and Ives

Americana refers to artifacts, or a collection of artifacts, related to the history, geography, folklore and cultural heritage of the United States.[1][2] Many kinds of material fall within the definition of Americana: paintings, prints and drawings; license plates or entire vehicles, household objects, tools and weapons; flags, plaques and statues, and so on. Patriotism and nostalgia play defining roles in the subject. The things involved need not be old, but need to have the appropriate associations. The Atlantic described the term as "slang for the comforting, middle-class ephemera at your average antique store—things like needle-pointed pillows, Civil War daguerreotypes, and engraved silverware sets."[3] The term may be used to describe the theme of a museum or collection,[4][5] or of goods for sale.[6]

The term can also be used to describe studies of American culture, especially studies based in other countries.[7] Americana music is contemporary music that incorporates elements of various American roots music styles, including country, roots-rock, folk, bluegrass and blues, resulting in a distinctive roots-oriented sound.[8][9]

From the mid through late 20th Century, Americana was largely associated with nostalgia for an idealized life in small towns and small cities in America around the turn of the century, from roughly 1880 to the First World War, popularly considered "The Good Old Days".[10] It was believed that much of the structure of 20th Century American life and culture had been cemented in that time and place. Henry Seidel Canby wrote "[I]t is the small town, the small city, that is our heritage. We have made twentieth-century America from it, and some account of these communities as they were ... we owe our children and grandchildren."[11] The nostalgia for this period was based on a remembrance of confidence in American life in this period, due to such factors as a sense that the Frontier had been "conquered" with the US Census Bureau's declaration that it was "closed" in 1890, as well as the recent victory in the Spanish–American War.[10] As Canby put it, Americans at this time "really believed all they heard on the Fourth of July or read in school readers. They set on one plane of time, and that the present, the Declaration of Independence, the manifest destiny of America, the new plumbing, the growth of the factory system, the morning paper, and the church sociable. It was all there at once, better than elsewhere, their own, and permanent. ... They had just the country they wanted...and they believed it would be the same, except for more bathtubs and faster trains, forever ... for the last time in living memory everyone knew exactly what it meant to be an American."[11] The zeitgeist of the idealized period is captured in the Disneyland-style theme parks' Main Street, U.S.A. section (which was inspired by both Walt Disney's hometown of Marceline, Missouri and Harper Goff's childhood home of Fort Collins, Colorado),[12] as well as the musical and movie The Music Man and Thornton Wilder's stage play Our Town.[10] Especially revered in Americana nostalgia are small town institutions like the barber shop[13] and the drug store/soda fountain and ice cream parlor,[14] the latter which would be resurrected by mid-twentieth century nostalgia for this time period in businesses like the Farrell's Ice Cream Parlour chain with its 1890s theme.[15]