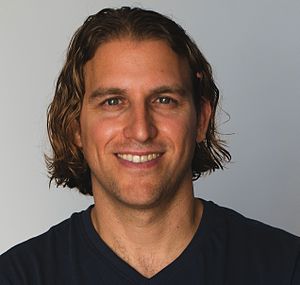 Amit Offir (Hebrew: עמית אופיר) (born July 16, 1978) is a popular Israeli author, illustrator and comics artist. Offir's books are addressed to both children and adults. Offir's first book, The Beetle That Wants To Be, was published in Israel on 2000 and soon became a bestseller. In 2013 the book was also published in English. Over the years, Offir has published many books which has been translated to over 30 languages.[1]

Drawing Easily is a drawing technique by Amit Offir

Amit was born in Israel in the city Or Yehuda and studied at Moshe Sharet high school in the city of Netanya. Later on he went to study animation at Bezalel Academy of Arts and Design in Jerusalem.

Offir has developed a unique drawing technique that breaks down all characters into Five simple steps. He named it Drawing Easily.[2] This technique was invented in 2005 after Offir has drawn over 500,000 drawings on pebbles.[3] Offir's books teach people from all around the world how to draw and communicate through drawing.

Amit's first book was published in the year 2000 while Amit was 21 years old. Between the years 2000-2002 Amit was travelling in South America and started working in a guesthouse in Brazil on the island of Morro de Sao Paulo [4]

Offir has also written and created many books for empowerment, time management, Travelling and developing methods that help millions of people to live better lives and enjoy his unique knowledge.

On the year 2014 Amit's book 24/8 - The Secret for being Mega-Effective by Achieving More in Less Time.[5] On the year 2015 the book was published in a special edition with Eyal Nir in Polish by Wena publish house.[6]

One of his methods for time management is called The domino reaction. This view of the Domino Reactions method is explored further in the book 24/8 – The Secret for being Mega-Effective by Achieving More in Less Time.