Saint "Amphibalus" is venerated as the early Christian priest who converted Saint Alban to Christianity. Alban sheltered the priest from religious persecution for a number of days, during which time Alban was so impressed with the priest's faith and teaching that Alban began to emulate him in worship, and became a Christian. When Roman soldiers came to seize the priest, Alban put on the priest's clothing and cloak, and went with the soldiers in the priest's stead. After Alban's martyrdom, Amphibalus escaped, but was eventually caught and also martyred.

In the earliest accounts of the St. Alban story, such as the ones found in Gildas (c. 570) and Bede (c. 730), the priest is unnamed. It is not until the 12th century when he comes to be called "Amphibalus," and it is very unlikely that this was the genuine name of the priest. He is first called "Amphibalus" by Geoffrey of Monmouth, who may have misunderstood the Latin word used for the cloak, amphibalus, that was worn by Saint Alban.[1] However, it is also possible that Geoffrey is simply repeating a name for the priest that had come into common usage by his time.

Most of what is known of Amphibalus's life is derived from hagiographic texts centered on Saint Alban, mostly written hundreds of years after his death; his real name is not recorded. He was believed to be a citizen of Caerleon during the 3rd or 4th century.[2] During a religious persecution, Alban sheltered him the priest from persecutors in his home. Amphibalus was very pious and faithful, and while in Alban's home, he prayed and kept watch both day and night, and instructed Alban with "wholesome admonitions," to the point where he inspired Alban to cast off his previous religious beliefs and emulate him in his Christian faith. Alban was so inspired by his guest that, seeking to save his life, Alban offered up his own instead.[3] 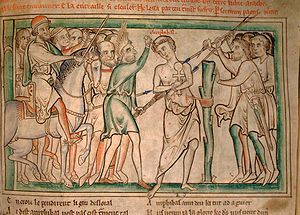 The martyrdom of St. Amphibalus from a 13th Century manuscript of The Life of St. Alban (Dublin, Trinity College Library)

After the martyrdom of Alban, Amphibalus was believed to have returned to Caerleon, where he converted many others to Christianity, including the Saints Julius and Aaron. It was believed that he was eventually captured by the Romans and returned to Verulamium, where he too was martyred for his faith. Where and how he was killed is unclear: different sources say he was beheaded and stabbed, and a later development in the legend says that Amphibalus, with some companions, was stoned to death a few days afterwards at Redbourn, four miles from St. Albans.[1]

In 1178, some 800 years after his traditional death date, his remains were discovered at Redbourn in Hertfordshire, England, near the town of St Albans. According to the tale, Saint Alban appeared in a vision to a monk named Robert, indicating that he wished to make known the location of the remains of Amphibalus. Robert rose, and was led by the saint to the spot where the remains of Amphibalus and his companions lay. Healing miracles occurred on the spot, and the abbot ordered the site to be excavated. Several bodies were discovered, and one body seemed consistent with manner of Amphibalus' death. It was removed to Saint Alban's, where a shrine was constructed for the veneration of the relics.[4]

The first shrine in the Norman Abbey of St. Alban's stood before the Great Rood Screen, near the high altar, on the north side of the shrine of St. Alban. However, in 1323, a portion of the abbey roof collapsed, damaging the shrine. It was then moved to the north aisle of the presbytery. Eventually, around 1350, he was given a more suitable position in the center of the retrochoir, just east of St. Alban's own shrine in the 'Saint's Chapel', complete with a stone tomb, paintings, and a silver gilt plate.[5]

During the dissolution of the monasteries under Henry VIII, the shrine was destroyed, and the pieces used to block the eastern arches of "Saints Chapel." The relics themselves were scattered and lost. The remains of the shrine were discovered in the 19th century during renovations, and were reassembled in 1872 under the direction of Sir George Gilbert Scott. Today, the reassembled stone shrine can be seen in St. Alban's cathedral.

Traditionally, Amphibalus' feast day was held in June, with various sources saying it was held on the 22nd, the 24th, and the 26th. Winchester Cathedral was under the patronage St Amphibalus before it was dedicated to St Swithun.[6]